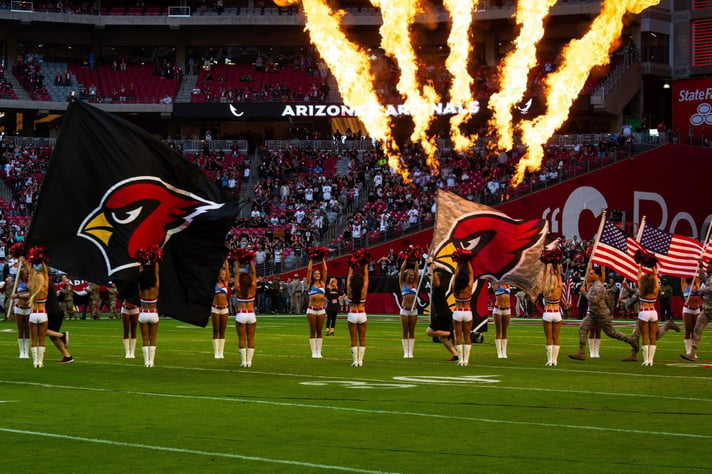 Through almost a third of the season, we look ahead to the seventh week of the NFL season and which teams you might want to bet on at NFL betting sites.

Bookmakers.com is here to guide you through the odds and market lines ahead of Week 7 of the regular season, so you can make the best possible NFL picks at NFL betting apps.

The New Orleans Saints and Arizona Cardinals have nearly split their head-to-head record 16-15-0 in favor of this week's road team. Will the split be equal come the end of Week 7?

Can the return of DeAndre Hopkins help to turn around what is looking increasingly like a lost season for the Cardinals? Can he do enough to turn down the temperature on Kliff Kingsbury's seat. Dennis Allen is finding out for a second time in his career what being a head coach without a viable starting quarterback is like, and the results aren't pretty.

The Green Bay Packers have won the last two times they have played the Washington Commanders including in Week 7 in the 2021 season.

If they can't do the same again, Aaron Rodgers and co. could be in for a long season. They've lost their last two to previous laughing stocks in the two New York teams. Rodgers looks lost with Davante Adams after his trade in the offseason. Commanders coach Ron Rivera gave an impassioned defense of Carson Wentz last week, but there are too many holes in this Washington team to think they might make some noise come January.

For the last few seasons it has seemed as if the Indianapolis Colts and Tennessee Titans were the only contenders in the AFC South, but they have started off 2022 as also-rans.

Also-rans they may be, they are both at the top of the division with three wins, and a victory for either would boost their chances of winning the division exponentially. The Titans have won the last four against the Colts, including 24-17 at Lucas Oil Stadium in Week 4. If they make it five in a row, you can probably count the Colts out of the postseason.

With the Atlanta Falcons still getting to grips with life without Matt Ryan, it is understandable things haven't been all plain sailing for Marcus Mariota. The Cincinnati Bengals have got their season back on track after a slow start.

Week 6 was a triumph for the Falcons with a dominant 28-14 win over the San Francisco 49ers. That puts them in a tie for first place in the NFC South and could give them momentum heading to the season's halfway point. The Bengals sit at 3-3 and have shown they will only go as far as the team can protect Burrow under center.

The Cleveland Browns have won just one of their last five against AFC North divisional rivals, the Baltimore Ravens. That was the most recent matchup in 2021, so maybe they can repeat the trick in Week 7.

The Ravens aren't the first team to succumb to the surprising Giants this season, but after that Week 6 defeat, they sit in a tie for first place in the AFC North with the Bengals. The Browns are just a game back but were pummelled by what is looking like a resurgent Patriots team on Sunday.

After a dismal opening game of the season, the Dallas Cowboys have looked every inch the playoff contenders people presumed they would be. The Detroit Lions have shown improvement in performance, though not necessarily in the win column.

Cooper Rush came back down to earth in Week 6 with a three-interception performance in defeat to the unbeaten Eagles. That paves the way for Dak Prescott's probable return in Week 7. The Lions were blown out in Week 6 by Patriots first-rounder Bailey Zappe and will hope that isn't a harbinger of what is to come for the rest of the season.

These divisional foes have played each other 43 times in their history, with the Carolina Panthers coming out on top 24 times. However, the Tampa Bay Buccaneers have dominated the rivalry in recent times with six wins in the last seven contests.

The Panthers are in purgatory with a quarterback carousel in play during the season and an interim head coach in place after Matt Rhule's firing. So the last thing they want to see is Tom Brady facing them. However, Brady has started to look closer to the 45-year-old he is this season so perhaps won't be as intimidating a figure as he has been in the past.

The Jacksonville Jaguars and New York Giants haven't made the playoffs since 2017 and 2016, respectively. However, they have played their way into contention to start the 2022 season, at least this week's road team has.

The Giants have surprised just about everyone with a 5-1 start to the season that has seen wins over 2021 playoff teams the Titans, Packers and Ravens. Saquon Barkley is the clear front-runner for Comeback Player of the Year, and he's running them towards the playoffs. The Jaguars have now lost three in a row and are starting to look like next season might be their year, not this.

With second-year signal-caller Zach Wilson back under center for the New York Jets, they will hope to hang onto the coattails of an AFC wild-card spot. One of the teams they may be competing with are the Denver Broncos, so this could be a huge contest.

The Jets sit at 4-2 for the first time since 2015, and they have statement wins over the Dolphins and Packers the last two weeks. If Wilson limits his mistakes, this team looks built for the playoffs. The Broncos were presumed favorites for a postseason berth, but they are starting to look like they have buyer's remorse on the Russell Wilson trade and new five-year contract this offseason.

If the Las Vegas Raiders are to make it to the postseason, they will need to beat the likes of the Houston Texans on their schedule.

It won't be often that a team that has started the season 1-4 is a seven-point favorite coming into Week 7, but that is exactly what the Raiders are this week. The Raiders have lost some squeakers this season and will need to overturn that record to reach the playoffs. The Texans had looked like they were going nowhere but went on the road to beat the Jaguars in Week 5.

Geno Smith has led the Seattle Seahawks better than could have been expected, and he is a dark-horse MVP candidate through six weeks. Justin Herbert and the Los Angeles Chargers will hope they come up against a Smith off day.

This matchup is a repeat of the 2019 Super Bowl, in which Patrick Mahomes and co rallied late on to give the Kansas City Chiefs their second Super Bowl. The San Francisco 49ers and Chiefs are always among the Super Bowl favorites, and this year is no different.

The 49ers surprisingly lost easily to the Falcons in Week 6 after an off day for Jimmy Garoppolo. They will hope that doesn't continue against a Chiefs team that appears primed for the postseason once again. A 24-20 defeat to the Bills in Week 6 doesn't dampen their prospects for playoffs at this point.

The Pittsburgh Steelers have won seven of their last nine matches against the Miami Dolphins. However, all of those matchups came with Ben Roethlisberger on the Steelers roster, which is no longer the case.

The Steelers got a win in Week 6 over the Bucs on the strength of their defense and a combination of good quarterback play from Kenny Pickett and Mitchell Trubisky. Pickett exited with a concussion so will be a doubt for Week 7. The Dolphins are hoping to welcome their own starting quarterback back after a nasty concussion in both Weeks 3 and 4. The Dolphins have lost their last three in the absence of Tua Tagovailoa.

The Chicago Bears will have hoped for greater consistency from second-year quarterback Justin Fields, but we have yet to see that. Mac Jones and the New England Patriots were themselves having their own difficult second season until Jones was replaced by Bailey Zappe.

Since Jones went down with a high ankle sprain and rookie fourth-round pick Bailey Zappe took over starting duties, the Patriots have outscored the Lions and Browns 67-18. There is a quarterback controversy brewing when Jones is healthy. The Bears have lost their last three and look a little lost in Matt Eberflus' first season as head coach of the Bears.