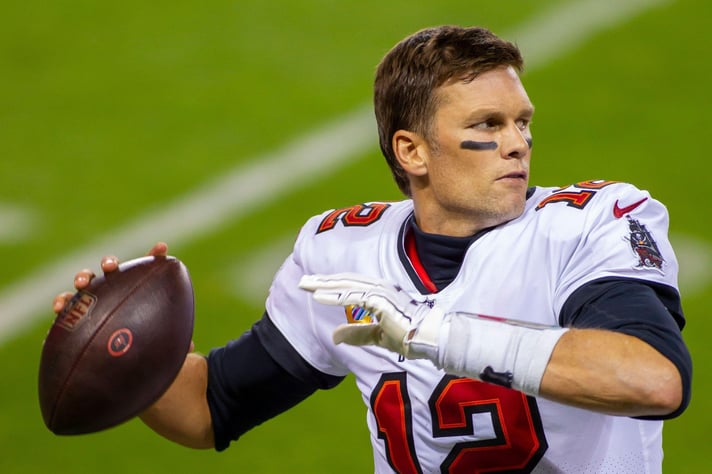 We're nearly at the halfway mark of the NFL season, and the pretenders and contenders in both the AFC and NFC have just about made themselves clear. With the help of all the odds and betting information needed, Bookmakers.com looks ahead to the eighth week of the season to help bettors make their choices at NFL betting sites.

Bookmakers.com is here to guide you through the odds and spread information ahead of Week 8 of the regular season, so you can make the best possible NFL picks at NFL betting apps.

Two of the preseason favorites for the Super Bowl, the Tampa Bay Buccaneers and Baltimore Ravens take center stage under the bright lights of Thursday Night Football in Week 8.

Tom Brady and the Bucs are going backwards in the competitive NFC conference. They have lost four of their last five including an embarrassing 21-3 defeat to the laughing stock that is the Panthers in Week 7. The Ravens recovered from their Week 6 defeat to the Giants to beat divisional rivals, the Browns, and keep their lead atop the AFC North.

A new era was supposed to be under way in Colorado this season after the Denver Broncos traded the farm for Russell Wilson. Things haven't been all rosy for the Broncos, and they travel to London to face a Jacksonville Jaguars that is starting to fall apart at the seams after a strong start to the season.

Wilson missed Week 7's 16-9 defeat to the Jets with a partially torn hamstring, so his status is up in the air for London. The Broncos have been held to fewer than 20 points in six of their seven so far. The Jags are now losers of four on the bounce after starting the season 2-1. This may not be the prettiest game to have been played in England.

The New England Patriots have absolutely dominated their rivalry with the New York Jets in recent times, winning the last 12. However, is there a changing of the tide in year two of Robert Saleh and Zach Wilson at the Jets?

The Patriots have a question to answer at quarterback before this matchup. Is Mac Jones the guy or will Bailey Zappe be starting from now on? Their 33-14 defeat to the Bears on Monday Night Football didn't look good. The Jets are 5-2 for the first time since 2010 after winning four straight.

It wouldn't have been prescient to say at the start of the season that both the Philadelphia Eagles and Pittsburgh Steelers fanbases would have been hoping for postseason football come January. The two franchises have been on divergent paths since, with the Eagles hoping for more than just the postseason.

The Eagles are the last remaining unbeaten team in the league and come into this tilt with the Steelers well rested after a bye in Week 7. Pittsburgh, on the other hand, have questions at most spots on the roster but none more so than at quarterback after losing five of their last six.

Two teams expected to be competing for glory in the NFC in 2022, the Minnesota Vikings and Arizona Cardinals will hope to strengthen their postseason cases in this big Week 8 matchup.

Have the Cardinals got their season back on track after a Week 7 win over the Saints? With DeAndre Hopkins back in the lineup, they will certainly hope so. A test awaits against the rested Vikings, who come out of their bye having won four consecutive matches.

The Carolina Panthers looked set for another lost season under Matt Rhule until they fired him following Week 5's defeat to the 49ers. While this season is still not going to be especially pretty, hope springs eternal for the team's rebuild. The Atlanta Falcons have been going through their own rebuild this season, with mixed results.

When franchise star Christian McCaffrey was traded to the 49ers prior to Week 7, you might have been forgiven for thinking the Panthers had given up on the 2022 season. However, they then went and blew out the Bucs 21-3. The Falcons went from beating the 49ers 28-14 in Week 6 to being shellacked 35-17 by the Bengals this past Sunday. Who knows what will happen in this game.

The Dallas Cowboys entered the season dreaming of the Super Bowl, while the Chicago Bears were tempering expectations and dreaming of a winning season. Both dreams are still on nearly at the halfway point in the season.

The Bears halted a three-game losing streak on Monday Night Football with a big 33-14 win over the Patriots to inject some life into their season. Dak Prescott returned to the Cowboys lineup in Week 7 after a thumb injury, and he led them to a routine 24-6 win over the Lions.

After reaching the postseason for the first time since 2016 last year, hopes were high for Josh McDaniels' first year as Las Vegas Raiders head coach. Things haven't gone to plan, and they are scrambling to save their season. The New Orleans Saints, meanwhile, are still struggling to find an identity two seasons on from the retirement of Drew Brees.

The Raiders got their second win of the season in Week 7 against the struggling Texans. They will look at their schedule for the next few weeks and think they can get back into the playoff conversation but will need to start against the Saints. New Orleans has lost five of seven to open the season so look ripe to be beaten once again.

There are no guarantees in football, but the one thing you would expect to see when the Miami Dolphins travel to the Detroit Lions is plenty of points. The Lions have a penchant for losing high-scoring games, and the Dolphins are known for throwing the ball a lot. Feast your eyes on this Week 8 game.

The return of Tua Tagovailoa to the lineup brought the Dolphins their fourth victory of the season in Week 7 and the first since he went down with concussion. The Lions lost three of their first four by a combined 10 points. They have since lost their last two by a combined 47. This could get ugly.

From one potential barnstormer to a game that is probably best described as one for the purists. The Tennessee Titans like to run the ball as much as possible, and the Houston Texans aren't particularly good at any facet of the game.

The Titans took control of the AFC South with a 19-10 victory over the Colts in which they didn't score an offensive touchdown. The Texans are largely cannon fodder this season (don't tell the Jaguars), so the Titans should further entrench themselves as the playoff favorites from the AFC South.

This was supposed to be the Carson Wentz revenge game. When the Indianapolis Colts' season fell apart in the last two weeks of 2021, the man blamed by owner Jim Irsay - and pretty much everyone else - was Wentz. So he was jettisoned off to the Washington Commanders. The Colts have found out it may not have been one person's fault.

Wentz's shot at redemption has been put on ice after he went on injured reserve after finger surgery. In his stead, Taylor Heinicke led the team to a 23-21 win over the Packers in Week 7. The Colts have benched Matt Ryan and turned to 2021 sixth-round pick Sam Ehlinger at quarterback. Given the Colts have only scored more than 20 points once this season, if they can get to 23 again, that could be enough for Washington.

The way the season has gone so far, there may not be multiple teams qualifying for the postseason out of the NFC West. Last season, there were three teams that qualified, including this week's opponents, the San Francisco 49ers and Los Angeles Rams. A divisional victory here will help no end come January.

The 49ers have already beaten the Rams once this season, and if they were to do so again, that would put a dagger in the heart of the Rams' hopes of repeating as Super Bowl champions. The Rams will hope their bye week has given them sufficient time to get healthy ahead of this divisional matchup.

Hands up if you had the New York Giants as contenders and the Seattle Seahawks' Geno Smith as a dark-horse MVP candidate through the first seven weeks. Strap in for the ride in Week 8.

Both bandwagons kept on rolling in Week 7, though Smith needed a large helping from impressive rookie running Kenneth Walker III, who had 168 yards and three touchdowns from 23 carries on Sunday. The Giants came back late against the Jaguars and are one of only three teams in the league with just one loss on their resume this season.

The Green Bay Packers losing to the Giants, Vikings, Jets and Commanders inside the first seven weeks was not part of the script for two-time reigning MVP Aaron Rodgers and co. Now they must make the postseason the hard way, and it doesn't come much tougher than a road trip to face the Buffalo Bills.

The Packers are in freefall after losing three straight. Aaron Rodgers has lost his air of invincibility, and he comes up against a quarterback who may have taken that from him. Josh Allen has the Bills humming, and they come into this matchup in buoyant mood after beating the Chiefs in Week 6 and getting healthy without playing in Week 7.

This AFC North tilt between the Cincinnati Bengals and Cleveland Browns feels bigger than your typical divisional matchup. With potentially one spot up for grabs in the postseason, any divisional win is huge by season's end.

After a shaky start to the season for both the Bengals and their star quarterback, Joe Burrow, things are looking better for Cincy. They have won their last two, with Burrow going for three touchdowns to no interceptions in each game. The Browns are becoming masters at losing close ones - four of their five defeats this season have come by a combined nine points.