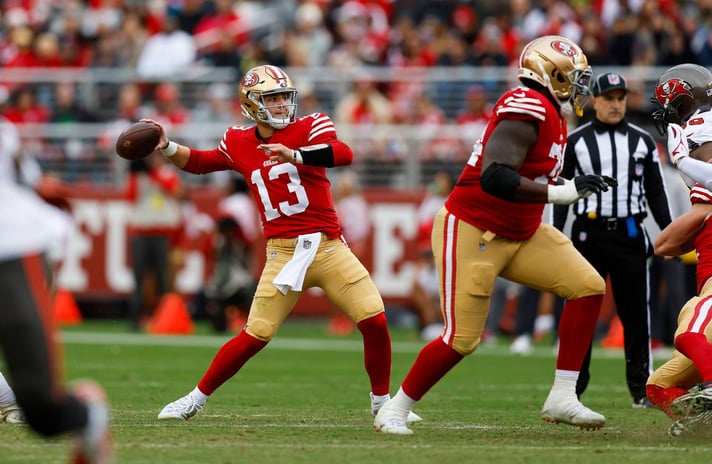 After 18 weeks of gruelling NFL regular-season action, we've only got the cream of the crop left as the postseason starts with Wild Card Weekend. Three teams - the Jaguars, Seahawks and Dolphins - secured wild-card spots with Week 18 wins, while others had been locked in for multiple weeks. At Bookmakers.com, we will try to guide you to the best possible NFL picks when visiting NFL betting sites leading up to the first week of the playoffs.

The Seattle Seahawks qualified for the postseason at the last possible moment. Having beaten the LA Rams Sunday, Seattle then needed the Detroit Lions to beat the Green Bay Packers to make the wild-card round. With under six minutes remaining, the Lions scored the go-ahead touchdown to secure Seattle's spot.

The San Francisco 49ers' qualification for the playoffs has been much more serene. They have won their last 10 matchups for the longest streak in the league. They are double-digit favorites for this matchup for good reason. These two played twice in the regular season, with San Fran winning both by a combined 28 points.

The Jacksonville Jaguars are playing playoff football for the first time since 2017. It looked an impossible task as they opened the season 3-7, while divisional rivals, the Tennessee Titans, were 7-3. But an almighty collapse that saw Tennessee lose every match from thereon in and a five-game win streak to end the season was enough for the Jags to make the postseason.

They face a Los Angeles Chargers team that had won four straight games heading into Week 18 and had already clinched a postseason berth. The Chargers lost to the lowly Denver Broncos Sunday, but they pulled their starters before the end of the game, so that shouldn't be counted against them. This could be one of the most exciting games of Wild Card Weekend.

For much of the season, the Miami Dolphins and Buffalo Bills were neck and neck in the AFC East. However, the Bills sped away to seal the division, while the Dolphins relied on a last-minute field goal to qualify for the postseason after the New England Patriots had lost on the road at the Bills.

The closeness of the matchup may hinge on whether the Dolphins have Tua Tagovailoa back in the lineup. However, the quarterback is still in the concussion protocol after suffering his third head injury of the season on Christmas Day. If he can't make it, the 11-point margin of victory some USA sports betting sites are offering in favor of the Bills may not be wide enough.

This could be the toughest matchup to call of the entire Wild Card Weekend. On paper, the 13-4 Minnesota Vikings should have no trouble with the 9-7-1 New York Giants.

However, the Vikings have ended the season in something of a relative tailspin, with three of their four defeats coming in the second half of the campaign. These two teams played on Christmas Eve, with the Vikings rallying late to win 27-24. The spread for this game? Of course, it's three points. This could be a coin toss type of game.

The Baltimore Ravens' chances of beating the Cincinnati Bengals likely hinge on whether former league MVP Lamar Jackon is healthy. Jackson has been absent for the Ravens' last five matches, in which they have gone 2-3 and haven't scored more than 17 points in a game.

There is optimism that he may recover from his knee injury in time, according to reports, but will he be healthy enough to knock off the Bengals, who have won eight straight matchups and will be one of the most feared teams in the postseason?

If you rewind back to Week 1 of the NFL season, these two teams battled it out in prime time. The postgame discourse of the 19-3 win for the Tampa Bay Buccaneers centered around the Bucs having another shot at the Super Bowl and the Dallas Cowboys being in for a long season.

The Cowboys were in with a chance of claiming the No. 1 seed in the NFC going into Week 18 before mightily struggling in a 26-6 defeat to the Washington Commanders that may ring similar alarm bells as the Week 1 loss. The Bucs became just the third team in history to win their division with a losing record. How this shakes out is anybody's guess.