The NFL's Most Expensive Touchdowns 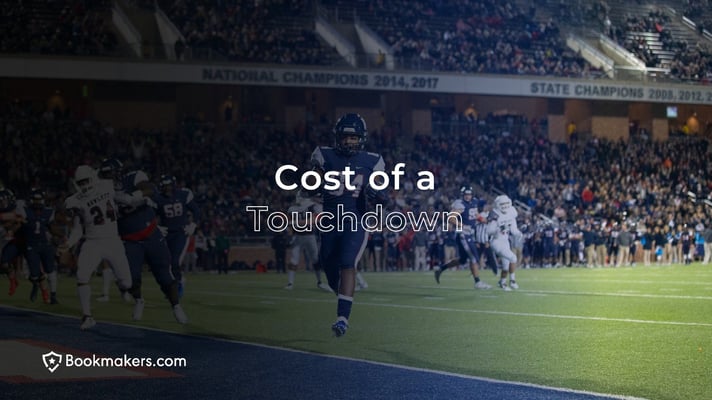 The NFL is a multi-billion-dollar phenomenon, with players on incredible salaries and fans forking out eye-watering amounts each season to support their team. But which franchises across the league got the most bang for their buck last season?

We’ve analyzed last year’s regular season results to determine just how much every touchdown, point and win cost each NFL team and its respective fanbase. Read on to see where your team ranks!

How much does a touchdown cost each NFL franchise?

Comparing each team’s salary against their total touchdowns, points and wins last season, we’ve been able to determine which spent the most (and least) on on-field success.

Which teams spent the most per touchdown?

Comparing each NFL team throughout the 2021 regular season, we can reveal the New York Giants spent the most money per touchdown last season.

Costing the franchise over $5 million per score, the Giants are the league’s biggest spenders in this department, although they’re pipped by the Jacksonville Jaguars when it comes to the cost of each individual point ($472,467) and win ($30.47 million).

The Jags also rank highly for the amount they spent per touchdown during the 2021 regular season, with each costing over $4.53 million. They also spent over half a million dollars per point, and more than $42.30 million per win.

The third-biggest-spending team in the NFL per touchdown last year was the Atlanta Falcons, with the Georgia-based franchise forking out over $4.27 million per score. They also rank third for the amount spent per point ($450,787) but drop down to seventh for spend per win ($20.16 million).

Which teams spent the least per touchdown?

At the other end of the table, the Philadelphia Eagles were the lowest-spending NFL team per touchdown, with each score costing the Super Bowl LII champions just over $2 million.

They were also the lowest-spending franchise per point last season, with each coming to a reasonable $228,854. However, they placed second-best in terms of spend-per-win ($11.29 million), behind eventual Super Bowl champions the Los Angeles Rams ($10.15 million).

Meanwhile, the Detroit Lions had the second-lowest spend per touchdown last season, coming in at a little more than $2.18 million. They also placed just behind the Eagles for spend-per-point ($235,446). However, contrastingly, the Lions’ staggering cost per win last season ($25.50 million) places them among the five highest spenders.

Finally, Super Bowl LVI victors the Rams were truly the success story of last season, also earning a spot among the best value-for-money franchises. The team ranked third for cost per touchdown and per point, coming in at just over $2.34 million and $264,820, respectively, alongside boasting the lowest spend per win.

How much does a touchdown cost each NFL fanbase?

We’ve looked at which franchises spent the most per result, but how about the fans?

Comparing the average NFL ticket price against each team’s number of touchdowns, points and wins, we’ve been able to determine which fanbase spent the most (and least) on the supporter experience last season.

Which fans spent the most per touchdown?

According to our research, New York Giants supporters spent an enormous $88.70 each per touchdown last season. Giants fans also spent the most per point ($8.24) throughout the 2021 regular season.

The next most expensive team per touchdown last season was the Las Vegas Raiders, whose supporters spent $66.73 per score. Raiders fans were also made to pay $6.91 per point, the second-most of any NFL franchise, and $276.25 per win.

Finally, Atlanta Falcons fans paid a whopping $65.98 for every touchdown during the 2021 regular season, the third most of any team in the NFL. They also spent the fourth-most per point ($6.35) and $422.28 per win – the third highest in the league.

Which fans spent the least per touchdown?

Dallas Cowboys supporters were the lowest-spenders last season, with each touchdown costing fans just $20.31. The Texas-based franchise also ranked second for fans’ cost per point ($2.74) and among the 10-best NFL teams for the cost to each supporter per win ($159.20).

The Rams may have tasted Super Bowl success last season, but it’s their city neighbors the Los Angeles Chargers whose fans were afforded some of the best value-for-money entertainment, spending just $21.15 per touchdown and $2.62 per point. However, the overall quality wasn’t quite up to the same standard, with their five home wins during the 2021 regular season costing fans $144.68 each.

All costs considered, the Rams clearly had the best value-for-money 2021 season, with the franchise and its fans witnessing the ultimate glory for pennies on the dollar. But with so much money in play across the NFL, it’ll be interesting to see how the big-spenders react.

With teams soon-to-be gearing up for another year of drama and thrills, keep up to date with the sports betting news, or check out the best NFL betting sites.

To discover how much each touchdown, point and win cost the NFL franchises, we first acquired 2021 active salary information from Spotrac. Each team’s salary was then divided by their total touchdowns, points and wins during the 2021 regular season, to determine the cost per metric.

This was then replicated for fan costs, with 2021 salaries replaced by 2021 average ticket prices. Fan data was based on the assumption that a supporter attends every home game of the regular season.