The NFL’s Most Profitable Teams to Bet On 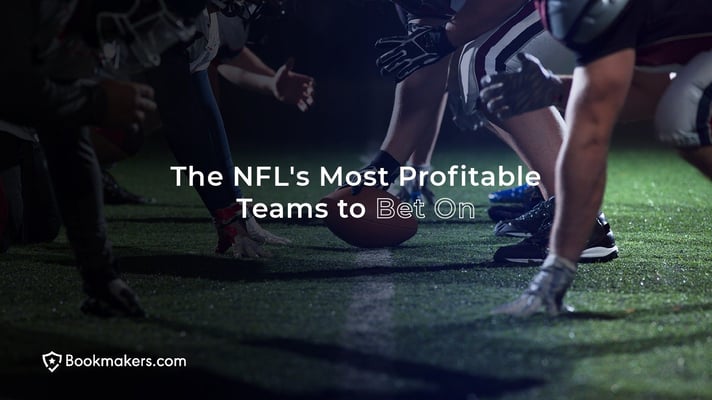 A multi-billion-dollar industry, the NFL has hundreds of millions of fans scattered around the world, with many regularly placing bets to add an even greater level of excitement to the already-exhilarating viewer experience.

And while sports betting might not have yet been adopted across all of America, it’s growing in popularity at an impressive rate – with the Super Bowl reportedly one of the most popular games to gamble on in US sport. But which teams should you put your money on, and which should you avoid?

The Most and Least Profitable NFL Teams to Bet On

Have you ever wondered which teams you’re best (and worst) off putting your money on throughout the season? We’ve revealed last season’s biggest winners and losers, if you’d bet $100 on each team to win every single game. 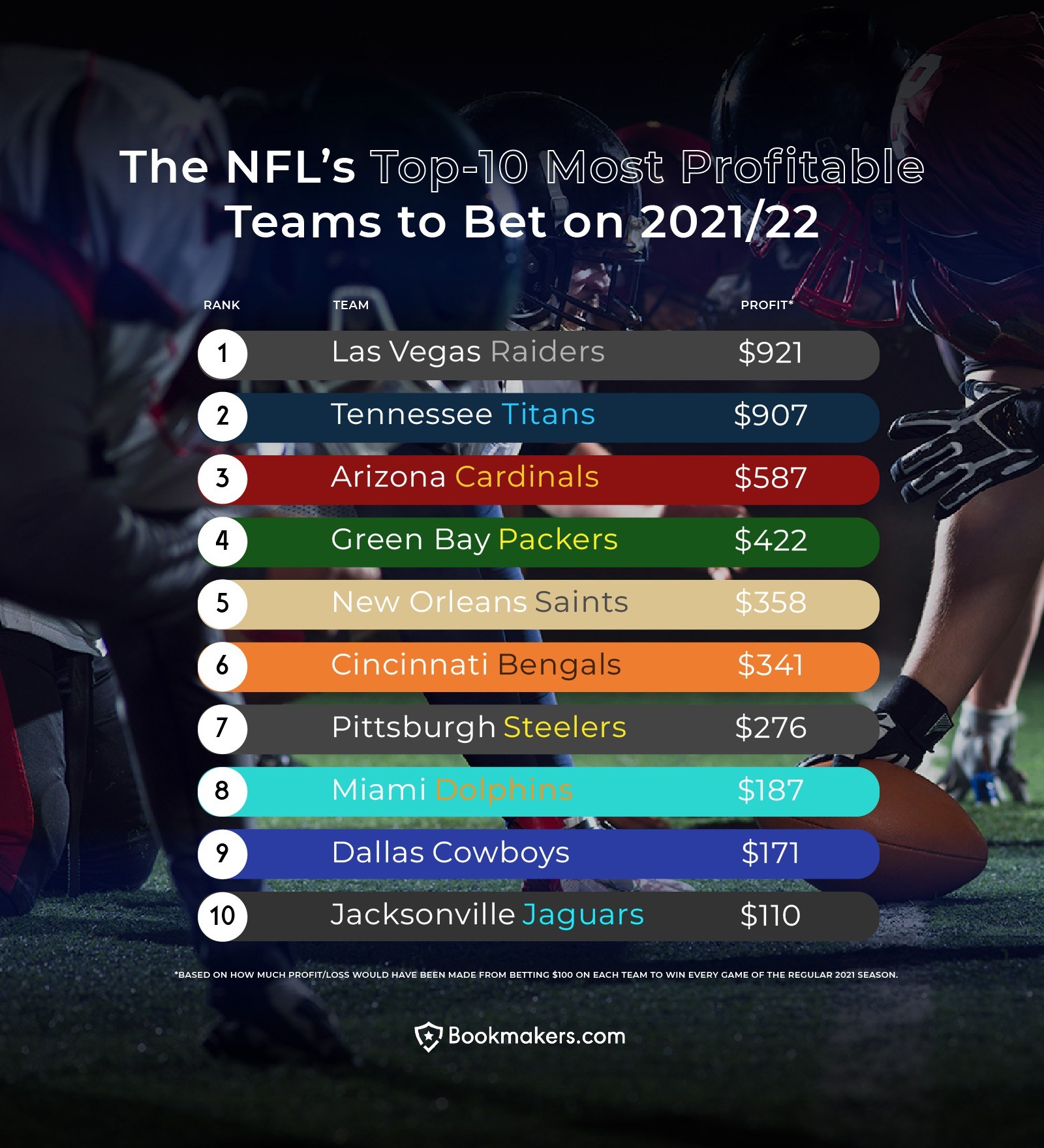 The Most Profitable Teams to Bet On

If you’d bet on each NFL team to win every game last season, the most profitable franchise would have been the Las Vegas Raiders. Based on a $100 bet per game, the Raiders returned winnings of $2,621 – which works out at a more-than-reasonable $921 profit.

This comes despite the franchise having a relatively indifferent season on the field, proving that betting on the most successful teams isn’t always the best way to make profit!

Close behind, we have the Tennessee Titans, the only other franchise to earn fans profits over $900. In fact, the next closest team, the Arizona Cardinals, would’ve only earned gamblers a comparably low $587 last season, based on a $100 bet each game.

The Green Bay Packers ($422) and New Orleans Saints ($358) round out the top five most profitable teams to bet on last season.

Interestingly, despite achieving championship success, the Los Angeles Rams can only rank 11th with a measly $53 profit, while Super Bowl runners-up, the Cincinnati Bengals, just miss out on a top-five spot with $341 profit. 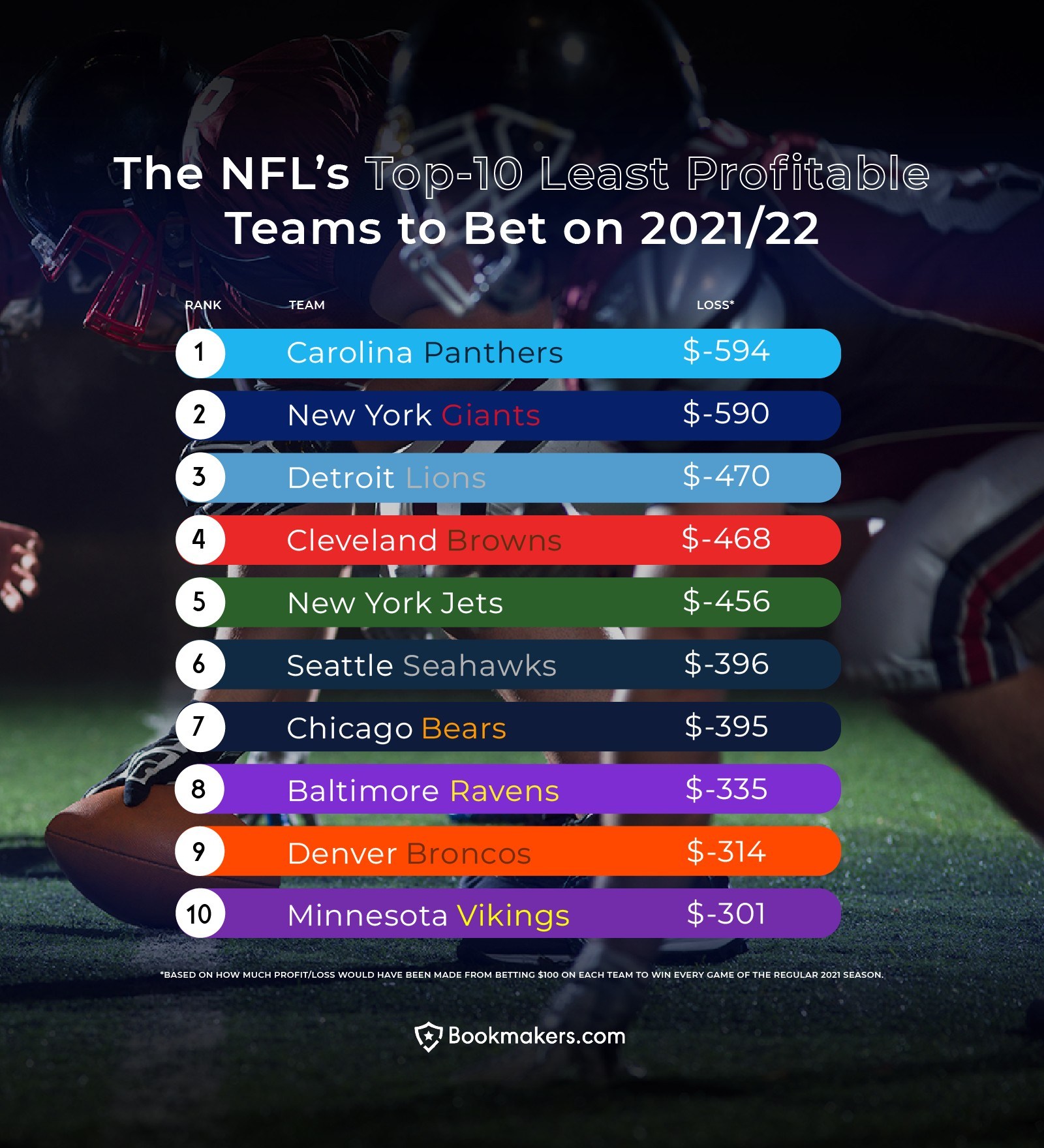 The Least Profitable Teams to Bet On

Looking at the other end of the table, which teams lost NFL fans the most money last season?

If you’d bet $100 on the Carolina Panthers to win every game during the 2021/22 NFL season, you’d have ended the year severely disappointed, and $594 down.

Not much better off, New York Giants and Detroit Lions fans would have lost $590 and $470, respectively, while, rounding out the five least profitable teams to bet on last season, we have the Cleveland Browns ($468) and New York Jets ($456).

Curiously, despite historic success and more Super Bowl appearances than any other NFL franchise, the New England Patriots also ranked among the least reliable teams to bet on. If you’d placed $100 bets on each Patriots game last season, you’d have lost a total of $114.

We’ve looked at the teams who were the best and worst to bet on last season, but which games saw fans earn the most profit? We’ve revealed the five most profitable home and away victories during the 2021/22 regular season. 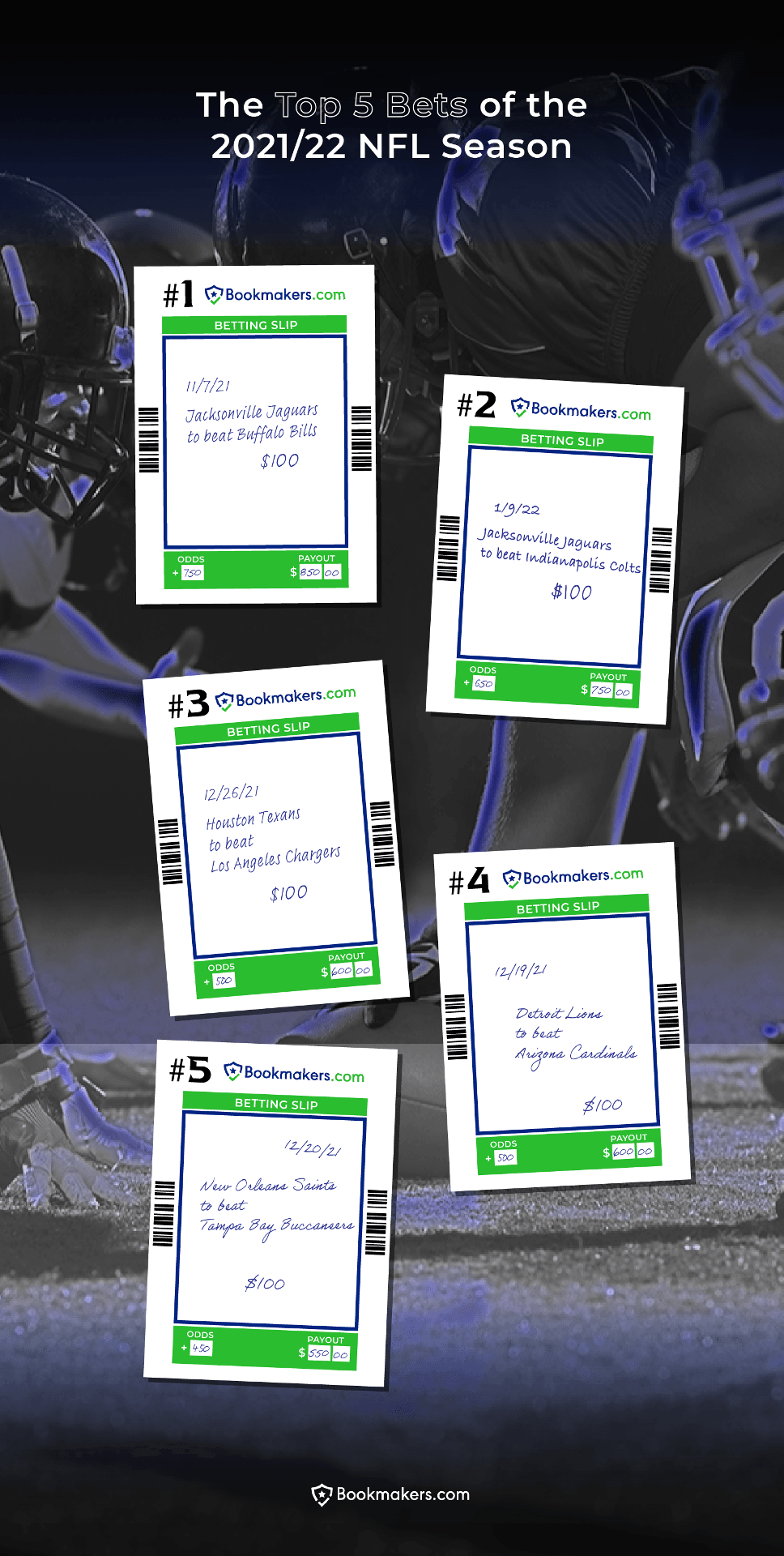 Games With The Greatest Home Profit

Looking at the most profitable NFL home matches last season, the Jacksonville Jaguars appear twice in the top five, claiming first and second place. The Jaguars’ victory against the Buffalo Bills in November came with odds of +850, while their win over the Indianapolis Colts in January had odds of +750.
Meanwhile, the Houston Texans’ 41-29 win against the Los Angeles Chargers on Boxing Day earned winnings at odds of +600, the same odds that accompanied the Detroit Lions’ December win versus the Arizona Cardinals.

Finally, the fifth most profitable home game last season came in the New York Jets’ victory over the Cincinnati Bengals in October, with odds of +525.

Games With The Greatest Away Profit

In terms of last season’s most profitable away games, none earned fans more than the New Orleans Saints’ 9-0 win against the Tampa Bay Buccaneers in December, a game that came with odds of +550.

Following closely, the Houston Texans’ November victory in Tennessee had odds of +475, while the Denver Broncos earned a win in Dallas and the Las Vegas won in Indianapolis with odds of +475 and +420, respectively. Rounding out the five most profitable away victories during the 2021/22 regular season, we have the Tennessee Titans’ November win against eventual Super Bowl champions, the Los Angeles Rams.

With the NFL draft completed for another year, teams will now be turning their attention to the new season, hoping to defy the odds and win the ultimate prize - and earn supporters extreme winnings! For all the latest in the world of NFL, check out the best NFL betting sites and betting offers.

Following analysis of historical odds and final score data for every game during the 2021/22 regular season, collected from Australia Sport Betting, we were able to calculate how much profit/loss would have been made from betting $100 on each team to win every game.

Learn How To Bet On The NFL with Bookmakers.com TV