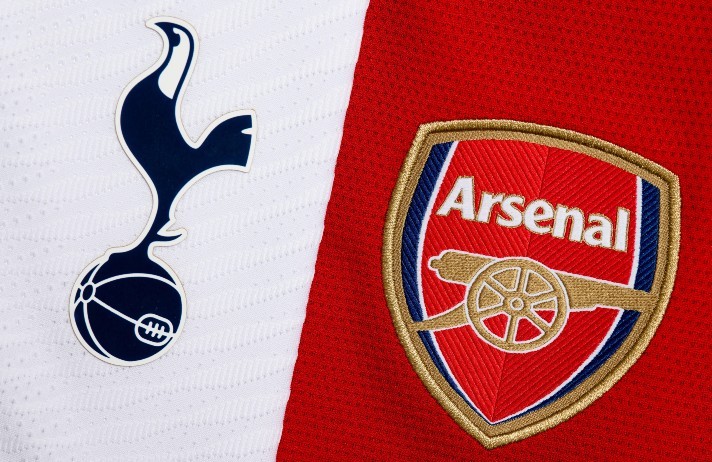 We have a title race still to be sorted out and a three-way relegation battle still raging, but there is no doubt that the biggest game online sports betting sites are focused on this week comes in the race for the Premier League’s fourth place.

Arsenal make the three-and-a-half mile journey to the Tottenham Hotspur Stadium on Thursday with a four point lead over their greatest rivals in the table, and they have a chance to seal their qualification for next season’s Champions League with a victory.

However, Spurs will know a win in the North London Derby will put them right on the heels of the Gunners, as there’ll be only a single point behind them with two games to go.  A look at Arsenal's stats shows they have won their last four games but when it comes to derbies, form often goes out the window.

It hasn’t always been this good for the teams from the north side of the capital though, as just last season Arsenal failed to qualify for any European competition for the first time since 1995 and Tottenham were forced to settle for the booby prize that is the Europa Conference League.

In fact, the 2016-17 season was the last time the Gunners appeared in the Champions League - something that would have been unthinkable in the Arsene Wenger era. Meanwhile, Tottenham have not been in Europe’s premier club competition in the last two seasons, although they did make the Champions League final in 2019.

Any @SpursOfficial fans fancy this on Monday night?

:arrows_clockwise:RT + Follow Us to win a pair of tickets!

Leadership Offers Hope For The Future

The Mikel Arteta project now seems to be bearing fruit at Arsenal, and the club deserve credit for sticking with the Spaniard after the side lost the opening three games of this season, which followed on from a disappointing eighth placed finish in the previous campaign.

Those losses to Brentford, Chelsea and Man City saw Arteta’s odds of the sack plummet on soccer betting sites, but the club’s hierarchy bravely held their ground and let their manager execute his plan to the point where they are now within touching distance of being back in European football’s promised land once more.

For their part, Tottenham have finally got things right in the manager’s office as well, after the failed reigns of Jose Mourinho and Nuno Espírito Santo.

Antonio Conte arrived at Spurs last November and has made the team a tough nut to crack, as Jurgen Klopp found out last weekend. However, he knows Champions League football is a must to continue Tottenham’s development and to do that a victory is key on Thursday.

All that has made this week’s derby one of the most important the two rivals will ever play, and one man who knows all about these games is Spurs icon Ledley King.

King, who played for Tottenham for his entire career, featured in numerous derby games in his 16 years as a player at the club and he is well aware of how this game impacts the lives of supporters.

“The North London Derby means a lot to me, I've been at the club since I was 14 years old,” King told Bookmakers.com.

“I'm used to, even at that young age, having friends that played for Arsenal and they were players that you wanted to get one over. That was always a big element around the game.

“Then when you get into the first team it becomes even more amplified. It's the first fixture you looked for on the schedule, you were always asking 'when are we playing Arsenal?'

“We knew how much that fixture means to fans especially, for them to be able to have bragging rights going into work on Monday is important. We know it impacts the entire week for the fans and that's what makes it so special for me.”

Everything Is On The Line In Thursday’s Derby

It’s ironic that this week’s derby takes place on a Thursday, as that’s exactly what both teams will be trying to avoid next season - playing on a Thursday in the Europa League.

Given the money both sides have spent upgrading their stadiums, both stages are fit for glamour ties on Tuesday and Wednesday nights. But, you have to earn the right to be there first and King feels Spurs have to beat Arsenal to keep their Champions League dreams alive.

“Tottenham will only be thinking about winning,” said the Spurs legend.

“This week's derby is up there as one of the biggest ever. Champions League football is obviously huge for both teams. For Tottenham, they have to win the game, close the gap and put the pressure on Arsenal.

“Arsenal know if they get the win, it gets them there. It makes this one a very special game, not just for the players, for fans too. This is what you are in football for.

“Tottenham will be disappointed if they can't win because it's a great opportunity to get three points and stop Arsenal from getting any points.

“There is no doubt Thursday's derby is going to be a huge spectacle and from a Tottenham point of view, they will want to keep the race alive.

“They'll be looking to get a result and put the pressure on Arsenal going into the last two games of the season, where anything can happen. It's one of the biggest derbies in recent memory, that's for sure.”

Home Comforts May Win Out

This game was originally supposed to take place on Sunday, January 16 and was called off due to injuries and Covid cases in the Arsenal squad.

It was a decision that enraged Tottenham at the time, as they felt the Gunners were playing up the seriousness of the situation and is an incident Spurs are supposedly still “seething” about to this day.

However, if they are looking for a smile, they only need to turn to their record in this fixture at the Tottenham Hotspur Stadium, as they’ve won every game against Arsenal since it opened in April 2019.  And according to Tottenham's league stats for this season, Spurs have scored more goals than the Gunners and conceded fewer.

When asked how he saw Thursday’s match playing out, King was quick to point to the location of the game being a big factor.

“When you study the two teams, how close they are in terms of quality, and then you look back over the history of the game in the last five or 10 years, you’ll find that there can be a slight home advantage when it comes to the results.

“If you had to, you'd just slightly favour the home team in the derby - especially since the new stadium opened, it's been a tough place for Arsenal to go and get a result.

“Arsenal have won four games in-a-row now and they'll be bouncing coming into this game though. Even when you don't play well, when you get over the line of winning games that breeds confidence.

“On the flip side, going to Anfield and getting a result there is only going to lift Tottenham's confidence too.

“The atmosphere that will be generated can help them to win this one, so hopefully the team can do that and the gap is down to one point. It will be all to play for then!

“Spurs have got to be at it. I've my fingers crossed, but I can only see Tottenham winning the game.”

Arsenal were a bit jittery in their 2-1 victory over a 10-man Leeds side on Sunday, and King reckons Antonio Conte and his management team will already have schemed ways to tackle the Gunners.

“Tottenham will have seen enough of Arsenal to know that there are vulnerabilities in that team,” King explained.

“Tottenham can use the atmosphere, and the intensity that they play at, to get at Arsenal - who are a relatively young group.

“However, it's more for me about Tottenham playing this game on the front foot and dominating the man they are on. Each man has to go out with the mentality to be dominant over his opponent.

“That's how you go and win the game, through your actions and your attitude. If enough of the players show up, then there is no reason why Tottenham can't win.”

No matter who takes home the bragging rights, the North London clubs are now back competing in the big time and the rest of the Premier League better take notice.

If you fancy Spurs to claim fourth place, you’ll find them at +220 with Ladbrokes. Elsewhere, Arsenal are available at -400 with Betfair to get the job done and box off fourth come the end of the season.