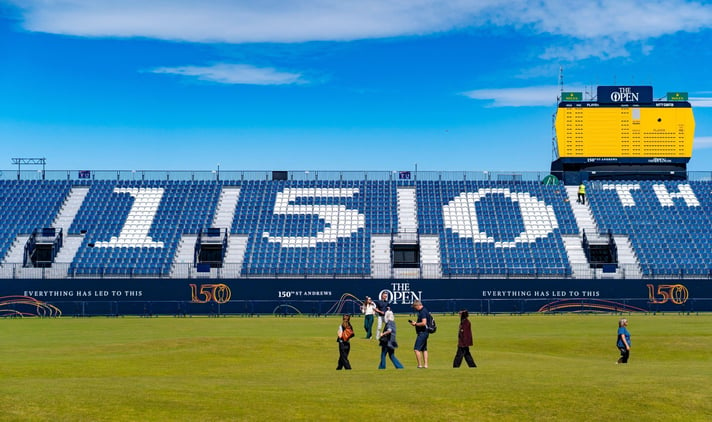 There are Open Championships, and then there are those at St. Andrews, that citadel of golf that has stood against the North Sea since 1552. The Royal & Ancient clubhouse, the Road Hole, the Loop, the Hell Bunker—the landmarks of the Old Course carry an almost mystical quality, never more so than when the world turns its eyes to this Scottish town for the 150th edition of the oldest golf tournament in the world.

That will be the case again on Thursday July 14, when St. Andrews hosts the Open Championship for the 30th time, and first since 2015. For golf fans, the setting makes the final major of 2022 a must-see event. For sports betting fans worldwide, it promises to offer four days of tremendous wagering activity, given that the Old Course among major championship venues is rivaled only by Augusta National in terms of fondness and familiarity.

So, get ready for some action, on and off the course. Among the field of 156 players, roughly a quarter earn berths through a handful of select qualifying tournaments on tours worldwide, among them the Scottish Open last week. Around 8% get in via local qualifying, while the rest of the field is exempt through world rankings, finishes in recent Opens and other majors or performance on certain pro tours or in select amateur events.

Odds for the Open Championship are set by golf betting sites based on which players they think are more likely to win. Favorites have shorter odds, but, in theory, they provide a better chance of earning you profit than those outsiders with long odds. But odds can differ depending on the online sports betting site, so always make sure you visit and sign up with multiple sites to ensure you have the best odds and offers possible.

Here are the top contenders in this year’s Open Championship, with their odds to win:

The Open Championship is an event with worldwide betting appeal, so expect sportsbooks to roll out lots of incentives in the form of new customer betting offers that can enhance your chances of winning or add to your bankroll. Typically unlocked by betting promo codes, offers can match a bettor’s deposit up to a certain amount, offer free bets or even provide odds boosts that amp up potential winnings.

Some promotions will offer bonuses that don’t even require a deposit. Open Championship odds boosts can provide much more favorable odds than you would typically find or offer more places when betting each way.

Golf is a favorite of bettors almost every week, given the sheer variety and volume of wagers available. During big events like the Open Championship, everything is magnified, and not just for the players on the course. Major championships like this week’s tournament at St. Andrews offer a far more expansive menu of betting options and betting offers than the week-to-week events on the PGA or DP World tours.

Foremost among those options is betting on one player to win. But in a field of 156 players, winning an “outright” wager is easier said than done, despite the tempting odds involved. Savvy golf bettors know to look a little bit deeper, given that major championships offer other types of bets that carry better chances of cashing out.

For the Open, bettors can wager on players to finish in the top five, top 10, top 20 or just to make or miss the cut following the second round. It’s best to look through all of these markets to see if there are some odds than take your fancy.

The Open will also see golf betting sites offer group betting options, in which you back a player to finish with the best score in a group of four or five players, either for the round or for the tournament. Other prop bets could include two- or three-ball options, where you pick a player to finish better than a chosen opponent or opponents.

Also be on the lookout for markets based on age (say, top finishing player over 50), country of origin (top finisher from Sweden or Ireland, for example) or amateur status. Bettors will also find fun prop bets such as whether the winner will come from the final group on Sunday, and whether there will be a playoff, which last happened at the Open in 2015.

There will also likely be props specific to the course: will there be a hole-in-one at the Old Course’s 175-yard par-3 eighth hole, any hole-in-one in the tournament or none at all? Will there be a double-eagle at “Long,” the monster 618-yard par-5 14th hole? Bettors usually find those types of wagers only at major championships, a fact which helps set events like the Open apart from the rest.

How to Bet on the 2022 Open Championship

While determining the type of bet you want to make can take some time and research, actually placing your wager is simple. Bookmakers.com scours the globe for the best legal and licensed USA sports betting sites and international betting sites, with all of them offering a plethora of markets on major events like the Open. Betting is as easy as checking out the various online sportsbooks, weighing offers and odds, then registering for an account and placing your bets.

Sports bettors will sometimes place futures bets, which can be put on months in advance of tournaments and provide more favorable odds, but there is no guarantee that the player you have bet on will actually play in the future tournament, so there can be more of a risk on these.

Once the Open begins, most golf betting online sites offer in-play odds, in which odds change based on the action on the course.

Previous Winners of the Open Championship

Where to begin with a tournament that traces its origins to 1860? Players from England and Scotland dominated the event’s first half-century, with an American not breaking through until Jock Hutchinson in 1921. Since then, some of the greatest ever have hoisted the Claret Jug—among them Tiger Woods, who blitzed the field in 2000 at St. Andrews, going a record 19 under and winning by eight shots.

There was Jack Nicklaus, earning his first victory on the Old Course in 1970, dramatically pulling off his sweater before teeing off on the final hole of a playoff in which he defeated Doug Sanders. There was Tom Watson, going birdie-for-birdie with the Bear in the “Duel in the Sun” at an unseasonably warm Turnberry in 1977, and claiming the title on the final hole. There was Seve Ballesteros, securing his second Open title with a final-hole birdie from 15 feet at St. Andrews in 1984.

But the gorse and the deep bunkers can also produce unlikely results. There was Paul Lawrie, winning in 1999 at Carnoustie when Jean van de Velde found the burn on No. 18—and tried to hit out of it, blowing a three-shot lead in the process. There was 1995 at St. Andrews, where John Daly overcame Costantino Rocca’s 60-foot putt to win in a playoff. There were back-to-back wins by little-known Americans Ben Curtis and Todd Hamilton in 2003 and 2004. Who knows what the Old Course has in store this time.

Where Can I Watch the Open Championship?

The Open Championship will also be broadcast on Sky Sports in the United Kingdom, Sky Sport DE in Germany, Sky Italia in Italy, Canal+ in France, SuperSport in South Africa, Sport 1 in the Netherlands, Sport TV in Portugal, TV Asahi and Abema TV in Japan, Fox Sports in Australia, Sky Sport in New Zealand, TSN in Canada and ESPN in Mexico.

The tournament’s official website, TheOpen.com, and its accompanying mobile app will offer live coverage to members of its One Club. While live streams not associated with broadcast partners can be hard to find for major golf events, check your favorite sports betting apps or streaming services to see what might be offered.

Frequently Asked Questions
Where is the Open Championship in 2022?

The 2022 Open Championship will be held at the Old Course in St. Andrews, Scotland, which is the most historic golf course in the world. It will mark the 30th time the event has returned to the seaside links layout, where most recent winners include Zach Johnson (in 2015), Louis Oosthuizen (in 2010), and Tiger Woods (in 2005 and 2000).

Is Tiger Woods Playing in the Open Championship?

Yes! Although we haven’t seen Tiger since he withdrew after the third round of the PGA Championship, he’s competing at St. Andrews after spending the past two months resting the leg he injured in a car crash last year. Woods has won two Opens on the Old Course, where he played a full practice round last week.

Are the LIV Tour Golfers Playing in the Open Championship?

Those who have qualified—a group that includes Johnson, Koepka, Abraham Ancer, Richard Bland, Sergio Garcia, Talor Gooch, Phil Mickelson and Ian Poulter, among others—are in the field at St. Andrews. Like the other majors, the Open is independently run (in this case by the Royal & Ancient) so any PGA Tour suspension do not apply.

How Can I Bet On the Open Championship?

Visit Bookmakers.com and check out the betting sites available. Given that odds can vary by bookmaker, examine several golf betting sites to find the most favorable odds for the wager you’re looking to make. If signing up for the first time, you’ll also receive bonuses like deposit matches or risk-free bets.

When Is the 2022 Open Championship?

The 2022 Open Championship is scheduled to begin with the opening round on Thursday July 14 through to the final round on Sunday July 17. In the event of a tie after regulation, a three-hole, aggregate-score playoff is employed. If there’s still a tie after that, the remaining players play off in sudden death.

How Much Does the Winner of the Open Championship Get?

Following the lead of the three other majors, the Open substantially increased its purse for 2022, raising it by 22% to $14 million. The winner will receive a record $2.5 million—and also the Claret Jug, which for golfers is priceless.

How Many Players Make the Cut at the Open Championship?

After the opening two rounds on Thursday and Friday, the field is cut down to the top 70 players and ties. Only those competitors will advance to the final two rounds. The cut line for last year’s tournament was one over, while the cut line in 2015, the most recent Open at St. Andrews, was even-par.

David Caraviello
@dcaraviello
8 Articles
David Caraviello is a veteran sports media professional with three decades of industry experience, most of it coming in the areas of golf, motorsports and college athletics. An 11-time attendee of The Masters, he has written about sports wagering since 2017.
Read Articles