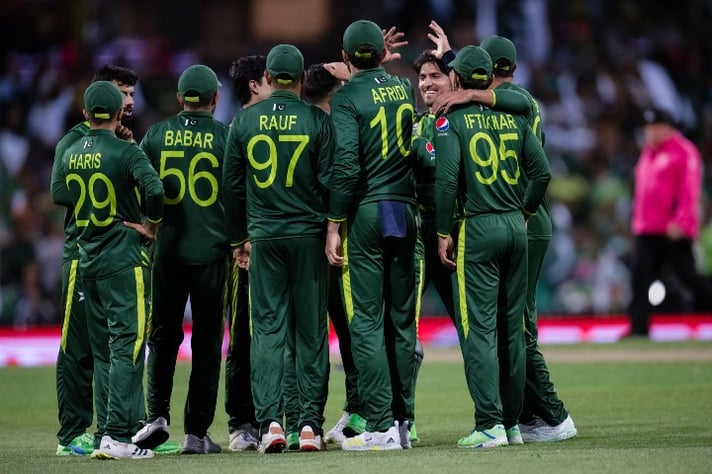 After seemingly being on the very cusp of elimination earlier in the tournament, the Pakistan men’s T20 team have made the World Cup final in Australia with a stunning display against New Zealand earlier today at the famous Sydney Cricket Ground. Pakistan will now face either England or India in Sunday's final in Melbourne, where Pakistan will be the underdogs with many of the leading cricket betting sites.

In what seemed like a home game, given the ferocity of the huge Pakistani crowd at the SCG, Pakistan were set a target of 153 to chase by the New Zealanders, who won the toss and decided to bat first. Pakistan rarely looked in any trouble as openers Babar Azam and Mohammad Rizwan fired half-centuries to completely wipe out any hope the Kiwis may have had of reaching the final in Melbourne on Sunday. A power-packed batting display backed up a big effort in the field, and a seven-wicket victory was secured with five balls to spare to a jubilant reception.

It might be a case of history repeating itself Down Under as Pakistan were previously victorious in the 1992 World Cup in Australia, a 50-over tournament. Pakistan recovered from a poor start to defeat England in the final led by enigmatic legend of the sport, Imran Khan.

This time, a shock result saved them from early elimination in the group stage when the Netherlands recorded a famous victory over South Africa to keep Pakistan's hopes alive after they had lost key games against India and Zimbabwe. Pakistan are now as short as 11/10 (+110) to land the T20 World Cup this weekend a week after their odds were 50/1.

All roads lead to a showdown with either pre-tournament favorites India or a repeat of that famous 1992 final against England, who are also likely to be favorites with the leading cricket betting apps should they progress by beating old rivals India tomorrow at the Adelaide Oval.

England had to dig deep themselves to make it to the semi-finals with hard-fought wins over New Zealand and Sri Lanka getting them over the line after a game with Australia was washed out. An embarrassing defeat to Ireland left them scratching their heads for form and points. India have been relatively unflappable in the T20 World Cup so far, handing defeats to Pakistan, Netherlands, Bangladesh and Zimbabwe with just a narrow defeat to South Africa the only negative.

Who’s next for Pakistan?

England and India now meet in Adelaide on Thursday to decide Pakistan’s opponents for Sunday's final at the Melbourne Cricket Ground. Indian betting sites will have India as favorites tomorrow, and England will need something special to defeat Rohit Sharma’s side. But with players like Ben Stokes and captain Jos Buttler in the ranks, it should be a very entertaining semi-final.

Pakistan can now re-group, take the extra day of rest and concentrate on one more big effort in Australia to achieve a T20 World Cup win. There could be a twist, though, with local weather reports for Melbourne looking decidedly poor. Rain is forecasted at 95% probability for Sunday and continuing into the potential reserve day of Monday, so fingers are crossed for some help from above and full match in store for whoever lines up in the 45th and final game of a wonderful T20 World Cup.