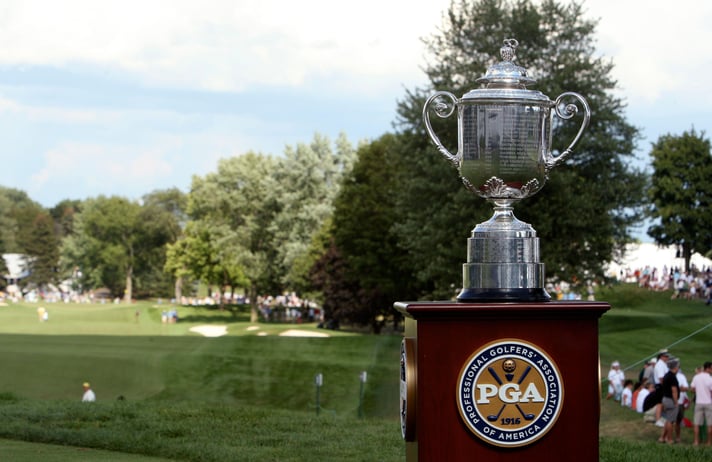 The PGA Championship is one of three major golf tournaments that take place in the United States of America. This event is now played every May, and it takes place on the weekend before Memorial Day, which makes it the season’s second major after the US Masters.

This major is unique by virtue of only being open to professional golfers, with the course changing on an annual basis. Southern Hills, Kiawah Island and TPC Harding Park are among the latest venues to stage this prestigious tournament, with this competition allowing golf betting sites to provide a wide range of markets.

After all, golf bettors will be interested in wagering on the winner of the tournament along with plenty of other outright markets. There is also the chance to place three-ball and two-ball bets along the way. The best golf betting sites will also have in-play betting available for each round of proceedings.

Since Australian Jason Day won the 2015 PGA Championship, the tournament has been won exclusively by American players. Justin Thomas and Brooks Koepka have both landed two victories in that time, with Phil Mickelson, Collin Morikawa and Jimmy Walker other US players who have tasted success.

Therefore, it’s clear that your first port of call should be to consider the American players near the top of the market on sports betting apps, and potentially further down. There is mileage in favoring the competitors who are going to be suited to the course conditions and whether they have played on this course before.

It’s also worth paying attention to the margin of victory, considering that it’s usually a slender one. 2022 winner Justin Thomas beat Will Zalatoris in a playoff, while the five victors before him were able to win by a two-shot margin. These winning margins show that it’s highly unusual to see someone win at a canter.

Unlike some of the other golf majors, there is an element of predictability when it comes to finding the winner of the PGA Championship. Ultimately, the past few years have seen a short-priced American player take home the prize, so you can start your search by looking for in-form players.

We’ve also seen a spate of US golfers finish runner-up, including Dustin Johnson, Tiger Woods and Patrick Reed. Therefore, you can often look to identify home-based players who are going to potentially perform well at a big price.

For those looking to wager on the winning margin on golf betting sites, you might want to look at this being a tight victory. As far as the winning score is concerned, this is rather dependent on conditions and the course itself. However, the 2022 and 2021 renewals saw -5 and -6 as the winning score, with birdies at a premium.

How to Back Winners on the PGA Championship Market

Firstly, you have the choice to bet on the outright market before the action starts or alternatively take a view when the competition is in-play. There will regularly be the opportunity to bet on the PGA Championship winner and even the possibility of waiting until the cut is made before making your bets.

There is also the chance to wager on the three-balls that comprise the first and second rounds of proceedings. This gives you more chance of backing a winner as you simply need your player to outperform his playing partners, although the outright market is going to give you the chance of landing a bigger return.

The best golf betting sites will offer a large number of places when it comes to betting the winner of the PGA, and that means you can profit even if your golfer finishes in fifth, sixth or seventh spot.