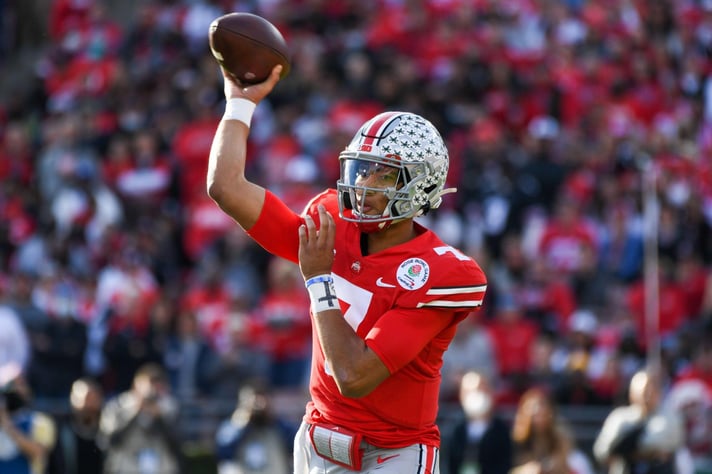 When you’re settling down to watch the College Football Playoff unfold, you’re likely going to be multitasking. First, you’re checking on how each game is going. Secondly, you’re keeping an eye on your wagers at the best college football betting sites to see if you’re going to be making a profit. And finally, you’re peering into the future at what some of these players might look like in the NFL.

Inevitably, a number of the players on show in the CFP will be first-round picks not only in the 2023 NFL draft but also later years. But it is 2023 that we are concerned with, and there could be as many as 10 players between the four teams of Georgia, Michigan, TCU and Ohio State picked in next year’s first round.

A lot can change between now and then, so we’re going to focus on the prospects that are more than likely going to be hearing their names called on Thursday night of the draft, starting with a defensive lineman who is among the top-five favorites to be the number one pick overall when looking at NFL betting sites.

Humans the size of Carter at 6’3” 300 pounds shouldn’t be able to move as quickly as he does. His lightning first step puts interior linemen on the back foot straight away and allows him to clog up running lanes as well as get after the quarterback.

He has a combined 15.5 tackles for loss and six sacks in the last two seasons as part of a suffocating Georgia defense that could be the difference between them and each of the other CFP contenders. He can be gotten at +800 with some NFL betting apps to be the No. 1 overall pick, and he’s in contention for that honor with our next prospect.

Coming into the season, there wasn’t a great deal of debate over the top two quarterbacks in this class, Bryce Young and C.J. Stroud. While both are still the two college football betting favorites to be the top pick, doubts have begun to creep in.

Stroud’s poise in the pocket in the face of pressure has been questioned, as has his ability to freelance plays that have broken down once his first read isn’t there anymore. His performances against top defenses Northwestern and Michigan has done little to dispel that. A big performance against Georgia could help boost his stock, even if Georgia are the popular college football picks for that matchup. Look for quarterback-needy teams like the Colts and Panthers to be very interested viewers in Stroud.

There will be a number of teams picking inside the top 15 of the draft who are in desperate need of offensive line help, and perhaps the Georgia-Ohio State matchup can also provide them with their answer. With such a strong defense, a good performance for Johnson against Georgia could solidify his top-10 chances.

At 6’6”, 310 pounds, the tackle moves incredibly easily, and while he has only been the left tackle for one season, he has allowed just one sack this season. Teams as high up in the draft as the Bears could use offensive line help, but it is more likely that teams such as the Cardinals or Steelers are most interested in Johnson.

Deciding which wide receiver will be selected first when making your draft wagers at US betting apps will be a pretty difficult task, given the receiving depth in the class, even if the 2024 and 25 classes could be more loaded. However, TCU’s Quentin Johnson has the physical traits that teams look for in a No. 1 wideout, so he has a good chance.

He is 6’4” and 215, and he can go up in the air to compete for jump balls. If he can put on a show against Michigan, there is every chance he will be the first receiver called. Teams drafting in the early teens, which at present could be the likes of the Jaguars or Patriots, could be very interested in Johnson’s showing on the national stage.