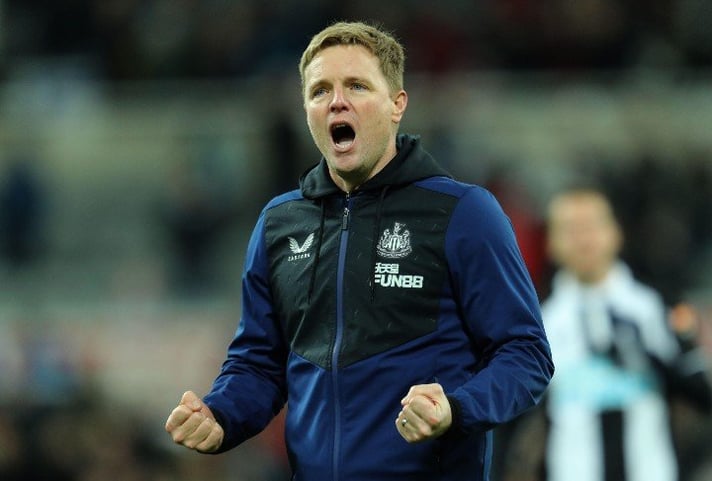 If you’re looking for an alternative Premier League betting market, then the Premier League top six market provides customers with the chance to bet on a team to finish higher than seventh when it comes to the final overall standings.

The beauty of this market is that six teams will be settled as a winner and it’s also an opportunity to bet on a club who might not realistically be able to secure a top four place in the top flight but are certainly in with a stronger chance when it comes to landing fifth or sixth spot.

You won’t find a competitive price on the Premier League title favorites such as Manchester City and Liverpool to finish in the top six. In fact, some soccer betting apps didn’t have prices available on these two teams before the season started, they were that likely.

Here are the latest Premier League Top 6 odds, from some of the best sports betting sites:

Before the season started, few would have expected Newcastle United to be one of the teams occupying a place in the top six. Not only are they comfortably in that group, they are actually third after the first round of games following the World Cup. Right now, the manager of the year award would be headed to the north east, even if Arsenal's Mikel Arteta has something to say about that.

Newcastle were staring relegation in the face when the club decided to sack Steve Bruce and replace him with Bournemouth's Eddie Howe in November 2021. It was a bold decision, but one that has worked out brilliantly for both parties. Howe's reputation has gone through the roof while Newcastle fans are daring to dream. They are dreaming big. They are dreaming of winning the Premier League before going on to conquer Europe.

The January transfer window will be crucial for Howe and the club to do the right business. Being in the title race will be an attractive proposition for plenty of players looking for a move to the Premier League with the prospect of also featuring in the Champions League. Since their takeover by a consortium of the Saudi Public Investment Fund, the Magpies are one of the wealthiest clubs in Europe.

They can afford to sign the biggest of stars, but they also have to be careful not to ruin the harmony within the changing room that has seen them challenge the top clubs in the league. Newcastle have been used to looking down the table in recent seasons, but they are now looking up. With a nine-point advantage over seventh-placed Brighton, anything less than a top six finish this season will be seen as a failure in the north east.

Can Any Team Break the Premier League Big Six?

Despite a fairly abject 2021-22 season, Manchester United were still able to land sixth spot with a total of 58 points. One would imagine that the Red Devils will kick on with Erik ten Hag and that is reflected in the Premier League top six betting odds of 1/2, which were available prior to the start of the season.

Arsenal were available at similar odds to secure a top six finish and it’s clear that both of the above clubs are aiming to land a top four spot. The Gunners were only two points outside the Champions League spots last term and both United and Arsenal have a high implied probability percentage based on preseason betting odds.

However, there were a number of other teams with single figure odds on this market and there could be a sea change in the form of Newcastle. The Magpies have been able to recruit several quality players over the past twelve months and odds of 5/2 on this market implied they came into the season with a strong chance.

Two seasons ago, Leicester City and West Ham were both able to record top six finishes and the latter were available at pre-season top six odds of 4/1 to upset the favorites once again. The Foxes were available at slightly bigger prices, having been under pressure to comply with Financial Fair Play.

Aston Villa were sandwiched between these clubs in the Top Six betting and Steven Gerrard will be aiming for a top half finish as a bare minimum this season. Brighton were the only other team at single figure odds although the Seagulls have struggled to keep hold of their best players.

Manchester City, Liverpool, Chelsea, Tottenham, Arsenal and Manchester United were the top six in the 2021-22 season, although Leicester and West Ham were able to finish above Spurs and the Gunners twelve months previously.

Leicester also landed fifth spot in 2020-21 during a season where Arsenal finished in a lowly eighth, although the 2018-19 season saw the original Big Six dominate the landscape and the same applies to the 2017-18 and 2016-17 campaigns.

Consider Cash Out on the Premier League Top Six Betting

While six teams will be settled as winners on the Premier League top six betting market, it doesn’t mean that you can’t make a profit in a different way. For example, you could back a Leicester, West Ham or Newcastle at a decent price and then look at potentially cashing out your bet further down the line. Cash out is available at most of the best sports betting sites, so this option should be available.

This is known as a back to lay strategy and the alternative is that you can include a Premier League top six selection as part of a season-long multiple bet. This is something that is done with the shorter-priced picks which are combined with other favorites in different betting markets in order to land a bigger price.