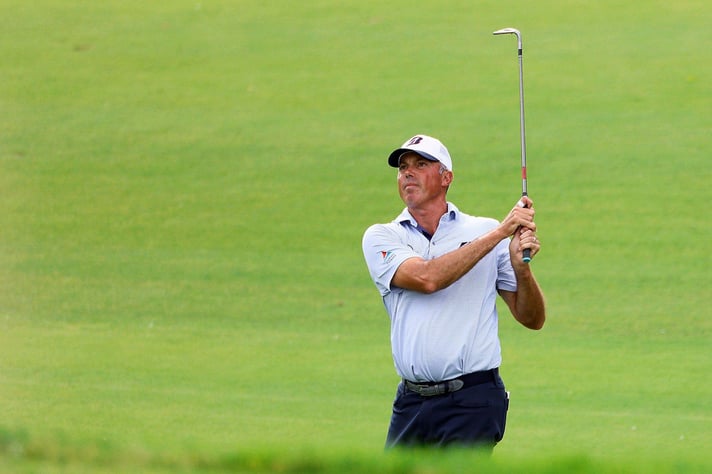 For the 22nd consecutive year, many of golf’s top names converge on the Tiburon Golf Club in Naples, Fla., for the unique three-day team event known as the QBE Shootout. Featuring rounds consisting of a scramble, alternate shot and four-ball (more on all that later), the tournament features 12 two-player teams—and is one of the rare pro golf events in which men and women compete at the same time.

Indeed, LPGA stars Nelly Korda (playing with Denny McCarthy) and Lexi Thompson (playing with Maverick McNealy) are among those entered. While the team of Jason Day and Billy Horschel is the favorite on golf betting sites to win at +450 (9/2), the pairing of Harris English and Matt Kuchar have won the event three times previously, most recently in 2020, and carry +600 (6/1) odds of adding a fourth title to their collection.

The teams play a better-ball scramble in the first round Friday where both players hit and choose the better of the two shots. On Saturday they play a modified alternate shot in which each player hits a drive, and the player whose drive is not selected hits the second shot. Sunday is four-ball, in which each player plays their own ball for the duration of the hole, and the team takes the lower of the two scores. It’s very much a tournament in the style of a country club member-member, except for the $3.8 million purse, $950,000 of which goes to the winning team.

Last year’s winners, Jason Kokrak and Kevin Na, are not in the field, both having defected to LIV Golf. The highest-rated players this year are the women, given that Korda is No. 2 in the world and Thompson No. 7. Max Homa (teamed with Kevin Kisner) is the highest-ranked player among the men at No. 16, followed by No. 17 Cameron Young (playing with Steve Stricker) and Horschel at No. 18.

Greg Norman was the longtime host of this event until he went off to run LIV Golf and became persona non grata in American tour circles. But his mark remains left on the tournament in the form of Tiburon Golf Club, which features a pair of courses—the Black and the Gold—which were designed by the Shark himself. The 7,382-yard, par-72 Gold Course, which opened in 1998, has been the host of the QBE Shootout since 2001.

The Gold Course can certainly look menacing, with its stacked sod-wall bunkers and coquina waste areas brimming with thick pampas grass. There’s also an immense amount of water, as you can imagine for Southwest Florida, with water hazards in play on every hole except for one. The signature hole is the par-3 fifth, which plays over a lake to a green with bunkers on either side, a waste area in front and water behind. The par-4 18th is reminiscent of Hilton Head with its generous landing area and green protected by water and bunkers.

But don’t let the features fool you—teams are going to go very, very low in an event that largely allows bad shots to be discarded. Kokrak and Na last year opened with a 59, and closed with a 60. Day and Marc Leishman last year opened with a ridiculous 56. The course and the format are designed to put on a show, and anyone in the field is capable of taking advantage. That includes Korda and Thompson, who play the same layout each year on an LPGA Tour stop.

With just 12 teams and 24 players, it’s pretty easy to drill down on just about everyone in the field before wagering money for real on sports betting apps. Horschel finished second last year playing with Sam Burns, while Day was fourth with Leishman. Horschel opened this wraparound season with a T7 at the CJ Cup and was T13 last week in the 20-player Hero World Challenge in the Bahamas. Day missed the cut in his most recent start in Sea Island, though he was T11 at the CJ Cup and T8 the tournament prior at TPC Summerlin.

English spent five months on the shelf earlier this year due to hip surgery, and he’s struggled for most of this season other than a T9 at the Fortinet Championship in September. Kuchar also missed the cut at Sea Island and hasn’t had a top-10 since Hilton Head in April. Tied with English and Kuchar for No. 2 odds choice is the team of Brian Harman and Sepp Straka. Harman is the current world No. 23 who’s finished second in his last two tournaments, while the latter of the duo finished T10 at the Hero after missing the cut in three straight.

The team of Homa and Kisner enters with +700 (7/1) odds; Homa won the Fortinet in his best start of the season, while Kisner is coming off a T29 at Sea Island and a 19th (out of 20) at the Hero. Young shot three rounds in the 60s last week to finish solo third at the Hero, but betting sites have priced up he and Stricker at odds of +1100 (11/1), which is likely because his partner comes from the Champions Tour. One interesting duo is +750 (15/2) Corey Conners and K.H. Lee, who were teammates for the International side at the Presidents Cup. Lee was also third in October amid a stacked field at the CJ Cup.

And don’t discount the LPGA stars here. Thompson has finished as high as fourth in this event, while McNealy has twice posted top-10 results this fall. They also bring the potential for fantastic value on betting apps at +275 (11/4) for a top-five finish. Same for the unflappable Korda, who is as savvy as it gets on the course, and is paired with one of the game’s better putters in McCarthy. They’re +260 (13/5) to snag a top-five finish on USA sports betting sites.

Harris English and Matt Kuchar to Win, +600 (6/1): Yes, English is coming off an injury and a long layoff. Indeed, Kuchar hasn’t had a good finish in months. But together, they’re magic in this event, with three championships and two runner-up finishes. The nature of the format mitigates individual bad shots, and clearly these two bring out the best in one another.

Max Homa and Kevin Kisner Top 5, -120 (5/6): Another pairing that knows each other well, given that they tied for fifth in the tournament last year, and were also teammates on the United States squad in the Presidents Cup. Homa is a rising star on the PGA Tour, Kisner is a prototypical grinder, and both have strengths that complement the other.

Nelly Korda and Denny McCarthy Top 5, +260 (13/5):  Maybe we’re chasing value here, or maybe we’re too enamored of Korda’s smooth, effortless swing. The women will play from the same tees as the men in this event, so the pressure will be on McCarthy with the driver. But from approach shots in, Korda is as good as anyone in the world.

How to Watch the QBE Shootout