Sorry Jurgen, Tottenham Can Play How They Please Given The Stakes 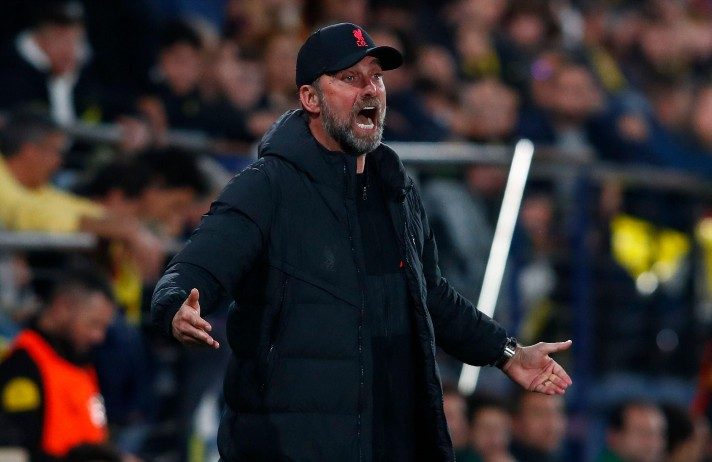 There is no point in shying away from it, Liverpool manager Jurgen Klopp was not happy with the challenge that Tottenham presented to them last Saturday night at Anfield and you can understand why he was frustrated.

The Reds have seen their odds of winning the Premier League title drift out significantly on online sports betting sites after Spurs stood firm to claim a 1-1 draw. It was also a result that also seriously dented their hopes of claiming an unprecedented quadruple of trophies this season.

But, it was how Spurs got the job done that seemed to irk Klopp the most, as Antonio Conte’s side favoured being defensively solid over padding their possession stats.

The plan almost worked a treat as Son Heung-min finished off a beautiful flowing move in the 56th minute to give Spurs the lead, but a deflected effort from Luis Díaz drew the home side level 18 minutes later.

In fact, as Liverpool pushed for a winner to keep their title dreams on track, it was Tottenham who actually came the closest to winning the game as Pierre-Emile Højbjerg stuffed up a glorious headed chance in the dying seconds.

The stalemate left Liverpool three points (with an inferior goal difference) behind Manchester City in the table once the weekend’s games concluded, making the Citizens massive favourites on soccer betting sites to be crowned Premier League champions for the fourth time in five seasons.

Instead of being disappointed with the result at the press conference after the game, Klopp chose to take out his irritation on the tactics his opposite number employed on Saturday night.

“I don't like this kind of football,” said Klopp. “I think they are world class and I think they should do more for the game.

“It's a game against Liverpool, they have 36 per cent possession. But that is my problem. I cannot coach it.”

According to Tottenham's stats, that possession total is 15 per cent lower than their average for the season.

Any @SpursOfficial fans fancy this on Monday night?

:arrows_clockwise:RT + Follow Us to win a pair of tickets!

Spurs Have Their Own Fight To Win

However, while you can acknowledge the sincerity in Klopp’s beliefs, we have reached the point of the season where it is all about substance and not style for teams.

Tottenham have their own battle for the fourth and final Champions League spot the Premier League has on offer to worry about and they knew they had to get a result on Saturday to keep their dreams afloat - especially given the sheer scale of the challenge that faced them away to Liverpool.

Conte’s ploy worked a treat as they walked away from Anfield with a rare and precious point, becoming the first team since Brighton back in October 2021 to take points off the Reds at home.

1-1 - Tottenham are the first side to stop Liverpool from winning at Anfield in the Premier League since Brighton in October 2021 (2-2). Indeed, Liverpool had won 12 successive home league games before today. Contest. pic.twitter.com/bWUI7UqMfU

That draw has now given Spurs momentum as the head into one of the biggest North London derbies in recent memory on Thursday, as Arsenal arrive at the Tottenham Hotspur Stadium four points ahead of their hosts with only three games to go.

Losing last Saturday was not option Antonio Conte was willing to consider and, despite Klopp’s protests, he got the job down the best way he knows how. Even if you don’t like how they get it, results really are all that matters at this time of the season.

One man who enjoyed the away side’s performance, was Tottenham legend Ledley King. Having manned the post at centre back for the club for his entire career, you can take it as a given that he enjoyed the defensive display. But, he was also quick to point to the danger Spurs possess going forward too.

“I thought it was a really good performance,” King told Bookmakers.com when asked about the game.

“Tottenham are a team who have certainly shown that they are ready to fight to try to get every point available, especially at a very tough place to go.

“We know how difficult it is to go to Anfield and believe you are going to get a result. But, Tottenham defended solidly to a man. They were also a threat on the counter attack.

“When you travel to places like Anfield or the Etihad Stadium, you know you are going to have to defend very well. But, it's all about what you do when you have the ball.

“I felt that Tottenham found a nice balance of being a threat when they went forward too.”

Tottenham Break Better Than Most

It didn’t take long for our conversation with King to get to Klopp’s views and the Tottenham icon was quick to praise his former side for shutting down the German’s key men.

“The comments from Jurgen Klopp after the game were out of frustration because his team struggled to create any real chances,” said the Spurs icon.

“Liverpool kind of ran out of ideas on how to get through the Tottenham defence. Each and every Spurs player, especially the three centre halves, was spot on defensively.

“They seemed to keep (Mohamed) Salah and (Sadio) Mané very quiet, and that's a testament to how Tottenham defended. Klopp's comments didn't surprise me as Liverpool - like Tottenham - are fighting for every inch and every point that they can get.

“I suppose Klopp was just a bit frustrated that Liverpool were unable to really open up and create the chances they would have like.”

Spurs are undefeated against the top two in the Premier League this season, scoring wins home and away over City and securing a pair of draws with Liverpool. When asked how Tottenham had pulled off the feat, King pointed to work going on at the club over the past few years.

“Tottenham are one of the very best counter attack teams in football,” King exclaimed.

“Last season I was part of the coaching staff, I was able to work with the players and it was a big part of the game plan then.

“When you have players of the calibre of Harry Kane - who can hold the ball up, turn and pass so well - and guys like Son (Heung-min) or Lucas (Moura) or (Steven) Bergwijn running off the ball, it was a big feature of our play, and it is still there now.

“That why, when teams have more of the possession against Tottenham, they always have to be very wary of the threat Spurs hold once possession is lost. The personnel they have just makes them very dangerous on the counter.”

As Tottenham face a huge derby game on Thursday, it must be remembered that they would have dreamed of being in this position back in November as Nuno Espírito Santo was sacked on the back of four losses in six games as the club languished in eighth place with just 15 points.

In the 25 matches since, new boss Antonio Conte's side has won 47 points – averaging very close to two points a game.

Having won titles in Italy and England, the Spurs board knew what to expect from the ultra-demanding Italian and his influence now seems to have rubbed off on the players, according to King.

“Antonio Conte is a born winner. He was won things at the highest level,” said King.

“He was a winner as a player and a winner as a manager. He is similar to Jose (Mourinho), who came in being used to winning things.

“That was his mentality as well, and he tried to get that winning mentality across to the players of having to compete and fight for everything. He wanted them to have a never give up, never-say-die attitude and Conte is the same.

“I know for a fact that Conte does everything with passion and he wants to win. I believe the players are buying into that and since he has come in, he has turned the team around.

“Tottenham were a team where you were not sure where they were going, and they are now a team that are starting to believe that they can finish in the top four. Conte has managed to do all that in a short space of time.

“There are still games to be played and I'm sure they are going to fight for every point they can get between now and the end of the season.”

If you believe Tottenham can win that fight for a top four spot, you can back them at +220 with Ladbrokes.