The World's Most Trolled Referees 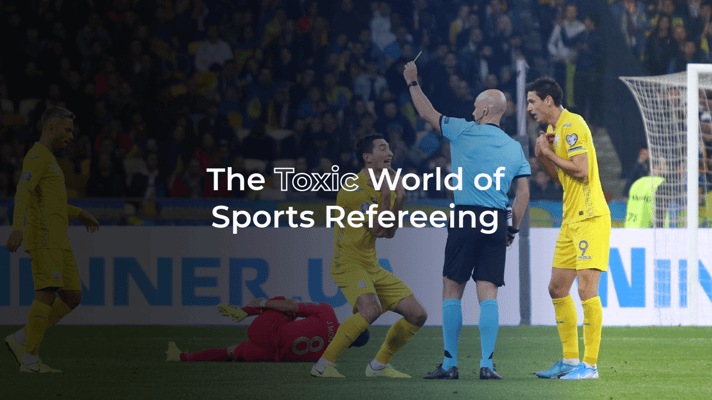 No matter the sport you follow, there will always be tension and frustration around decisions made by the on-field officials; look no further than the regular controversy endured in the Premier League and the recent chaos in the Africa Cup of Nations. Often, however, this quickly turns into social media abuse.

Using social listening tool Linkfluence, we’ve been able to determine which referees around the world suffered the most online abuse from sports fans last year. Find out which officials make the top 20

Which Referees Cop The Most Abuse?

Have you ever wondered who the most hated officials are in world sport? Well, look no further; we’ve highlighted the five referees that took the most abuse online last year! 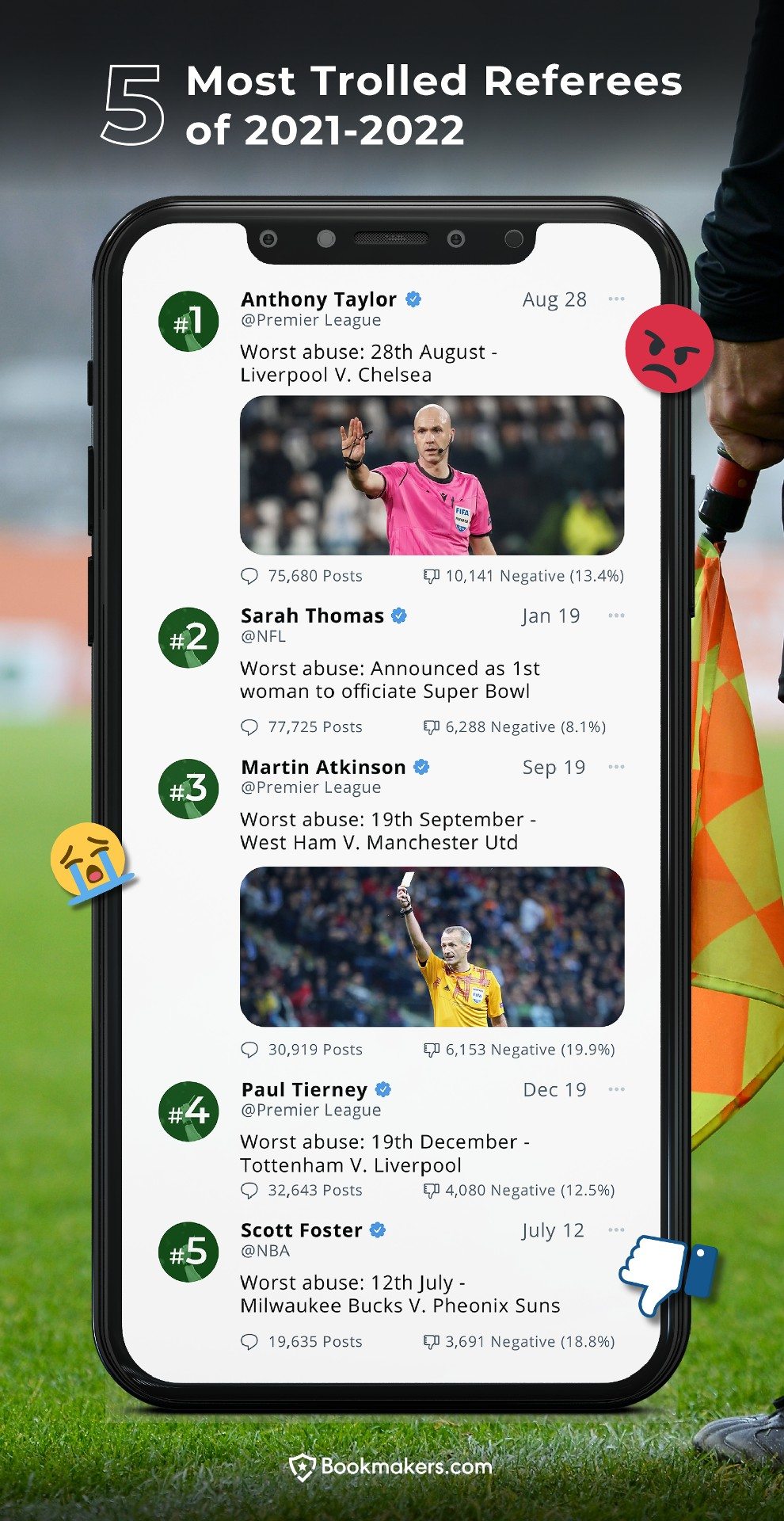 According to our research, the Premier League’s Anthony Taylor is the world’s most abused referee. Over the last 12 months, soccer fans have targeted him with an astonishing 10,141 negative posts, with a large chunk of those (3,000+) coming in August after he controversially gave Chelsea’s Reece James a first-half red card against Liverpool – the first of four he’s already given this season*.

Rising through the ranks in a male-dominated world, American football referee Sarah Thomas earned a place in the history books last year as the first female to officiate a Super Bowl. However, not all NFL fans shared in the celebration, with a significant portion of the 6,288 abusive messages she received last year coming after the announcement.

Despite having spent nearly 20 years in the middle, Martin Atkinson still sparks controversy among soccer fans, with 6,153 hateful social media posts sent his way last year alone. Incredibly, two third of those (4,000+) came after Manchester United’s trip to West Ham in September, after Atkinson awarded the hosts a contentious penalty in the closing moments of the game.

Placing fourth overall, Paul Tierney is the third Premier League referee to feature in the top five most abused officials, receiving 4,080 malicious messages in 2021. Of those, an incredible three quarters (3,100+) came after December’s hotly contested affair between Tottenham Hotspur and Liverpool, with both sets of supporters taking their grumblings from the game to social media.

Scott Foster has officiated the NBA for 25 years, unfortunately experiencing plenty of abuse along the way. And 2021 was no different; receiving 3,691 negative social media posts last year, including an onslaught after the Milwaukee Bucks bettered the Phoenix Suns in July, he places within the top five most abused officials over the last 12 months. 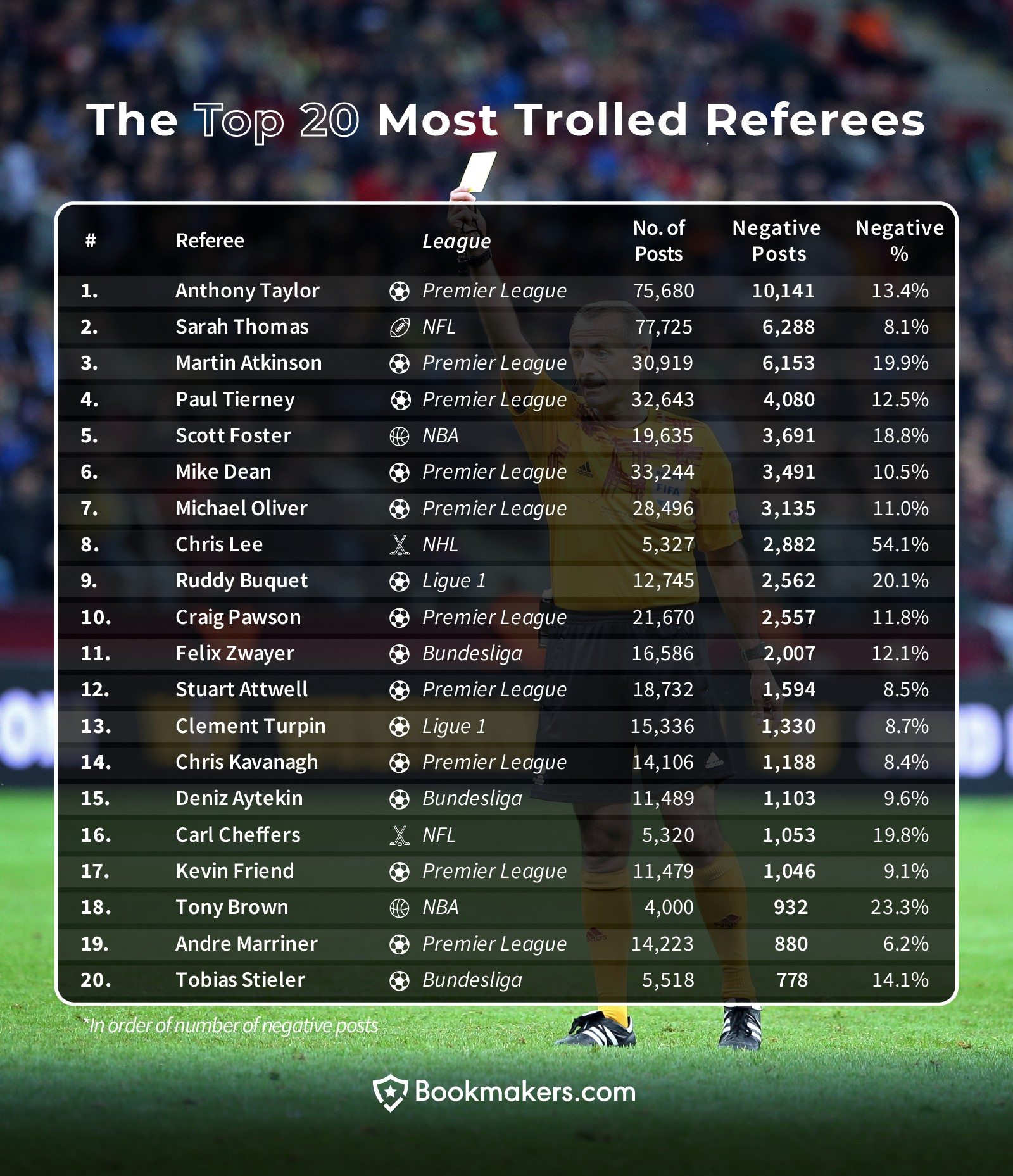 The Top 20 Most Abused Officials In World Sport

Analysing social media data from the last 12 months, we’ve created the definitive list of the top 20 most abused officials around the world – and determined where the most hate is coming from!

The Premier League Is The World’s Most Toxic League

With 10 of the 20 most abused officials hailing from the Premier League, the top tier of English soccer is the world’s hub of vitriol and toxicity. However, fans will feel criticism is justified, with stadium sentiment around the standard of Premier League officiating plummeting year-on-year.

Of the remaining referees to make the list, a further five also officiate top-level soccer in Europe, with Ruddy Buquet (2,562) and Clement Turpin (1,330) plying their trade in France’s Ligue 1 and Felix Zwayer (2,007), Deniz Aytekin (1,103), and Tobias Stieler (778) based in the Bundesliga.

Meanwhile, the remaining refs officiate US sport, across the NFL, NBA, and NHL; joining Thomas and Foster among the top 20, we also have hockey's Chris Lee (2,882) – who suffered the highest rate of negative posts of all listed (54.1%) - American soccer's Carl Cheffers (1,053), and basketball’s Tony Brown (932).

To determine the most abused referees in world sport, we conducted social listening using Linkfluence. Social media activity relating to over 600 officials (from each major sporting league around the globe) was analysed, to reveal who received the most online abuse and negative posts between January 2021 – January 2022. Any words, phrases, hashtags, and emojis that are known to be abusive were highlighted as negative sentiment.

With social media now such an important part of the supporter experience, it’s only natural to want to share opinions with likeminded fans after an engaging or controversial match - but it’s important to remember that maliciousness and abuse can be considered a criminal offense. Discover the latest in the world of sports betting, or find amazing odds and tips for your team.