Three Players Who Can Change The Fortunes of Manchester United 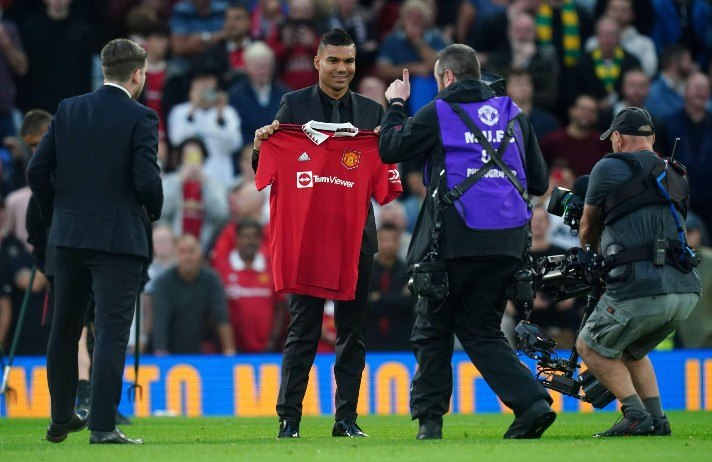 Last night's 2-1 win against Liverpool at Old Trafford might just be the result to kick-start Manchester United's season. United may only have had 30% possession in the game which will lower their season average on our Manchester United stats page, but getting the three points was all that mattered.

Despite the win, United fans know how important the remaining nine days of the transfer window will be for Erik ten Hag to strengthen his squad further.

It has taken two demoralizing and shambolic results and performances to make senior management executives at Old Trafford to act and bring in the required players that are absolutely needed to make this a successful campaign.

Here are three players that Bookmakers' believe will bolster Manchester United’s chances should they get the Dest and Antony deals over the line before they travel to Southampton on Saturday in a game that most of the leading betting sites are making United favorites for.

Casemiro was presented to the crowd at Old Trafford prior to Monday night's win against Liverpool. The Red Devils have acted swiftly in securing an out-and-out defensive midfielder since their interest was known last week. It has been obvious for the past two seasons that the Red Devils were in desperate need of a player with the Brazilian’s profile, let alone when two senior central midfielders left the club in Nemanja Matic and Paul Pogba.

Why Manchester United have decided to leave it so late, once again, to conclude their business in the middle of the park, beggars belief. Casemiro is a fantastic signing on the face of it for ten Hag, and a plug for a much-needed leak in Man United’s team going forward. The 30-year-old Brazil international, has formed a partnership with Fred for the national team, where both players thrive together, and the club will hope the same can ensue at Old Trafford.

The potential negative element to this transfer is the cost. Real Madrid have secured a sum of £60 million, which is further dampened by wages of more than £350,000 per week. A four-year deal for a 30-year-old, is certainly a risk.

Unfortunately, Manchester United simply have to take it and they won't be spending that amount of money on a player to sit on the bench, so we can expect to see Casemiro claim his position in United's Premier League starting lineups sooner rather than later.

Casemiro has proven himself to be one of the best in his position over a number of seasons and is a true out-and-out defensive midfielder. As ten Hag said, he will act as the cement between the rocks in the club's quest to secure a top four finish.

With the impending loan or sale of Aaron Wan-Bissaka, the Dutch manager is in the market for a right back who can more than challenge Diogo Dalot in the starting lineup.

It was clear from pre-season that ten Hag did not fancy the English right back, who was not attacking enough to proficiently feature in his system. While Dalot has shown, at times, he can step up to the plate and showcase a high level, the Portugal international most definitely needs high level competition.

Barcelona's Sergino Dest has come onto the market by the Catalan club this summer at a price of around £15 million. A snip of a fee for a club like Manchester United that should be a very comfortable deal to complete on all fronts.

Ten Hag, of course, knows the American international from his time at Ajax, so he will know his qualities and what he could bring to this United side. Dalot needs regular competition in the same way that Tyrell Malacia will either push Luke Shaw on, or out of the team.

Dest, at 21, still has a long way to go to reach the elite, but ten Hag will know how to get the very best out of his former player and accelerate his level over the next few years as he heads into his prime.

While the deal has been on-off all summer long, Manchester United remain persistent in trying to secure the services of Antony. The dazzling Brazil international possesses something that the club do not currently have in their ranks, a left-footed right winger. United have an abundance of players who can play off the left with a right foot, and so it's important to bring in a similar player on the other side.

Ajax have played hardball with the Old Trafford club once before this summer over Lisandro Martinez, and the Dutch club has the appetite to once again, hold out for their valuation of the winger. That valuation is believed to be £70 million, which is an amount that Ajax thought would price the Red Devils out of any deal. However, ten Hag is not giving up and wants to sign the forward as an absolute priority.

There are discussions behind closed doors that signing Antony will open the doors for Cristiano Ronaldo to leave before the transfer window shuts at 11pm on Thursday, September 1. After being named on the bench against Liverpool, it is highly unlikely that Ronaldo will stay at Old Trafford as a bit-part player under Ten Hag, who has clearly made his mind up about the direction of this team.

Antony, like Casemiro, would show intent and a clear demonstration of backing ten Hag. After the performance he got out of his players last night, it is what he deserves. If ten Hag is happy with his squad when the transfer window closes, and he can get the squad to buy into his style of playing, then they could emerge as title contenders.

United lost their opening two games of the inaugural Premier League season but went on to win the title. They will need a lot of pieces to fall into place for history to repeat itself. A six-point deficit on league leaders Arsenal could be overhauled with 35 games to play. If you have a free bet to use and you fancy ten Hag to get the best out of his new squad, then why not try it on United to challenge for the title.

Liam Canning
@LiamPaulCanning
3 Articles
Liam Canning is a sports journalist who is always on the look out for the major stories. His main focus is European football, but he also covers tennis, rugby and other sports.
Read Articles