A Look At The History Of The Triple Crown 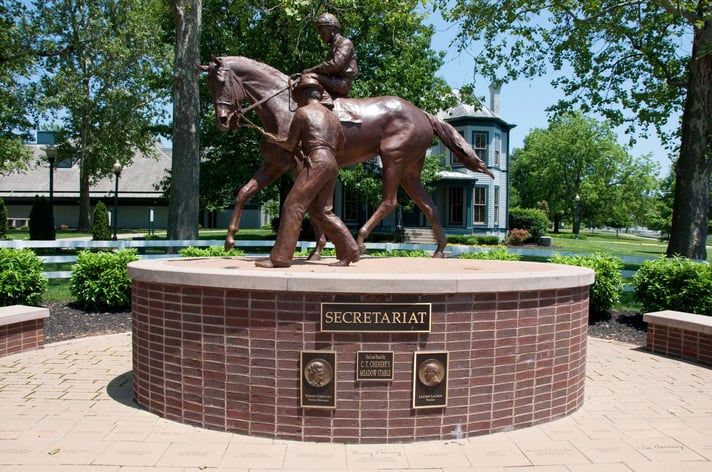 The Kentucky Derby, Preakness Stakes and Belmont Stakes. They are not just three of US horse racing’s showpieces but also the three legs of the coveted Triple Crown. To win one of these races requires a top-class equine athlete, to win two requires a horse with extra-special ability – but to win three means that the racing world, as a whole, is witnessing a three-year-old thoroughbred stamping its name in the annals of racing history.

All three races came into existence in the late 1800s, but the Triple Crown itself was only inaugurated in the early years of the following century. The three Triple Crown races are open to three-year-old thoroughbreds only, and although both colts and fillies are both free to enter, there has yet to be a filly to write her name in racing history by winning all three races. Gelded horses were only permitted to run for the first time in 1957. However, like their female rivals, no gelding has managed to win the Triple Crown.

All three races are run within a time span of just five weeks, and unlike other prestigious UK and Ireland horse racing and other races around the world, they are all run on a dirt surface, rather than the more conventional turf tracks.

The Kentucky Derby was the last of the three Triple Crown races to come into existence in 1875. Originally run over one-and-a-half miles, the race was shortened in length to its current distance of one-and-a-quarter miles in 1896. The world-famous Churchill Downs track in Louisville, Kentucky, plays host to the race on the first Saturday in May of each year, with $3 million in prize money on offer now and numerous free bet offers from the best horse racing betting sites.

The Kentucky Derby is famously known as ‘The Run for the Roses’, as each winner is adorned with a beautiful blanket of 554 red roses at the end of their victory charge. A song of the same name has greeted the winner on their return to the winner’s enclosure since 1980. It is quite a spectacle for the well over 100,000 attendees that watch on in awe from the stands at Churchill Downs.

Legendary trainers, Bob Baffert and Ben A. Jones, hold the record for most wins in the Kentucky Derby with six, while jockeys, Eddie Arcaro and Bill Hartack, are tied for most winning rides with five. The world-famous, Secretariat, holds the record for the fastest time in history, winning the race in an amazing time of 1:59.4 in 1973.

The Preakness Stakes takes place just two weeks after the Kentucky Derby, at Pimlico Racecourse in Baltimore, Maryland, and it is always a huge event at USA sports betting sites. The second leg of the Triple Crown, the Preakness is run over 9.5 furlongs, with a purse of $1.5 million up for grabs. In contrast to the beautiful red roses presented to the winner of the Kentucky Derby, Preakness winners are adorned with a blanket of Maryland’s state flower – giving name to the term, ‘The Run for the Black-Eyed Susans’ for which the race is famously known.

Bob Baffert and R. Wyndham Walden are the most successful trainers in the race’s history, with both legendary trainers on seven winners each. With Baffert also leading the way with Kentucky Derby winners, it’s usually a good idea to look at his horses when thinking about selections on horse racing betting apps. Eddie Arcaro – who also shares the record for most wins in the Kentucky Derby – stands alone as the most successful jockey in the Preakness with six victories.

Amazingly, Secretariat, also holds the record for the fastest finishing time, romping home in 1:53, just two weeks after breaking the record in Kentucky.

The final leg of the Triple Crown, the Belmont Stakes is actually the oldest of the three races, having been first run in 1867. The race was run at a variety of New York’s racetracks in its early stages, but finally set down roots at Belmont Park in Elmont, New York, in 1905.

The Belmont is the longest of the three Triple Crown races with a distance of one-and-a-half miles and is known as the aptly named, ‘The Test of Champions’. It is a race that can either elevate a horse to a status of one of the best of all time or place a horse on the long list of the Triple Crown’s ‘what might have been’ horses.

The legendary, Eddie Arcaro, completes his own Triple Crown accomplishment with his six wins making him the leading jockey in all three races. Trainer, James G. Rowe Sr.’s, eight victories in the race allows him to stand alone as the leading trainer, while, once again, Secretariat holds the fastest winning time of 2:24, meaning he holds the record in each of the Triple Crown races.

There have been 23 horses whose Triple Crown dreams have been crushed in the Belmont Stakes, the last of which being, California Chrome, who could only finish fourth in New York in 2014, much to the disappointment of many horse racing betting punters.

Only 13 horses have etched their names in racing folklore by winning the Triple Crown. Sir Barton was the first to achieve the feat way back in 1919, and it would take 11 more years before Gallant Fox joined him on the list of winners. A further six horses won the Triple Crown between then and 1948, but from then on, it seemed to become a much harder title to win.

Twenty-five years went by before another horse proved himself good enough to win the three legs, but it was definitely worth the wait. In 1973, the brilliant Secretariat arrived on the scene and changed the landscape of the Triple Crown forever. Secretariat, ridden by Ron Turcotte, and trained by Lucien Laurin, set a new winning time record in the Kentucky Derby, Preakness Stakes and in the Belmont Stakes – records that still stand to this day.

Four years later, Seattle Slew became the first horse in history to win the Triple Crown having never tasted defeat in his career. The Laz Barrera-trained Affirmed also won the Triple Crown the following year, making it the first and only time that it has been won in back-to-back years.

Incredibly, it took 37 years for the Triple Crown to be won again. There had been many near misses in the intervening years, but it took the brilliant, American Pharoah, to finally put an end to the Triple Crown drought.

American Pharoah had only tasted defeat once in his career as he rocked up to take on the nation’s best in the 2015 renewal of the Kentucky Derby, and although his victory there was not overly impressive, his subsequent Preakness and Belmont wins were breath-taking – and would have made many horse racing betting app bettors happy. It was the first Triple Crown victory for legendary trainer, Bob Baffert, but he didn’t have to wait long for a second, as three years later he was celebrating again.

Justify was Baffert’s second Triple Crown hero in 2018. Ridden by 52-year-old Mike Smith, Justify was only the second horse to win all three races having never been defeated and also became the first horse since 1882 to win the title having never raced as a two-year-old.

He had only seen a racetrack on three occasions before winning the Kentucky Derby, and he was retired to stud after also winning the Preakness and Belmont. It was quality over quantity with the last horse to triumph in the Triple Crown.

In total, there have been 23 horses who have had the misfortune to miss out on a Triple Crown by failing to win the Belmont Stakes. Some have placed, some have been injured trying and some have not even lined up. Three of the nearest misses in Triple Crown history are Silver Charm in 1997, Real Quiet 1998 and Smarty Jones 2004.

Smarty Jones finished just one length behind, Birdstone, in the Belmont having won both the Kentucky Derby and Preakness, while Silver Charm was even closer to a Triple Crown win in 1997, being edged out by just three-quarters of a length.

The prize for the nearest of misses goes to Real Quiet, however. Another horse trained by Bob Baffert, he and his rival, Victory Gallop, flashed across the line together and a photo finish was called. After the photo finish had been examined, Real Quiet had failed to win the race – and the Triple Crown – by just a nose.

The last three horses to win the first two legs but then failed to win the Triple Crown have all had injury problems to blame for their disappointment. In 2008, Big Brown’s poor performance was blamed on a hoof injury that had been picked up in training before the race, while I’ll Have Another Day never even lined up in the Belmont after picking up a tendon injury the day before the race.

In 2014, California Chrome, was well fancied to complete the Triple Crown in New York, but his chances were put to bed early in the race, as he was stepped on by another horse leaving the gate, and had to travel through the rest of the race with injuries to his heel and tendon. To show just how talented a horse he actually was, he ended the race in a dead heat for fourth place, being beaten by just two lengths. It was most certainly a case of what might have been.

Kevin Walsh
2 Articles
A lifelong Newcastle United supporter, Kevin has seen every side of the betting world. From working in betting shops, to riding horses out and everything in between, he now focuses on writing about his passion and has worked with RacingFM and the Independent News Group. You'll find his thoughts and opinions on horse racing, darts, football and more here at Bookmakers.com.
Read Articles