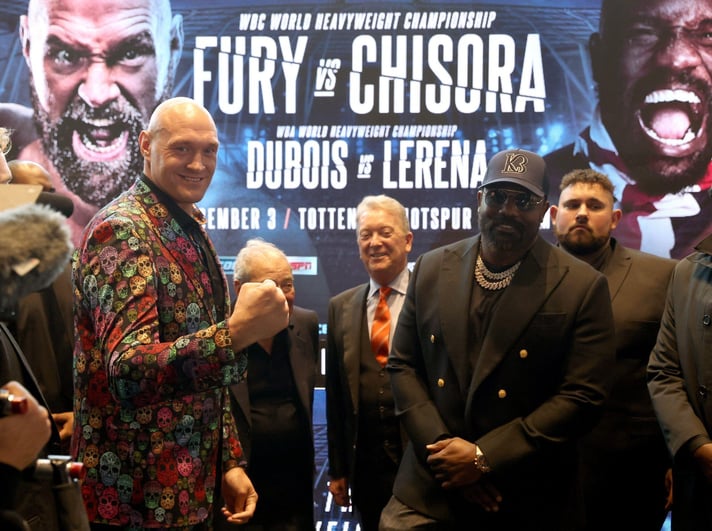 Heavyweight champions don’t always fight the opponents they should and don’t always fight the opponents they could. From the black fighters overlooked a century ago, to the missed opportunities of the 1990s and the voluntary defences even the Greatest of them all indulged in 50 years ago, a host of undeserving contenders have been blessed with title shots better men ought to have had.

This weekend, the current heavyweight champion, Tyson Fury, meets perennial contender Derek Chisora for the third time. It is a bout without the competitive credibility title fights should possess and is one only Derek requested. And yet, for all the caveats and criticism, the veteran slugger has the opportunity to become the champion of the world, and with that people have the opportunity to place wagers with betting sites.

And as boxing cliché insists, in the heavyweight division, where the biggest hitters roam, you are only ever one punch from glory. There is precedent for an upset but insufficient evidence to predict the possibility.

Punters looking for angles in the odds will need to be creative or enjoy the long shot play of Chisora landing the ‘home-run’ right hand when visiting betting apps. Chisora’s 12 defeats cannot be ignored, the form line favors the champion to such an extent that an improbable victory for the challenger will write his name alongside the likes of Buster Douglas and James J. Braddock in the pages of boxing history, such is the gulf between the two men.

Tyson Fury is 6’9”, mobile, talented and unbeaten in a career that began 14 years ago this week. He will weigh north of 270 pounds on Saturday night and enjoy further advantages in reach, hand speed and footwork.

He is punching with greater authority than he did when the two met previously in 2011 and 2014. Fury is also buoyed by the confidence of success and as a result is a far more formidable opponent than he was in those two victories. There isn’t a metric by which Chisora, now fast approaching 39, enjoys any demonstrable advantage.

If Chisora is to succeed, logic proposes he needs to make the fight messy. Ugly. He needs to hope Fury has been complacent in preparation, and that despite his own diminishing returns in recent fights, he can set a pace the Gypsy King can’t match. He will need to punch and punch and punch. Hit anything he can, from hips, to arms. Anything. Legal, borderline and beyond. These will be the stories he will tell himself and the tactics those close to him will instruct the veteran to adopt as they attempt to shock UK betting sites and everyone else alike.

He cannot outbox Fury, as he doesn’t have the speed of hand or the requisite footwork to do so. Success on the inside isn’t easy either. Any plan to be inside overlooks Fury’s ability to tie up opponents, to utilize his natural size to nullify a fighter’s leverage in the clinch and to pivot away to safety before Chisora can engage. And Chisora cannot knock Fury out up close. Wilder, a naturally much bigger puncher, needed space - Chisora will too.

Despite the antidote Fury probably possesses to the strategy of working close, it is the obvious foundation for Chisora to try to slow the younger, more mobile giant down and then land the unlikeliest of overhand rights. This assumes Fury will box and move, as he did when they met previously, but it is a historic assumption. Fury has become more assertive and aggressive in recent fights, most notably his trilogy fight with Deontay Wilder. However, if Fury does trade and remains in front of Chisora, the old man has power and poses a degree of risk, not of Wilder dimension, but he is sufficiently concussive to have knocked out Carlos Takam, a fighter of proven durability. As the earlier cliché insists, ‘at heavyweight, it only takes one big punch’.

Where is the Value in This Fight?

Sadly for Chisora, Fury’s ability to climb off the canvas versus Wilder, and other less distinguished opponents before the former WBC Champion, means the challenger may need to repeat the trick more than once to win. For those willing to risk on the underdog, a points win, even at the 35/1 offered by Betfair, is insufficiently generous to tempt all but the deluded.

A knockout win is also unlikely, a fact reflected in 40/1 odds even on round group betting at some of the best betting sites. Implausible as this outcome is, rounds 5-8, beyond the initial onslaught Fury may be presumed to deliver and before Chisora’s ageing tank runs dry, seems the most prudent of these fairy tales. Consider the outright win on Chisora at enhanced odds of 22/1 as a cover on the inevitability of a Fury victory. It will sprinkle his punches with potential if you do and animate the spectacle too.

All routes to victory have significant obstacles for Chisora. It is hard to conjure a path toward success and then stay with it to the destination.

Should Fury be Fighting Someone Else?

It is in this reality that the antipathy toward the match is rooted.

Chisora’s path to this fight is as unconventional as the man himself. Before beating the Bulgarian fossil Kubrat Pulev in the summer, he had lost three consecutive points decisions. Twice to Joseph Parker and once to Oleksandr Usyk in the Ukrainian’s debut at the weight. All were respectable performances given his relative disadvantages at the time of the matchups and against quality opponents. Deeper scrutiny of his longer record offers a range of narratives to suit the needs of both critics and advocates.

Defeats to Dillian Whyte and Robert Helenius may be Chisora’s best wins, if the contradiction isn’t too stark. In both fights, particularly his long-forgotten battle with the giant Finn, with whom Fury shares some physical similarities, Chisora was widely felt to be cheated of important victories. Wins that would have validated all the attention and opportunity he has earned for himself since. But the Helenius fight was, in boxing years, a lifetime ago.

Chisora is now in the late Autumn of a career based on rumbling aggression, a good work-rate and an ability to take big shots and keep coming. Rather like a sea wall, the tide of time erodes that type of simplistic defense, and fighters reliant on work-rate and aggression rarely succeed at such an advanced age. Chisora has lost a step since his best performances, perhaps two. He now relies more on his durability and his willingness to absorb punishment than any 38-year-old should.

The price of boxing, for rugged practitioners like Chisora who stay too long is often high but usually paid far from the spotlight they leave. Every round has become dangerous for him. The WAR moniker Chisora adopted while in partnership with former rival David Haye proposes offense but has more closely reflected his defiance as opposed to his destructive capabilities. He will need all his remaining resistance to be any more than a well-known punch bag come Saturday night.

Expect Fury to Complete the Trilogy

Attention turns to how Fury will complete the job. His physical advantages of size, speed, footwork and perhaps resistance, energy levels too, alongside his superior form and record insist he is a prohibitive favourite.

Despite this obvious superiority, there may be value in investing in a longer fight when thinking of your wagers at the best betting apps. Fury and Chisora hold a mutual respect, and their kinship, forged in part by their two previous encounters, does cast a different hue across proceedings. In the face of widespread criticism, that Fury hasn’t responded well to in certain interviews, the champion could ‘carry’ Chisora later and box in the more circumspect style of the past.

Fury relishes a fight these days and can mix it on the inside and commits wholeheartedly on offense in ways he was once reluctant to. It is conceivable he may merely match Chisora early, when Chisora’s energy and power may be highest and then turn the screw later in the fight as Fury’s natural advantages begin to weaken the ageing challenger.

To that end, the over 6.5 rounds at 8/11 with bet365 may be worth a small investment alongside the 13/5 available on rounds 7-12 with Paddy Power. Chisora is tough and fading, yes, but he’s also stubborn and strong. He will not fold easily, and a respectful Fury, who isn’t a single-shot knockout puncher, could take a little longer than some presume to break through. Combining the above offers a modest return but then covers all Fury outcomes, including points decisions, in the second half of the fight.

If pushed, and for those who prefer the pursuit of a perfect pick and the associated rewards, I’m leaning toward a stoppage win for Fury in the eighth at 13/1 or the ninth at 18/1 with William Hill, PaddyPower and Betfair. But a built bet based on a Fury win, in the second half, with a cover on a Chisora ‘miracle’ shot, should offer marginal gains for this heavyweight clash.

How to Watch Joshua vs. Chisora 3

BT Sport Box Office will broadcast the fight via a pay-per-view in the UK from the Tottenham Hotspur Stadium, London, on Saturday, December 3. Those checking the fight out with USA sports betting sites can watch the action unfold on ESPN+.

Ring walks for the bout are expected to take place around 16:00 ET.