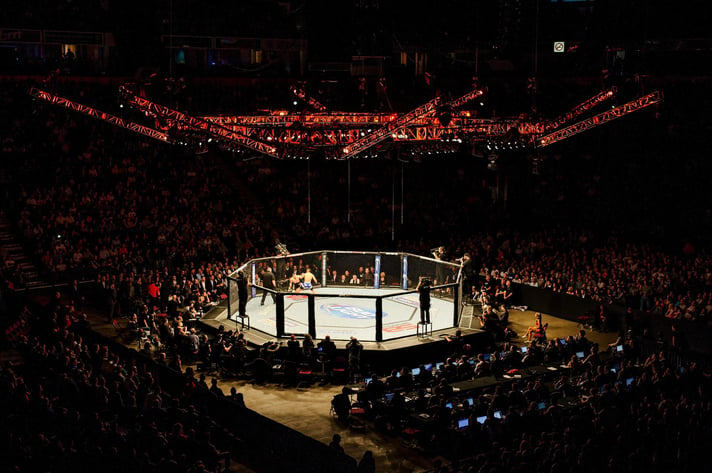 Madison Square Garden plays host to UFC 281 this Saturday. The Main Card is scheduled to start at 22:00 ET and features five fights that look like they’ll be close-fought encounters, based on the odds available at UFC betting sites. Two title fights will see 'The Last Stylebender', Israel Adesanya, defend his Middleweight title against Brazil’s Alex Pereira. In the women’s Strawweight division, China’s Zhang Weili will be looking to dethrone Carla Esparza.

With a loaded undercard and some real bangers in store, this promises to be an exciting night of action. So strap yourself in and get ready for our UFC 281 Main Card preview.

Alex Pereira has skyrocketed through the UFC Middleweight ranks. Having made his UFC debut just over a year ago, he’s racked up three impressive victories, including stoppages of Andreas Michailidis and Sean Strickland. His 3-0 record sees him ranked No.4 in the Middleweight division and staring at a title fight.

Adesanya often outclasses his opponents, as evidenced by his last three fights resulting in unanimous decision wins. These two have shared a ring before though, – in a kickboxing bout for Glory For Heroes. That fight ended with Adesanya looking up at the lights and some predict a similar outcome this week. It promises to be an epic, intriguing fight. In all likelihood, Adesanya drags Pereira into the deep waters of a fifth round and ekes out a decision victory, or Pereira repeats the trick and knocks Adesanya out to become the new Middleweight Champion.

Redemption might well be on the cards in UFC 281’s co-main event. Zhang Weili looks to regain the Strawweight title she lost and failed to reclaim in successive fights against 'Thug' Rose Namajunas. Namajunas subsequently lost the belt to Esparza at UFC 274 in May. A vicious knockout of Joanna Jedrzejczyk by Weili at UFC 275 saw her ranked #2 in the division and on a course to this Saturday.

This promises to be a real clash of styles. Weili will be keen to keep the fight on the feet and use her impressive striking to end the fight inside the distance. With her having KO and TKO victories to her name with spinning backfists, knees and punches, this will be her best path to glory.

Esparza’s UFC career spans almost eight years. As the inaugural Women’s Strawweight Champion, there isn’t much the Cookie Monster hasn’t seen. This fight has a lot in common with the other title fight on the card. Esparza is likely to try to grapple her way to a decision victory, whereas Weili will be trying to end it. It looks like a fascinating matchup.

Just watching this fight might hurt. Dustin Poirier returns to the octagon for the first time in almost a year to take on the explosive Michael Chandler. 54% of Dustin Poirier’s UFC wins have come by KO/TKO, while the same can be said of 48% of Chandler’s wins.

On average, Poirier’s fights last around 10 minutes (10:02 to be exact), and Chandler is in the cage for an average of just seven minutes and 16 seconds. Don’t look away for a second of the action in this one. It’s sure to be a high-octane brawl from the opening bell to the end and is unlikely to be a full 15-minute fight.

As Frankie Edgar said – he can’t fight forever. The UFC and indeed MMA as a sport will see Edgar in action for the final time at UFC 281. An ultra-popular fighter, Edgar shares the record for most Fight of the Night bonuses in UFC history. He may have been stopped in three of his last four fights, but Edgar won’t go down easily in his UFC swansong.

On the other side of the cage on Saturday will be a surging Chris Gutierrez. Despite bouncing around the weight divisions, Gutierrez is undefeated in his last seven fights. He’ll no doubt be the bad guy for the fans at Madison Square Garden, but he should have too much firepower for the outgoing Edgar. It’ll be a tough one for Gutierrez, given the huge respect he has for 'The Answer'. This could just be a victory lap for Frankie Edgar and a fight he loses on the judges’ cards.

Dan Hooker is one of the more popular UFC fighters thanks to his forward-going style. He’ll be looking to steady the ship and improve his recent 1-4 record in his last five fights this weekend. Standing in his way will be Peruvian grappler Claudio Puelles.

Puelles is riding a five-win streak into this one and will be trying to claim another big scalp…or perhaps I should say knee. Three of those five wins have come via submission by kneebar. Hooker will be landing big shots, while Puelles will be taking the fight to the ground. If they’re standing, it sets up for Hooker. If the fight goes to the mat, Puelles’ win streak is going to six.