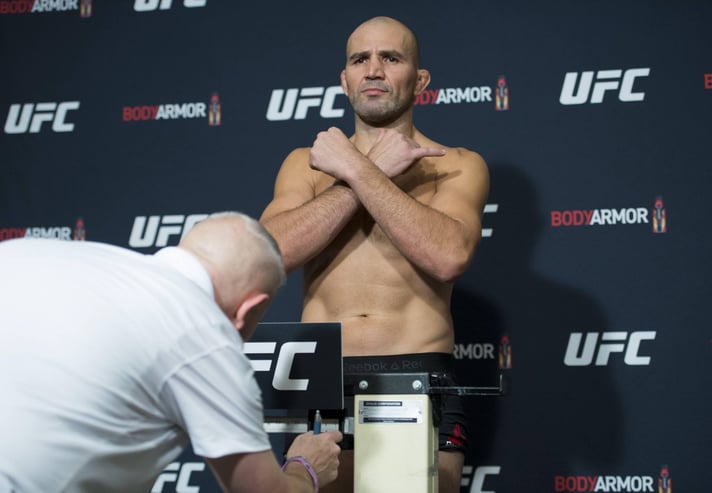 The UFC heads to the Jeunesse Arena in Rio de Janeiro, Brazil, for its first pay-per-view of 2023. The main card of UFC 283 consists of five fights, with a Brazilian in each one. Two title fights headline the show, with Deiveson Figueiredo taking on Brandon Moreno for the UFC Flyweight Championship in the co-main event, and Glover Teixeira taking on Jamahal Hill in the main event for the vacant UFC Light Heavyweight title. It promises to be a busy night at UFC betting sites, so let’s break down the action.

Glover Teixeira is a UFC legend. Since making his debut for the company over a decade ago, he’s gone on to be a draw at some of the organization’s biggest international events. UFC fans in Brazil, Canada, Sweden, Germany, UAE and Singapore have all got to see the 43-year-old in action in the flesh.

For most fighters, 43 is far beyond retirement age. At the very least, your abilities have diminished notably. Teixeira isn’t most fighters, though, and he claimed his first UFC title in October of 2021, before losing it in one of the best fights of 2022 to Jiri Prochazka. A defection and a draw between two other top contenders mean the title is vacant, and this Saturday’s main event is for the gold.

It’s hard not to let sentiment get in the way here. Teixeira is hugely popular and has done more for the sport of MMA than most will realise. A second Light Heavyweight title reign would be a popular outcome. Standing in his way is American Jamahal Hill.

Hill has shot into contention after three consecutive impressive victories over Jimmy Crute, Johnny Walker and Thiago Santos. He looks a sure-fire future champion but is lacking big fight experience, with this being just his second UFC pay-per-view.

Maybe it is sentiment getting in the way, but Teixeira is the pick. He’s 12 years older than Hill, is carrying the effects of 28 more career fights and lost the only fight he’s been in in the past 15 months. But he’s been there and done it before. A second Light Heavyweight Championship for Teixeira awaits.

The boxing and fighting worlds love trilogies. On Saturday, we get the UFC’s first-ever tetralogy (I looked it up to make sure!) when these two fighters square off for the fourth time in a little over two years. The UFC Flyweight Championship will be on the line, when Figueiredo (champion) takes on Moreno (interim champion).

Based on the odds at UFC betting apps, where this is priced as a pick ‘em, and on their previous fights – a draw and one win each – this is going to be tight. It’s even tough to choose between these fights based on nicknames, as it’s Deus Da Guerra (God of War) v The Assassin Baby.

Moreno has seen the octagon more recently, in a TKO win over Kai Kara-France at UFC 277, which may end up standing him in good stead. In such a close-looking fight, the roar of the Brazilian crowd might be that extra 1% Figueiredo needs, and he’s the call based on that and that alone. It should be a great fight.

In a fight that could be argued belongs further down the card, #5 Welterweight Gilbert Burns takes on #12 Neil Magny. Burns has lost two of his last three fights but is still a heavy odds-on favorite for this one. It’s easy to see why, considering those two defeats came against Kamaru Usman and Khamzat Chimaev.

Magny has mainly been competing on UFC on ESPN cards, as opposed to the PPVs Burns has been appearing on. He’s won three of his last four fights but against much inferior opposition.

This isn’t a fight that jumps off the page as being particularly exciting. We have two fighters in their mid-thirties who are just half a notch below the very top level. Each fighter has gone the distance in five of their last seven fights. That seems likely again this Saturday, but Burns should be too classy for Magny.

Jessica Andrade is the biggest favorite on the main card of UFC 283. At 5’1”, her raw power should not be underestimated. Just ask Cynthia Calvillo, Katlyn Chooagian, Rose Namajunas or Karolina Kowalkiewicz, who have all been stopped by her.

Lauren Murphy comes into this one on the back of a hard-fought win over Miesha Tate. A big underdog despite being ranked two spots higher than her opponent, she’ll be hoping to use her significant height and reach advantage to get the win.

On what could be a good night for Brazilians, Andrade should have too much firepower for Murphy. Murphy’s only been stopped once in her career, so it would be no surprise if the scorecards are needed. It would be a massive surprise if it’s not Andrade’s hand getting raised after the fight.

The last few years have not been kind to Johnny Walker. After exploding onto the scene during Dana White’s Contender Series and then winning his next two fights with explosive first-round knockouts, the wheels came off. A loss at UFC 244 was followed by three more in his next four fights. A first-round submission of Ion Cutelaba at UFC 279 may have Walker back on the right path.

Saturday, he faces submission specialist Paul Craig. With 13 of his 16 career wins coming by submission and only two of his 22 career fights going the distance, it might be a safe bet to assume this fight won’t go all the way.

Walker always had tons of potential, and perhaps 2023 is the year he truly lives up to it. A KO victory for the adopted Irishman looks to be on the cards. The crowd will be rocking for this one, and Walker should give them what they want.

There are five fights on the UFC 283 Prelim card. Beyond any doubt, the man most fans will be tuning in to see is Mauricio ‘Shogun’ Rua, who’ll enter the octagon for the last time. He’s sure to be a popular selection at sports betting sites this weekend. Here’s what’s lined up for the UFC 283 Prelims:

There are also six early UFC 283 prelims, which are scheduled to start at 18:00 ET, if all of that wasn’t enough. Be sure to check out our top sports betting sites, where free bets and other betting welcome offers are available for those betting on UFC 283 this weekend.