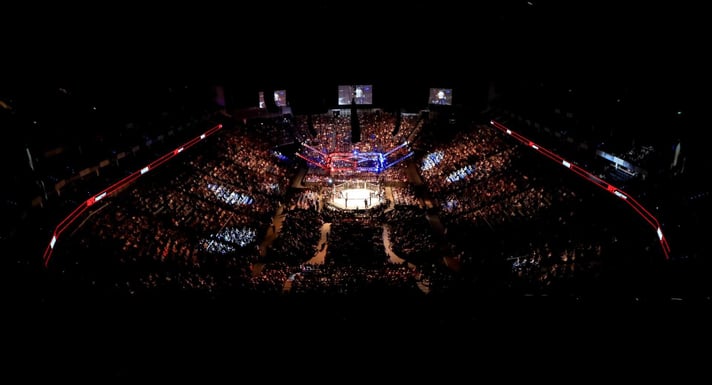 After last week’s blockbuster UFC 281 event, the UFC wheel keeps on turning. This Saturday, November 19th, the UFC APEX in Las Vegas hosts UFC Fight Night: Lewis vs. Spivac. The main card is scheduled to start at the much earlier time of 16:00 ET, so keep that in mind if you plan on getting involved on any UFC betting apps. There’s sure to be some hard-hitting action, as the five-contest main card features two heavyweight fights, two welterweight fights and one from the light-heavyweight division.

While we won’t see the same big names as last week, nor will we see any titles defended, there’s still plenty to sink your teeth into at UFC betting sites. Let’s take a look at the main card of this week’s Fight Night as well as the full lineup in the prelims.

Derrick Lewis has suffered some devastating defeats lately. He’s been stopped in both fights in 2022, against Sergei Pavlovich and Tai Tuivasa. He lowers his sights this week but has landed them on a surging Serghei Spivac.

The Moldovan comes into this one on the back of two straight TKO victories, over Augusto Sakai and Greg Hardy. While these aren’t the same calibre of opponent Lewis has been facing recently, Spivac has looked impressive and will soon be expecting to have a ranking beside his name.

As a pro, Spivac has seven KOs and six submissions to his name, giving him a more varied arsenal than your average UFC heavyweight. Don’t expect this fight to go the distance but do expect to see Spivac continue rising up the ranks.

How can you not be intimidated by a man with the nickname “The African Savage”? After a split decision loss at UFC 272 in March, where he was deducted a point for eye pokes, Nzechukwu got back to winning ways in July by scoring a TKO win over Karl Robinson.

Standing opposite him on Saturday will be Moldova’s Ion Cutelaba, who has somewhat hit the skids recently, going 1-4-1 since the start of 2020. This is another fight that is unlikely to last the full 15 minutes. Nzechukwu should have far too much for Cutelaba and should get it done early.

The UFC might have its next poster boy in Waldo Cortes-Acosta. The Dominican ex-baseball player has just as much charisma as he does power in his fists. “Salsa Boy”, as he’s known, appeared to be rocked more than once in his UFC debut in October. Ultimately, he scored a unanimous-decision victory, but it wasn’t as plain sailing as it sounds.

Chase Sherman’s UFC career has been pretty lacklustre. He’s 4-9-0 in the UFC, with three KO/TKO defeats coming by way of punches. Cortes-Acosta will be keen to get a statement victory in his second UFC appearance, and he should get a stoppage with his fists in this one.

This is the closest fight of the night, at least in terms of the odds at betting sites. Portugal’s Andre Fialho has shown serious knockout ability this year. His two wins in 2022 were both first-round stoppages caused by punches.

It’s been a very long time since Muslim Salikhov showed similar. His last KO victory came over Nordine Taleb, way back in 2019. He’s fought four times since then, winning three by decision and losing to Li Jingliang by TKO. In keeping with the theme for the rest of the card, this one could end early, with Dialho securing a winning 3-2-0 record for the year.

Australia’s Jack Della Maddalena is the shortest odds of all fighters on Saturday’s card. It’s pretty easy to see why. He’s on a 12-fight win streak since losing his first two fights as a pro. Back-to-back TKO victories tell the story of his 2022, and he’s well placed to make that three from three.

His opponent on Saturday, Englishman Danny Roberts, has been seen just once this year, in a losing effort against Francisco Trinaldo. Each of these fighters possesses the kind of explosiveness to end this fight early. Recent evidence suggests the Australian will be the one to do it.