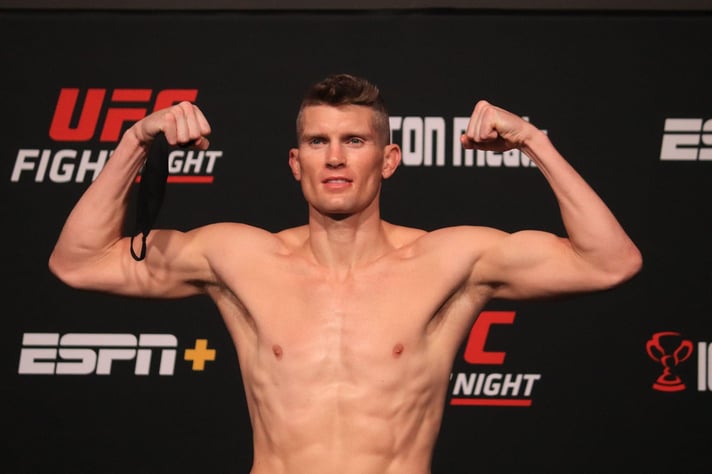 The UFC took a rare week off last week, to allow for Thanksgiving celebrations. This Saturday, they get the show back on the road as they head to the Amway Center in Orlando. UFC betting sites have odds available on all nine of the Prelim fights, as well as the six Main Card bouts.

The #6 ranked Stephen Thompson takes on Kevin Holland in a welterweight bout, which is sure to be a hard-hitting affair. Before getting involved at one of our top sports betting apps, check out our full preview of the Main Card, which gets underway at 10pm ET on Saturday night.

Stephen Thompson, or Wonderboy as he’s known, will walk to the octagon with Jack Black on Saturday. Once he gets there, he’ll be hoping to end a two-fight losing streak, having suffered unanimous decision losses in his last two. His opponent, Kevin Holland, will be looking to get back to winning ways, following a submission defeat at the hands of the awesome Khamzat Chimaev at UFC 279.

We’re scheduled for five rounds in this one, and it would be no surprise if all of them were needed. Holland is the slight favorite, and justifiably so. He lost nothing in defeat last time, stepping in as a last-minute replacement. Prior to that, he was impressive in wins over Tim Means and Alex Oliveira. These are two classy fighters, but Kevin Holland may just edge it on the judges’ scorecards.

More welterweight action here, as Bryan Barberena looks to claim the scalp of another UFC legend. At UFC 276, he stopped Robbie Lawlor in a second-round TKO victory. This Saturday, he’ll be looking for more of the same against 14-year UFC veteran Junior dos Anjos.

Dos Anjos, at the age of 38, isn’t the force he once was. The former UFC Lightweight champion now frequently finds himself on UFC Fight Night cards. He still has all of the tools to compete at this level and is a very short-priced favorite to have his hand raised. Expect this one to go the distance and the Brazilian to claim a remarkable 32nd career victory.

This promises to be an intriguing flyweight bout between two fighters known for their submission prowess. Five of Nicolau’s 20 career fights have ended with his hand raised thanks to a submission, while the same can be said of nine of Schnell’s 23 career fights.

Submission specialists tend to have good submission defense, as evidenced by the two combined submission losses in their careers. This is another fight which looks a good bet to go the distance. It’ll be one for technical fans, but mightn’t be a barn-burner.

If you want barn burners, you’ve got the right man in Tai Tuivasa. He’s known for two things – drinking beer out of shoes and ending fights. He was outclassed in September in UFC’s Paris event against Cyril Gane, but before that had rattled off a five-win streak, all by KO or TKO.

His opponent on Saturday, Poland’s Sergei Pavlovich, has seen all five of his UFC fights end in the first round. The fight not going the distance is a massively short price at UFC betting sites. Pavlovich in round one could be the way to bet this one.

Jack Hermansson just can’t keep his momentum up. His last six fights have seen his record go WLWLWL. Strangely, all of those losses have come in the main event, so there’s a possibility he’ll find these calmer waters a little easier to navigate.

This fight was originally scheduled to be against Derek Brunson, who has since pulled out due to injury. Step up, Roman Dolidze. It’s not easy taking a fight on short notice, but Dolidze’s knockout power should always be respected. Ultimately, Hermansson should be able to plot his way to a win, likely on points.

The curtain jerker for the UFC Fight Night’s main card is a fascinating fight. Kyle Daukaus was 9-0-0 as a pro before coming to the UFC in 2020. He’s since won two, lost three and had a no contest. He’s very much a submission specialist, but he could struggle if his opponent, Eryk Anders, keeps the fight on the feet.

Anders has three UFC KO victories to his name and looks like a good bet on UFC betting sites to make it four on Saturday. He’s a pretty big underdog, but Daukaus showed his vulnerability in his last fight in June, suffering a first-round TKO loss at the hands of Roman Dolidze.