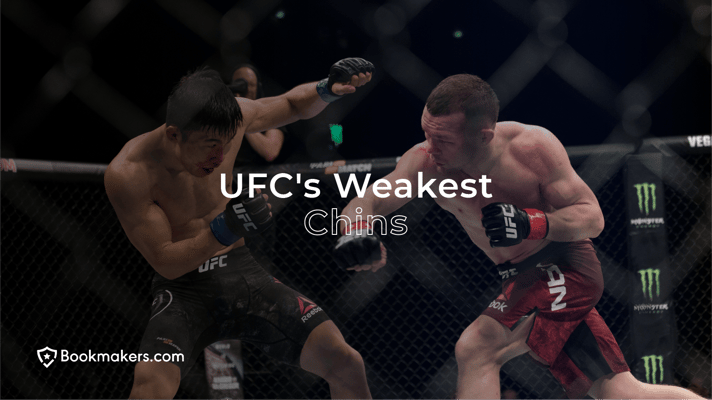 UFC has seen a significant rise in popularity in recent years, largely thanks to the personalities that populate the sport, including the outspoken Irishman Conor McGregor.

But as a spectacle, it’s also well-known for its incredible excitement and jaw-dropping knockouts – just look at Michael Chandler’s recent knockout win against Tony Ferguson at UFC 274. That got us thinking: which of the top fighters are most likely to dish out knockdowns, and which are most likely to suffer them?

Comparing UFC records of the top pound-for-pound fighters, we’ve been able to determine those with the weakest chins, and those with the strongest strikes. 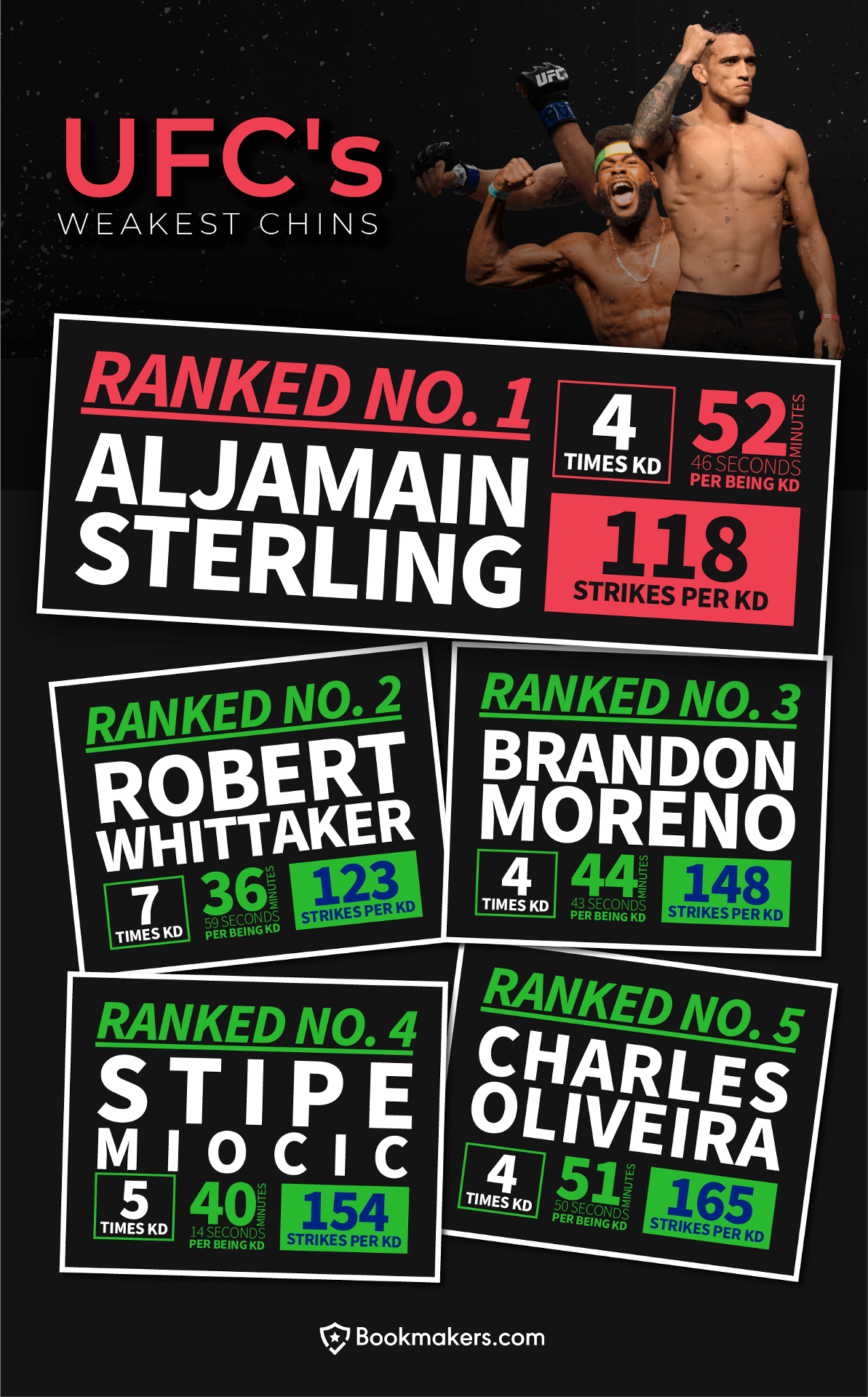 Which Fighters Have the Weakest Chins?

Comparing fighters of all weights and classes, we can reveal that the weakest top pound-for-pound UFC competitor (statistically) is Aljamain Sterling.

In fact, it only takes an average of 118 strikes to knock Sterling down, with four knockdowns conceded during his 211 minutes and 50 seconds in the ring. However, to Sterling’s credit, he’s thrown 962 strikes, more than twice the number of strikes he’s received (472) and only suffers a major blow every 52:46.

Following closely behind, New Zealander Robert Whittaker exhibits almost-equal form, suffering a knockdown every 123 strikes. This puts him on the floor every 36:59. However, he’s far from a punch bag and has floored his opponent on 10 occasions throughout his professional career.

Next up, Brandon Moreno is knocked down every 148 strikes received, placing him as the third-weakest chin among the top pound-for-pound fighters. With four knockdowns received in 178:54 in the ring, the Mexican is used to facing a barrage of strikes, roughly one every 18.1 seconds he’s in the ring.

In fourth, Stipe Miocic hits the floor after every 154 strikes, while receiving a hit every 15.7 seconds – although he does throw a strike every 12.4 seconds. As such, despite going down five times himself, Miocic has managed to knock down his opponent on seven occasions.

Finally, rounding out the top five weakest chins, we have Charles Oliveira, with a knock down every 165 hits received. This puts him on the floor every 51:50, with a blow taken every 18.9 seconds. However, he’s another who can give as good as he takes, with an impressive record of seven knock downs against opponents. 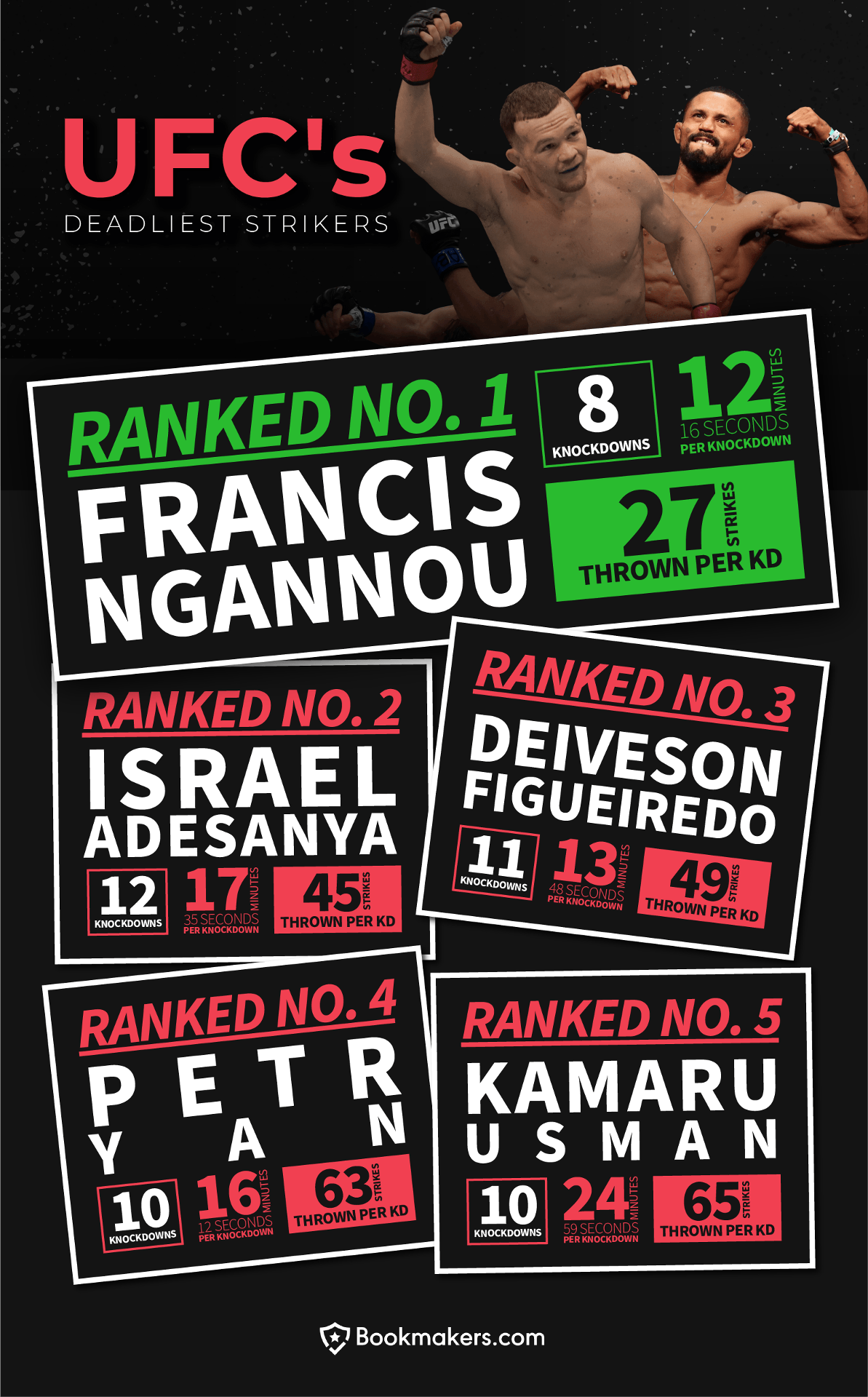 Which Fighters Have the Strongest Strikes?

We’ve looked at which of the top pound-for-pound fighters have the weakest chins, but who places on the opposite end of the scale and can be considered the deadliest in the ring?

Analyzing UFC data of the current top fighters, the most dominant fighter is Francis Ngannou, managing a knockdown with every 27 strikes thrown, which puts his opponent on the floor every 12:16. Even more impressively, the 35-year-old has never been knocked down himself and has received just 212 strikes during his 98:12 in the ring.

Placing second, Israel Adesanya puts his opponent on the floor every 45 strikes, on average, with an impressive knockdown record of 12-0. And, with a total of 811 strikes thrown throughout his career, he hits his opponent every 15.6 seconds.

Not far behind, Deiveson Figueiredo knocks down opponents every 49 strikes, and throws a punch or kick every 18.3 seconds. With a respectable 11 knockdowns during his 151:55 in the ring, that’s one every 13:48.

Petr Yan also ranks among the strongest UFC fighters, with a knockdown for every 63 strikes he throws. With 10 career knockdowns across a career that currently spans 162:04, that’s a crucial blow every 16:12 minutes.

And finally, Kamaru Usman completes the top five UFC fighters by striking strength, recording a knockdown every 65 strikes. He’s one of the quicker fighters, too, throwing a strike every 12.9 seconds and only receiving a blow every 23.2 seconds.

Looking at all fighters across both lists, it’s interesting to compare their competitive records alongside the data we’ve collected. For even more insight into the combative world of UFC, check out all the latest betting offers and UFC betting sites.

To find the UFC’s deadliest striker, knockdowns delivered was divided by the number of strikes thrown to see how many strikes each UFC fighter has thrown per knockdown.

Ring times were also analyzed to add further information to the findings.

Dean Ryan
@Onthenoseinfo
22 Articles
Dean is respected tipster, journalist and broadcaster on sports - mainly horse racing. Having featured across radio, TV and podcasts, his betting knowledge is developed over decades in the gambling industry across a number of different publications and platforms. You will usually find him on social media discussing Tottenham Hotspur or the Cheltenham Festival.
Read Articles