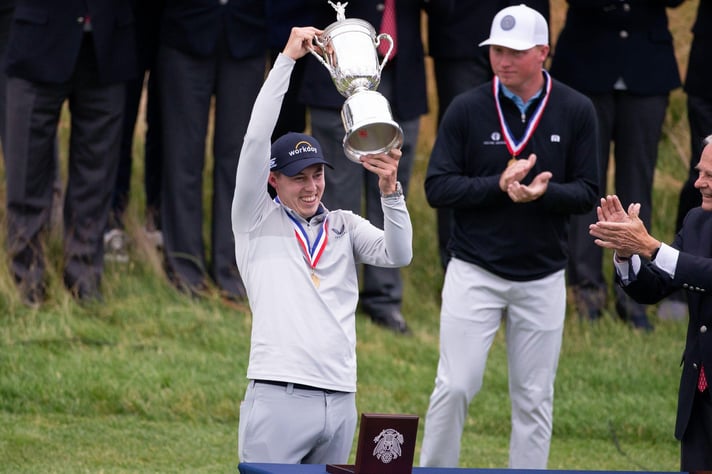 The US Open is one of the four golf majors and is the third to take place during a calendar year. The tournament is held at a different course each year, and it’s always regarded as a fiendishly-difficult challenge for the world’s leading players, with the action occurring during mid-June.

The prize money for the US Open is traditionally bigger than any of the other three golfing majors, with The Country Club at Brookline, Torrey Pines and Winged Foot having been some of the recent locations. Matt Fitzpatrick, Jon Rahm and Bryson DeChambeau have been among the winners.

Golf betting sites will offer US Open golf betting all year round so that you can bet on the winner, although the majority of wagers are placed when it’s US Open week and the build-up starts in earnest. There is the chance to place each-way bets and some bookmakers will provide enhanced betting offers on additional places.

Multiple US Open Champions Few and Far Between

It takes a lot to win a US Open golf title, and it takes even more to become a multiple-time winner. Jack Nicklaus and Ben Hogan are among those who have won four times, with Tiger Woods managing to land three titles and the only other player to recently double up was Brooks Koepka, who secured back-to-back crowns in 2017 and 2018.

Between 2015 and 2020, we saw a predictable succession of US winners, although the 2021 tournament was won by Jon Rahm, while Matt Fitzpatrick was able to triumph 12 months later. It’s notable that Americans Will Zalatoris and Scottie Scheffler were just one shot off the pace on that occasion.

The last three winning scores have been -6 which serves to highlight that the players are in for a real battle to make par on several of the holes. This tournament rarely turns into a birdie-fest, although Gary Woodland’s -13 was enough to stop Koepka winning three US Opens in a row in 2019.

2022 winner Matt Fitzpatrick was able to shoot 68 on three occasions to land victory in the most recent US Open, with the Englishman not going over par for any of his four rounds. He was regularly in contention from the first round onwards and was therefore among the betting favorites on an in-play basis.

The 2021 champion Jon Rahm was only two shots off the lead after the first round of the US Open that year, and he remained in contention before shooting a tournament-winning 67. Bryson DeChambeau was the only player that actually managed to shoot under par, and it was noticeable how much money came for him before the competition.

Whether you are betting win only or each-way, you should look at some of the in-form American golf players. In the past, it has paid to side with in-form players, with the last 10 winners having posted a top eight finish within their last five tour events. It’s a virtual guarantee that some US golfers will run into a place, and it’s therefore worth considering the best golf betting sites who are providing the best place terms.

How to Back Winners on the US Open Outright Market

There are a number of potential paths to profit when it comes to the US Open. If you are betting on the winner market, then you can choose to do this on a pre-tournament basis or alternatively wait until after each round has been played to assess the state of play. It’s especially useful after the second round when the cut has been made.

Many bettors will consider backing several golf players to win the event. Providing that you are not selecting all the favorites, you can stagger your betting stakes so that you can leverage a potentially handsome return for whichever player ends up winning. The huge odds available on players pre-tournament at sports betting sites are one of the most appealing characteristics of golf betting. More conservative bettors may prefer to wait until after the cut, taking lower odds, but eliminating the chances of losing their bet before the weekend action has started.

Alternatively, there is the opportunity to place each-way bets on the US Open and sports betting apps will create a number of extra places for a tournament of this magnitude. The number of places offered will vary among bookmakers, so it is important to shop around and find the most appealing place terms. Generally, the number of places offered will increase the closer it gets to the event, and it is not uncommon to see the best golf betting websites offer 10-12 places on the week of the tournament. This is in contrast to the 5/6 places that are available to golf bettors, months in advance. This is a major reason why many golf betting enthusiasts hold fire until closer to the off, to avail of such bookmaker concessions.