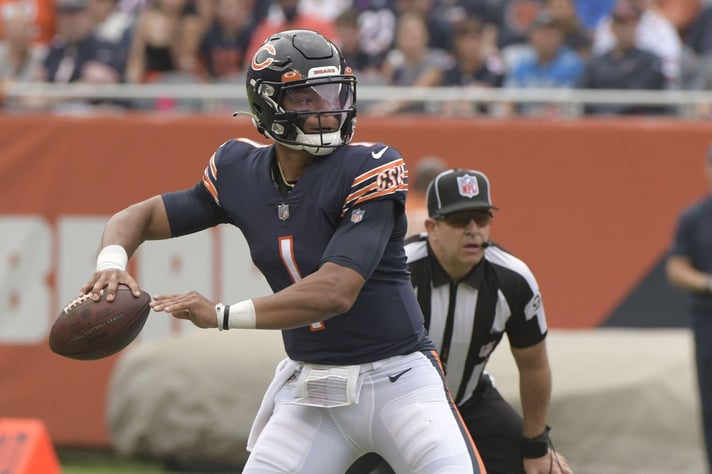 With four teams on bye during NFL Week 10, there are a number of fantasy darlings taking the week off. With no Lamar Jackson, Joe Burrow, or Rhamondre Stevenson available, the DFS pool is a little shallower than usual this week.

Our NFL Week 10 DFS advice measures up the matchups, recent trends and prices at the likes of DraftKings and FanDuel to find the must start DFS players at each position for Week 10. Some will be obvious names who are pricey this week, while others will be Hail Mary plays at the other end of the cost spectrum. With these NFL DFS picks in your lineup, you should be on your way to a good week. Without further ado, let’s get to it. (Side note - we don’t do kickers!)

Coming off a record-breaking performance last week against the Dolphins, Justin Fields will be all the rage this week. He showed real week-winning ability thanks to his rushing, and this week his Bears host the Detroit Lions.

The Lions are bottom four in the NFL when it comes to fantasy points allowed to opposing quarterbacks. His rushing provides him with a very safe floor in any given week, while the matchup this week gives him an incredibly high ceiling. He’s an obvious choice and will be in a lot of lineups. At $6,500 with DraftKings, he’s much cheaper than other elite options like Josh Allen and Patrick Mahomes. Make sure you don’t miss out, and get him in your lineup.

Wilson made his Miami Dolphins debut last week and made an instant impact, rushing nine times for over 50 yards and catching three passes for another 21 yards and a touchdown. The Dolphins haven’t gone all-in with Raheem Mostert. They have largely ignored him in the passing game and perhaps found him hard to trust, given his injury history.

This is a game the Dolphins should win. With an extra week as part of the Dolphins setup, Wilson looks like a really solid play. He should be in line for more touches than last week, against a Cleveland Browns team that has struggled against the run this year.

Olave’s usage has seen a major increase since missing Week 6. He’s averaged 10 targets per week over the last three games, and with Michael Thomas on IR and Jarvis Landry still not fully healthy, there is no reason we should see a reduction this week. Olave has also been the team's primary red zone target over that period as well, so there is touchdown upside to this pick.

He even has a good matchup in his favor. The Steelers are allowing more DFS points per game to opposing wide receivers than any other team in the NFL. This gives Chris Olave ($6,800) a great chance to make a mockery of his price. Don’t be surprised to see him priced higher in future weeks.

Whilst the matchup here doesn't look great on paper, it needs to be taken with a pinch of salt. The New Orleans Saints have recently played a Mark Andrews-less Ravens and Darren Waller-less Raiders, so their form against the position is a bit skewed given who they have faced.

Freiermuth already commands a high target share, and Steelers HC Mike Tomlin has already confirmed this will increase in Chase Claypool’s absence. At $4,200, expect plenty of catches and yards with a decent chance to find paydirt.

Ryan Tannehill is expected to miss out again for the Tennessee Titans, meaning Malik Willis will be getting the start. That likely means a heavy dose of Derrick Henry. The Denver Broncos are a solid run-stopping unit, and know that if they stop Henry, they stop the Titans.

If you spend up elsewhere in your Week 10 DFS team, the Broncos are a shrewd pickup, given that their price is below average for this week’s DSTs. At the very least, they should be able to prevent the Titans from putting up a lot of points. If Malik Willis is forced to keep the Titans in the game with his arm, we could see some turnovers.

These are just some of the players to be targeting for your DFS lineups this week. They’re also some of the more popular NFL prop bets available at NFL betting sites this week. With rushing, receiving, passing and even kicking lines available, there are plenty of ways to get involved. We recommend adding these to your Week 10 DFS lineups though.