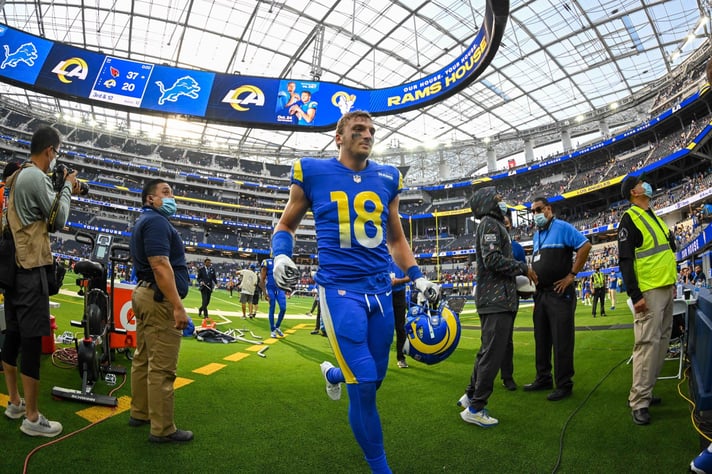 Week 11 of the NFL season sees a lot of big names on bye. This season's WR1, Tyreek Hill, and fellow Dolphin receiver Jaylen Waddle have the week off, alongside last week’s must-start running back, Jeff Wilson. After traveling to Germany, the Buccaneers and Seahawks have a Week 11 bye, so you can say goodbye to DK Metcalf, Mike Evans, Kenneth Walker III, Chris Godwin and co. Rounding off the teams on bye are the Jacksonville Jaguars, meaning Travis Etienne and Christian Kirk won’t be in your DFS lineups this week at FanDuel or DraftKings.

But who should be in your lineups? Check out our Week 11 NFL DFS picks below.

No, really. Just keep reading! With just one multiple-passing touchdown performance to his name this season, Russell Wilson hasn’t exactly slotted in to life with the Denver Broncos seamlessly. But there’s reason to be optimistic. That multiple-TD showing came against this week’s opponents - the Raiders.

In Week 4, Russ cooked his way to a QB3 performance for the week, with a 17-237-2 line through the air and another 29 yards and a touchdown on the ground. The Raiders are bottom-three against QBs this season and are unlikely to be able to improve upon that this week.

Yes, he’s the most expensive running back in DFS this week, but there’s very good reason for that. Barkley is averaging 22 carries per game this season and around three receptions, so his workload is locked and loaded. Add to that the fact that the Giants are favorites for this game on NFL betting apps, and everything points towards him getting a ton of valuable touches.

The Lions have been involved in more than their fair share of shootouts this season, so the game is likely to see plenty of points. Barkley is sure to be in a lot of winning DFS teams this week, and there’s an easy way to save money on your lineup elsewhere so you can afford him.

Available at the super-low price of $3,900 with DraftKings, Los Angeles Rams receiver Ben Skowronek is a very interesting play this week. He was on the field for 98% of the Rams’ offensive snaps last week, drawing seven targets in the process.

With Matthew Stafford expected to be back and star receiver Cooper Kupp out for the foreseeable future, Skowronek should be in line for a lot more work. He’s hit double-digit PPR points just three times this season, but in PPR formats, with the chance of a touchdown, he represents an opportunity to spend up at other positions this week.

A lot of what was said about Russell Wilson applied to Greg Dulcich too. The Las Vegas Raiders are not good at defending tight ends (or any other position really). That Week 4 game saw them allow Eric Saubert to have a 25-yard catch.

Greg Dulcich is a far more athletic threat than Saubert, and he is carving out a nice role for himself in Denver. With Jerry Jeudy questionable for the game, Dulcich might just form a nice Broncos stack with Wilson this week that could net big results for DFS.

Through six games for the Pittsburgh Steelers, rookie quarterback Kenny Pickett has thrown a massive eight interceptions. We all know what the Bengals are capable of on offense. That means the Steelers will have to air it out to keep up, increasing the likelihood of sacks, picks and pick-sixes.

If that doesn’t come to be, then there’s the safety net of knowing this is a divisional game, which often results in low-scoring games. Either way, the Cincinnati Bengals are the DST to get into your DFS lineups this week.

We expect big games from these players this week, making them interesting NFL prop bets too. You’ll find props for these players, the latest NFL odds and a whole lot more at the best NFL betting sites.