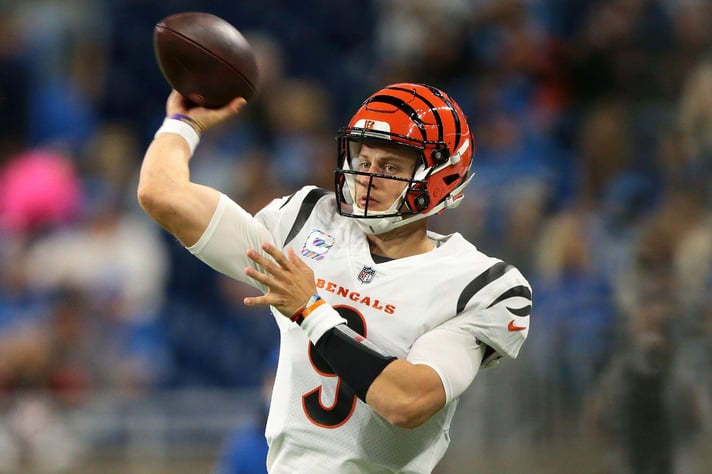 For the first time in a long time, we don’t have any bye weeks to worry about! NFL Week 12 is here, and we’ve already seen six teams in action on Thanksgiving. With a hectic weekend in store at NFL betting sites, let’s help narrow the field a little with our Week 12 NFL DFS picks.

Check out who should be in your lineups at DraftKings and FanDuel below:

It’s worth spending up slightly to get Joe Burrow this week. The Cincinnati Bengals are likely to be without running back Joe Mixon, leaving Samaje Perine as their next-best starting option. Perine is known more for his pass-catching prowess, which should help Burrow put up some big numbers.

The Tennessee Titans are giving up the fourth-most fantasy points to opposing quarterbacks in the NFL this season. With weapons like Tee Higgins and Tyler Boyd available, and the possibility of a returning Ja’Marr Chase, expect big things from the Bengals QB Joe Burrow this week.

Murray is a bargain must-start this week. The Denver Broncos released Melvin Gordon and placed Chase Edmonds on IR following their Week 11 game against the Raiders. Now his only real competition for touches is Marlon Mack, whose last appearance was back in Week 4, and even this was only limited to special teams.

The matchup is favorable, too. They face a Carolina Panthers team who have allowed the fourth-most rushing yards in the NFL this season. With the Broncos sitting as favorite to win the matchup with NFL betting apps, there should be plenty of opportunities for Murray to carry the ball throughout the game.

Hopkins is super-expensive this week, but with good reason. The Arizona Cardinals are really struggling for offensive weapons. Marquise Brown isn’t a certainty to be back, Zach Ertz is out and emerging receiver Rondale Moore is carrying an injury.

The quarterback situation is similarly murky for the Cardinals, but Hopkins should be quarterback-proof. Whether it’s Kyler Murray or Colt McCoy under center, Hopkins should be in line for a boatload of targets, receptions and yards. In what could be a shoot-out, he looks a likely candidate to score a touchdown too.

You usually need a stack if you’re going to cash in on a contest at FanDuel or DraftKings. Hayden Hurst is a cheap way to get a potentially valuable stack this Sunday.

We’ve already made the case for the Bengals in general above. With them potentially having no run game to lean on, it’s likely there’ll be more targets to go around for everyone. Hurst has a 6-53-1 line to his name already this season. If he can produce similar against the Titans, he’s money.

This is one of the highest-price defenses on the slate, but for a good reason, the Miami Dolphins face the Houston Texans this week. The Texans will have career backup Kyle Allen starting at quarterback.

Against this high-powered Miami offense, there is no hiding place. The Texans will need to score points and throw the ball to keep up, so the Miami defence is going to get pick-six chances this week.

We expect big games from these players this week, making them interesting NFL prop bets too. You’ll find props for these players, the latest NFL odds and a whole lot more at the best NFL betting sites.