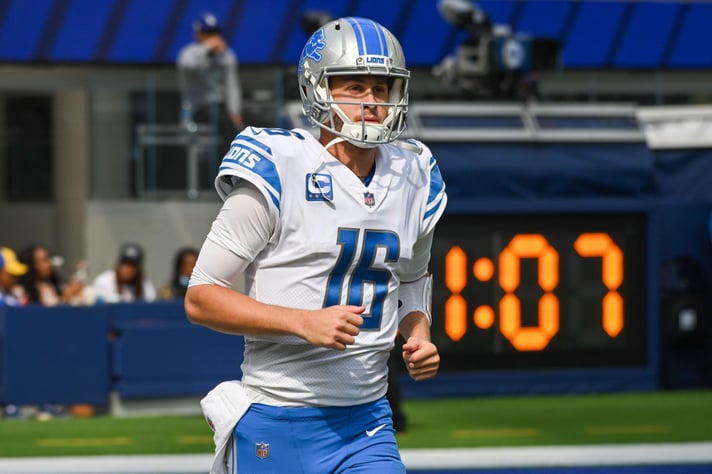 We’ve reached the business end of the Fantasy Football season, with only 1 or 2 weeks left before most leagues start the playoffs. Week 14 sees six teams on a bye, and only 10 matches on the main Sunday slate. The usual approach of targeting games with a higher points total at NFL betting sites goes somewhat out the window this week, with only one game having a line of 50+.

That makes picking a DFS lineup this week a little trickier, so the focus will be more on matchups. Check out who should be in your lineups at DraftKings and FanDuel below:

The Detroit Lions at home this season have been great for fantasy purposes. Games at Ford Field this season have averaged 63 total points. With the Vikings also among the league’s worst defenses against quarterbacks, Goff pretty much picks himself.

He’s thrown 17 touchdown passes this season and has a healthy selection of offensive weapons. Amon-Ra St. Brown (more on him later) has been a star, DJ Chark is a great vertical threat, D’Andre Swift seems healthier and has been involved in the passing game and Jameson Williams saw the field last week for the first time. Goff should be in for a massive game.

Henry hasn’t had the greatest few weeks rushing the ball by his high standards, only rushing for an average of 52 yards per week in the last four games. This week, he gets to face a Jacksonville Jaguars defence he has dominated over his career, averaging 103 yards and 15 touchdowns in 11 previous encounters. With Treylon Burks looking like he's going to miss the game, we should see the Titans lean on Henry even more than usual with both rushes and screens.

His recent poor production could see a lot of players fading him; how often do you get to have Henry in your team in a high-leverage spot in a good matchup?

St. Brown appears to come into his own late in the season. Everyone remembers his stretch to end the year last year, and he’s on course for a similar run this year. He’s posted 20+ points in three of his last four games and looks a good bet to extend that streak on Sunday.

The Vikings are the second-best matchup this season for fantasy wide receivers, and the game has the highest total points line of the week. Expect big things from Amon-Ra and stack him with Goff. He’s pricy, but most lineups at the top of DFS leaderboards this week are likely to have him.

If we’ve learned one thing about tight ends this season, it’s that if you don’t have Travis Kelce, you’re really swimming against the tide. Your best shot outside of him is to hope for a touchdown and to pick up a cheap tight end so you can load up elsewhere in your DFS lineup.

Step up Chigoziem Okonkwo. The Tennessee Titans rookie tight end has emerged somewhat recently, catching seven of 10 targets over his last two games for 103 yards. He’s an athletic, down-the-field threat, and there’s been talk of the Titans trying to find ways of getting him the ball. The matchup with the Jaguars is one of the lower totals of the week, but this could be the last time to get him in your lineup so cheaply.

Yes, the Dallas Cowboys are the most expensive defense on the slate this Sunday. But have you seen the Texans recently? Over the last three weeks, there have been five DST touchdowns scored against them. Kyle Allen was partly responsible for that, but a switch back to Davis Mills isn’t likely to be enough to stop it.

The Cowboys are the number one scoring fantasy DST this season, scoring double digits seven times. The talent they possess on the defensive side of the ball gives them a high floor, while their opposition in Week 14 gives them an extremely high ceiling.

We expect big games from these players this week, making them interesting NFL prop bets too. You’ll find props for these players, the latest NFL odds and a whole lot more at the best NFL betting apps.