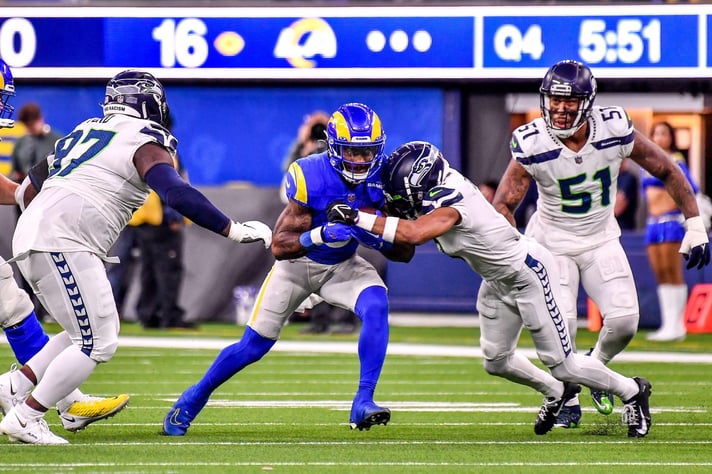 We have reached the last week of the regular season, and with a lot still to be decided in the NFL. The #1 seed is still up for grabs in both conferences. There are 13 games on the main Sunday slate this week. With only the Chiefs, Raiders, Titans, Jaguars, Lions and Packers not making an appearance, we have plenty of options for our NFL starting lineups.

Check out who we think you should start in your final DFS lineups before the postseason starts at DraftKings and Fanduel below:

As we mentioned last week, late in the season we like to stick to teams that need to win to clinch something. There is no bigger prize than the No. 1 seed, and the bye week that comes with it. The Eagles need a win here to ensure the 49ers don’t pip them to first place in the final week of the season.

Not only that, but the Giants are the No. 6 seed no matter what the outcome of this game. With Hurts at the helm, the Philadelphia Eagles have been one of the most dynamic offenses this season, with Hurts himself having the highest DraftKings points per game for quarterbacks. He could have a field day on Sunday if the New York Giants decide to rest their starters.

Usually, in Week 18 you want to stick to teams with something to play for. The Los Angeles Rams don’t fall into this category, but they also traded away all their draft picks, meaning they don’t really have an incentive to lose. They will want to put a dent in the playoff hopes of a divisional rival in Seattle.

Akers has looked much improved in recent weeks. Running for over five yards a carry for 348 yards, and with four touchdowns in his previous four games, this is probably his tryout for the lead back role next season. This week he has a great matchup against a Seattle Seahawks run defense that is one of the worst in the league. Only two teams have allowed more DFS points to running backs this season - it's Akers' turn to take advantage this week.

Mike Evans and Tom Brady are finally starting to get on the same page, something vital to the Bucs' postseason chances. Tampa has stated it's planning on playing the starters in this game, and that could be an attempt to get the offense clicking late in the season.

Evans had a monster game last week against the Carolina Panthers, with 10 catches for 203 yards and three touchdowns. He could see similar production this week playing indoors against an Atlanta Falcons team with one eye on next season, should Brady look his way again.

T. J. Hockenson is quickly becoming the first name on the DFS lineup. Following seven catches from 12 targets in last week's game against the Green Bay Packers, Hockenson is now the tight end with the most targets and receptions over the last eight weeks.

His floor is high, and as we saw in Week 16 against the Giants, his ceiling is high as well. Hockenson is a must-start this week.

The Chicago Bears announced Nathan Peterman would be the starting quarterback this week. That should be enough to make the Vikings an automatic pick. Peterman might well be the worst quarterback in recent years to make multiple starts.

He has thrown 13 interceptions and three touchdowns over a five-year NFL career, and once managed to finish a game with a DFS score of minus seven. You can count yourself unlucky if the Minnesota Vikings defence doesn’t finish this game with multiple turnovers.

The final week of the NFL season is always an interesting one for NFL prop betting markets. With players chasing season long incentives, and back-ups getting additional playing time, there are always NFL player props worth betting on.

You’ll find props for these players, the latest odds and a whole lot more on all the best NFL betting apps.