Where Your NFL Team Needs To Improve This Season 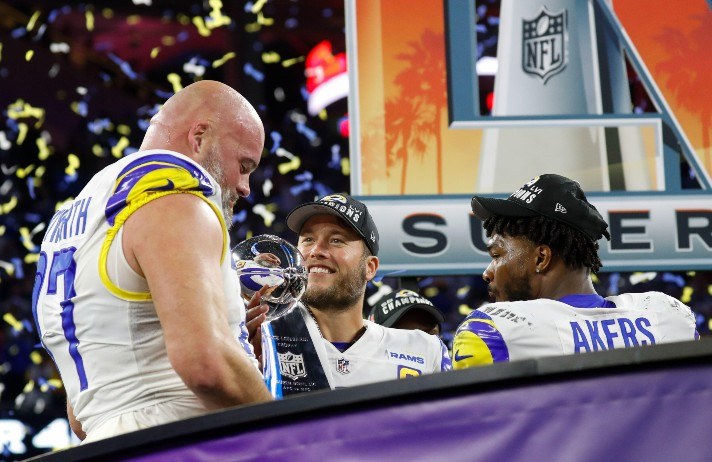 Last season's Super Bowl champions, the Los Angeles Rams, start their title defense at home to the Buffalo Bills on Thursday night. The Rams, who are among the favorites with many of the leading NFL betting sites to win Super Bowl LVII, are looking to become the first team in almost 20 years to win back-to-back championships, and they know teams will be extra motivated to beat the reigning champs.

Rams head coach Sean McVay knows that standing still is not an option in the NFL. His coaching staff will have spent the offseason looking for ways to improve, as will each of the other 31 teams that failed to win the Vince Lombardi trophy.

The Jacksonville Jaguars were the team who had the most room for improvement after their 3-14 record last season secured them the first overall pick in the draft for the second year running. The Jaguars selected quarterback Trevor Lawrence in 2021 and this year opted to draft outside linebacker Travon Walker to strengthen their defense.

Check out the odds for the Jaguars to beat Washington and the odds for all the other opening weekend matchups in our NFL Week 1 odds, spreads and betting preview. Many people will be looking to open betting accounts in time for the start of the new NFL season. And with this comes, a variety of betting offers that are the perfect way to get started with NFL betting.

Before the first snap of the new season, Bookmakers.com has analyzed the stats to bring you one area each team needs to improve if they are to enjoy the success they have planned for. 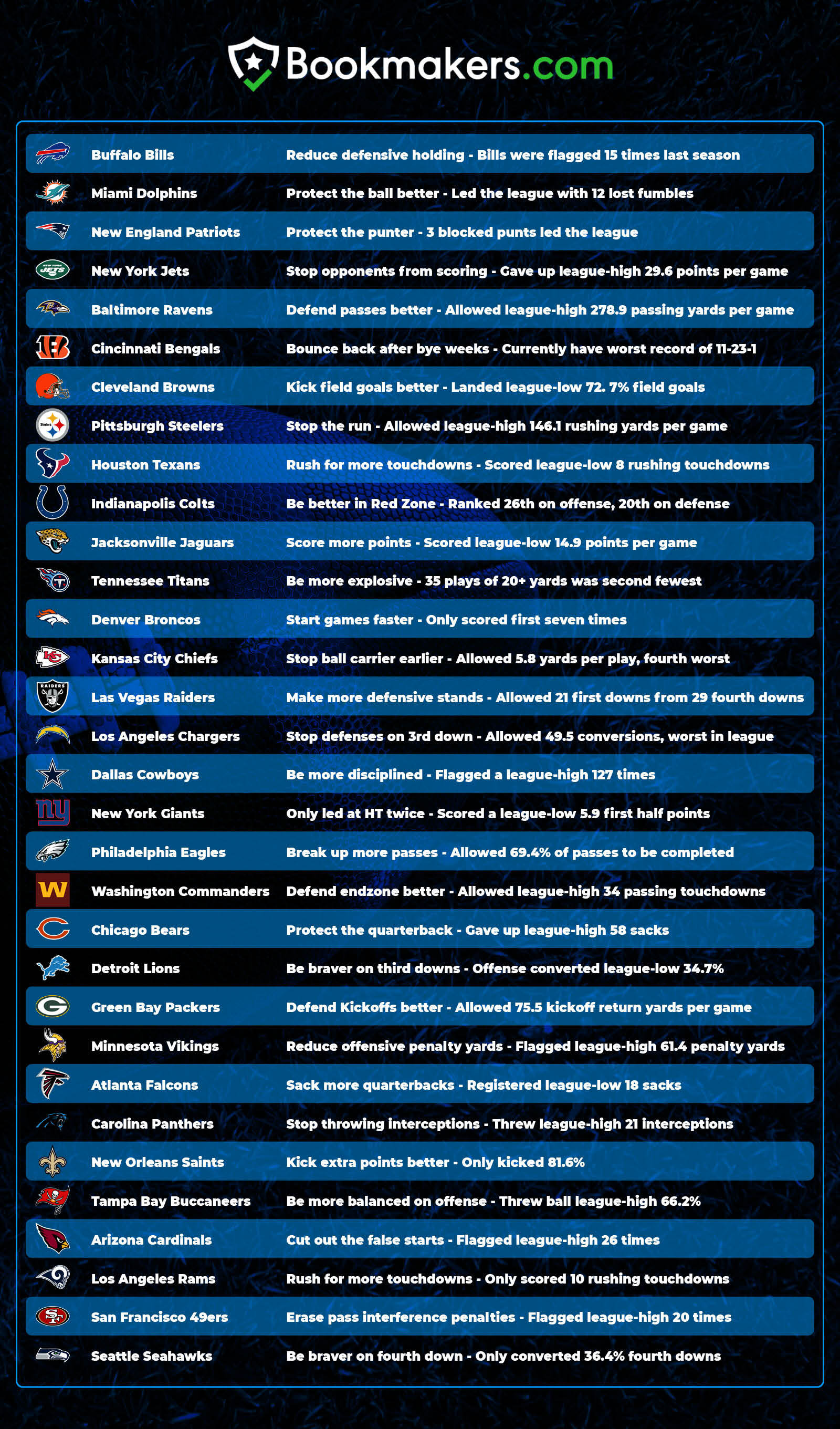 Sean McDermott’s Buffalo Bills are tipped by many leading betting sites as one of the favorites to win Super Bowl XLII. The team has been on the rise in recent seasons, and with Josh Allen leading an exciting offense, the Bills are well primed to represent the AFC in Arizona on February 12. Allen is one of the front runners in this season's NFL MVP betting market.

If McDermott and Allen are to be seen celebrating the franchise’s first ever Super Bowl, the one area of their game they need to improve is on the defensive side of the ball. The Bills were flagged 15 times for defensive holding, which led the league. Success in the NFL is hard enough without allowing the opposition to keep a drive alive by giving them an automatic first down.

First up for the Bills is a trip to Los Angeles where they will find the Rams waiting for them. Playing the defending champions in their first game will be one of the toughest games of the season for Buffalo, and we'll know more about their Super Bowl credentials after this contest.

Fumbles are one of the worst crimes in the NFL, even more so when possession is lost. The Miami Dolphins start the Mike McDaniel era at home to the Patriots hoping to start the season with a win. McDaniel has added Tyreek Hill to his offense, which gives quarterback Tua Tagovailoa a deep threat this season.

The Dolphins led the league last season with 12 lost fumbles. Fumbles are coach-killers as protecting the ball is a basic skill in the sport. Players are taught from an early age to make sure they carry the ball safely, so to see a fumble lost can shift momentum in a second.

Miami start their season in south Florida as they host the New England Patriots. It's a game the Dolphins have dominated in recent seasons, winning seven of the last nine and new coach McDaniel will hope he can continue that good run.

Since the split between Bill Belichick and Tom Brady, Brady has had the better of things, winning one Super Bowl with the Buccaneers and making the divisional round last season while the New England Patriots have one wild card loss to their name.

Punting may not be the most important facet of the game, but if you do it well, it can be a massive help. Do it wrong and it can shorten the field for the other team. New England were the only team last season to have three punts blocked, which puts pressure on the defense to stop the opposition from turning the block into a touchdown.

The Patriots will hope the don't have to line up in a punting formation but if they do, don't be surprised if Belichick tries a trick play. That's one way of avoiding blocked punts.

The New York Jets are entering the second year of the Zach Wilson era hoping the young quarterback can help Gang Green to a better record than the 4-13 they ended last season with. Making the playoffs this season might be a bit too much to ask for this season, especially if they go 0-6 against AFC East rivals.

Wilson will hope for some help from his defense whose inability to stop teams from scoring held the team back. It’s near impossible for any team to win games when they give up an average 29.6 points a games, which was the worst scoring defense of any side last season.

The opening day of the season is generally a time for optimism, but for Jets fans who have seen their team lose five of their last six opening weekend games, optimism has been in short supply. Can they get off to a flying start at home to the Ravens? After selecting Sauce Gardner fourth overall in this year's draft, we can expect to see the cornerback make the NFL lineups right from the start of the season.

The Baltimore Ravens came through yet another preseason with a 100 per cent record taking their winning streak to 23, which equates to more than a full regular season and a full postseason. However, they lost in the divisional round in each of the last two postseasons.

Lamar Jackson will lead the offense, but it’s the defense that needs to step things up this season. The quickest way to the opposition end zone is through the air, and the Ravens allowed a league-high 278.9 passing yards per game last year. If they can improve this side of their game, then they might have a chance of reaching the AFC Championship game.

Despite starting the season on the road to the Jets, Baltimore will fancy their chances of picking up the win. A loss in week 1 last year ended a run of five straight opening day victories.

Bengals Need To Bounce Back After Bye

The Cincinnati Bengals have had all of the offseason to stew on their Super Bowl LVI loss which came to an end when Los Angeles Rams defensive end Aaron Donald sacked Joe Burrow on the game’s final play. The Bengals need to protect Burrow better if they are to go one better and get their hands on the Vince Lombardi trophy.

Cincinnati needs to improve their performances in games following bye week. Since the bye week came into play, the Bengals’ record of 11-23-1 is the worst of all teams. They will have two weeks to prepare a game plan for their trip to Pittsburgh this season.

That bye week isn't until week 10, and there is plenty of football to play before then. The first step on a road they hope will lead to February's Super Bowl in Arizona begins at home to the Steelers.

The Cleveland Browns said goodbye to Baker Mayfield hoping that Jacoby Brissett can lead the offense in the absence of Deshaun Watson, who is suspended for the first 11 games. If Brissett does well, Watson might not be needed.

Whoever is under center, they will want to drive their offense into scoring positions. Last season, goal kicking was an issue, with just 72.7% of their field goals going through the uprights. Last season, they lost to division rival Pittsburgh by two points when missing a field goal that would have won the game. A dependable kicker makes a coach’s decision easier when within field goal range.

A trip to Carolina, where they will come up against Mayfield, promises to be one of the stories of the opening weekend. Brissett will be keen to show everyone that he is the best man to replace Mayfield. Scoring touchdowns rather than hoping the kicker Cade York does his job, will help.

Steel Curtain Was To Easy To Run Through

The Pittsburgh Steelers are beginning life without quarterback Ben Roethlisberger for the first time in 18 seasons and head coach Mike Tomlin will hope the team can maintain Tomlin’s record of never having a losing season. There is one thing he can work on to ensure that happens this season.

The ability to stop the run forces teams to rely on their passing game to beat them. If teams can run the ball, it opens up their offense and brings play action pass into the equation, which is difficult to defend against. Pittsburgh was ranked last defensively when it comes to stopping the run, allowing 146.1 rushing yards per game.

Tomlin's rush defense will be tested right from the first game when they travel to Cincinnati. Joe Mixon rushed for 1,205 yards last season for the Bengals while Samaje Perine is continuing to make a name for himself. Both could make it a long afternoon for Pittsburgh's rushing defense.