Which Premier League Team Benefits The Most From Festive Schedule? 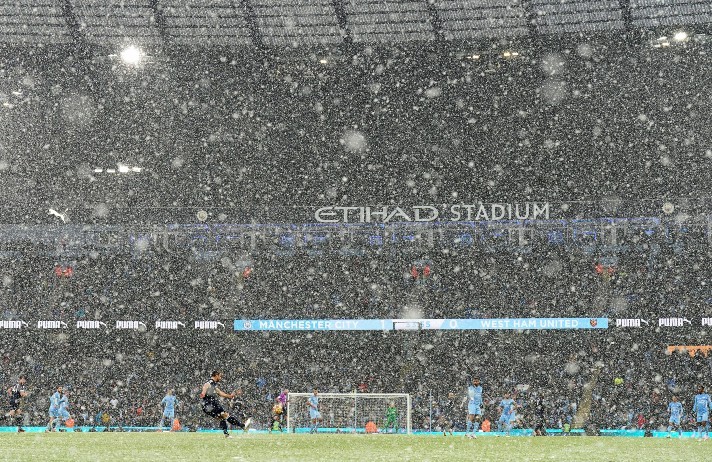 The Premier League released the schedule for its festive programme which will be the first games played following the World Cup in Qatar. The league has arranged the fixtures so that no team will play twice within 48 hours, which has been the case in previous seasons. Manchester City, who were the only team to win all three festive fixtures last season, remain the favorites with the leading soccer betting sites to retain their title.

Following the conclusion of the World Cup, the domestic campaign will resume with seven games scheduled on Boxing Day as matches have been arranged for all but one of the 11 days from December 26 to January 5. 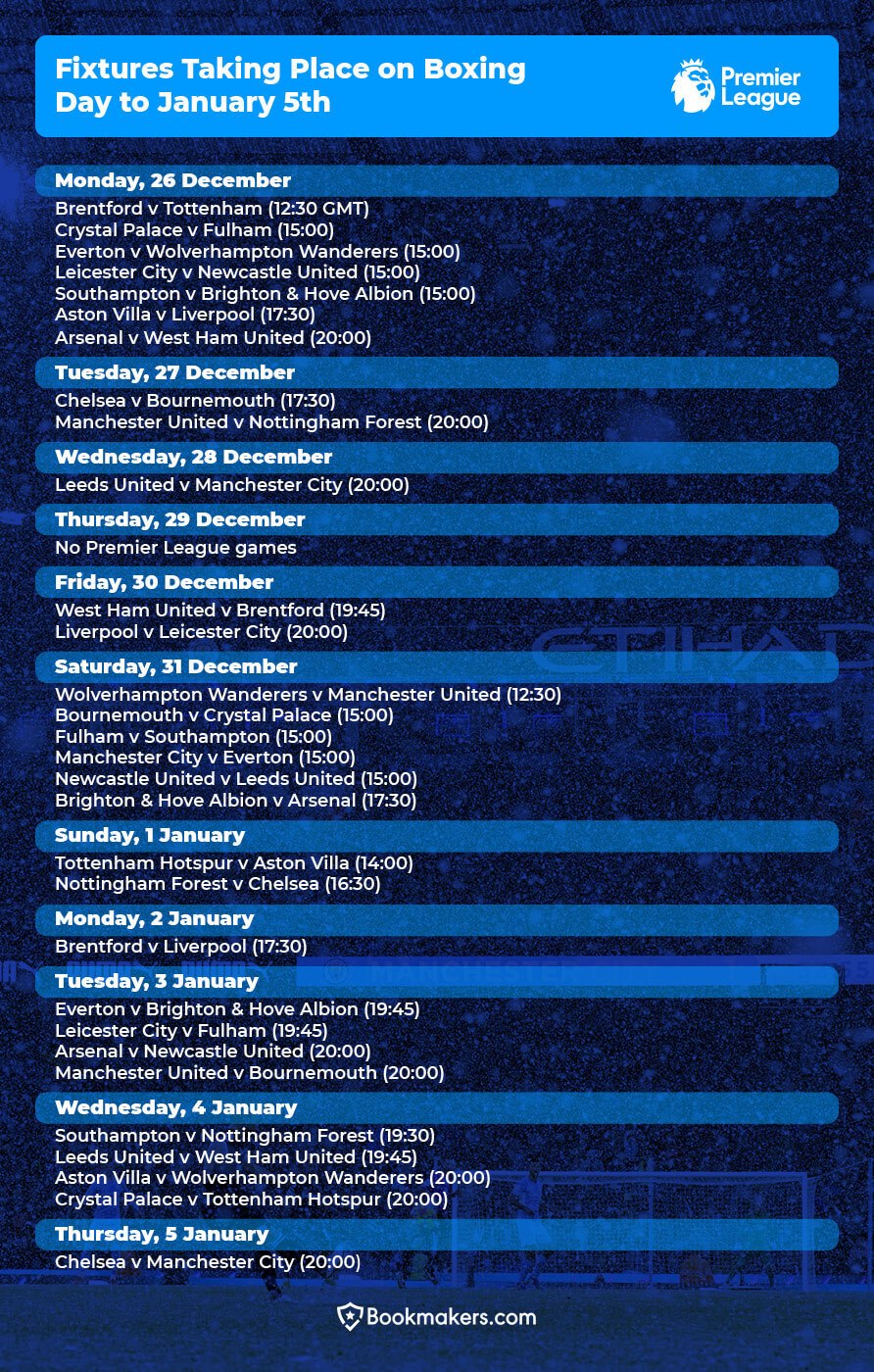 Tottenham’s lunchtime trip across London to play Brentford is the first of 30 games to start the busy period, while Chelsea’s home game with defending champions Manchester City brings the curtain down on the Premier League's festive fixtures 11 days later.

So, which team benefits from the way the fixtures fall and who has the shortest recovery time between matches? At Bookmakers.com, we’ve calculated the number of hours between the kickoff of their first festive fixture and their third and final game.

Plenty Of Recovery Time For Tottenham

Tottenham manager Antonio Conte called for time, patience and money after his side were beaten 2-1 at home by Newcastle on Sunday. Spurs stay third in the table, but Eddie Howe’s side moved to within two points of them in fourth spot.

Time is something Conte will get between games over Christmas and New Year. Of all 20 teams in the top flight, Tottenham have a total of 223.5 hours between the time they start their first game at Brentford on Boxing Day and the time they kick off at Crystal Palace on January 4.

In between those two away games, Spurs host Aston Villa to complete a hat-trick of festive games in the capital in 10 days. Conte’s side have a total of 145.5 hours between the start of their first game and the kickoff of their home game with Villa. There’s a further 78 hours before their game at Selhurst Park gets under way.

A look at Tottenham's stats for the season shows that they have less than 50% of the ball in their games. Conte needs to use the most time between games to find a way of increasing that average if they are to mount a challenge for the title in the New Year. A lack of time to prepare his team will not be accepted as an excuse if Conte cannot guide his side through the Christmas period unbeaten. 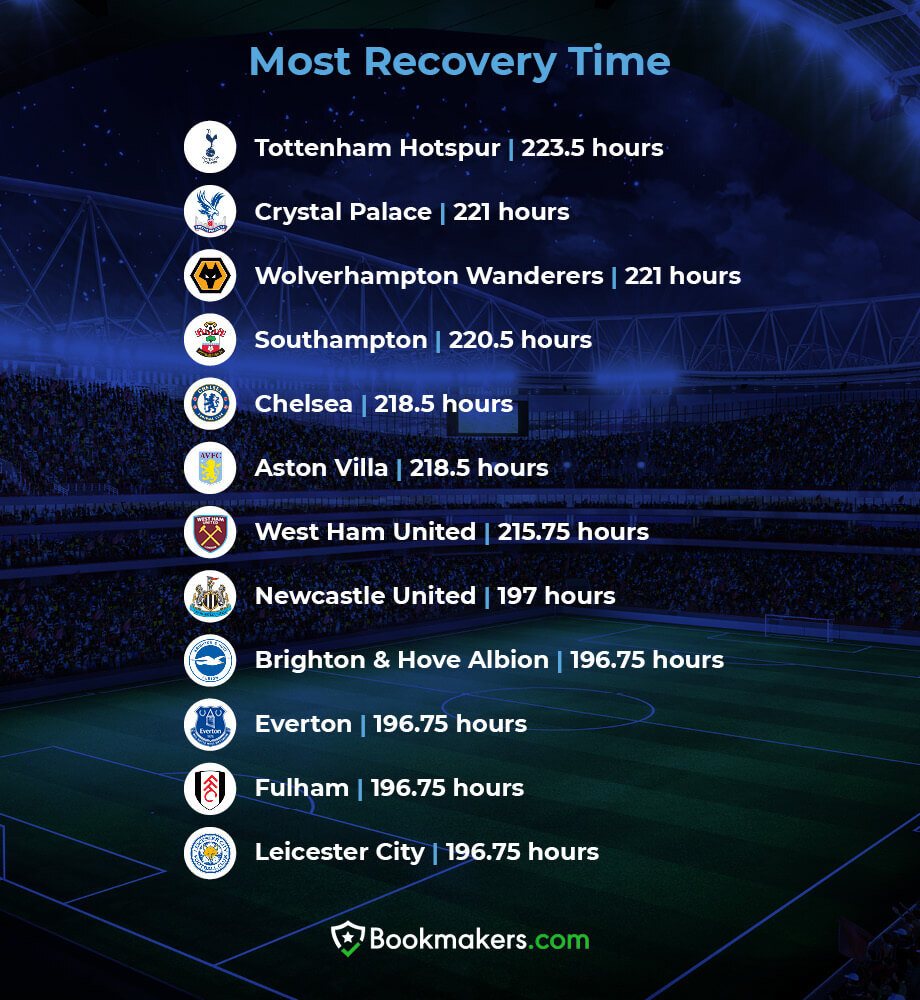 Palace and Wolves are two teams that need as much time on the training ground as possible. Wolves dropped into the relegation zone following their 4-0 home defeat to Leicester last weekend, while Palace are only four points clear of the bottom three after losing 3-0 at Everton.

Crystal Palace's data this season, shows that Patrick Vieira's side have conceded more goals than they have scored. The Eagles travel to Bournemouth in their second game on New Year's Eve, 120 hours after hosting Fulham on Boxing Day. Their third and final game at home to Spurs comes 101 hours after their game with the Cherries gets under way.

According to Wolves' statistics, they have scored the fewest goals of any side in the Premier League with five. The club have said they won't appoint a new manager until 2023. Interim manager Steve Davis has a chance of making his role permanent if he can string together some positive results. A trip to Everton is followed 117.5 hours later with a home game with Manchester United on December 31. A trip to neighbours Aston Villa promises to be a fiesty finale to the festive fixtures for the Molineux side.

Before the Premier League’s inaugural season started in 1992, Christmas fixtures were split over three days. Every team kicked off at the same time because there was no commitment to television companies who pay billions for their fair share of live games.

As a result of those demands, festive fixtures are split. Games will kick off at 21 different times this season, and while measures have been taken to ensure equality, some teams will not get as long to recover between games as others.

According to Liverpool's stats, they have an average possession of 61.2%, but they are well off the pace at this stage of the season. Reds manager Jurgen Klopp is not afraid to speak out about the scheduling of games in the Premier League, and the Reds boss won’t be happy with how his side’s festive fixtures fall.

The Reds travel to Aston Villa on Boxing Day before welcoming Leicester to Anfield 98.5 hours later. Liverpool’s first game of 2023 is at Brentford on January 2. Three games in 168 hours is joint second worst. It will be a challenge for Klopp, but at least he has experience of how to plan for the Premier League's busiest period.

This will be Erik ten Hag’s first experience of games over Christmas and the New Year in England. Before replacing Ralf Rangnick as the Old Trafford boss, Manchester United’s Dutch boss had only managed in his native Eredivisie, which takes a break for a month just before Christmas. Manchester United's stats show they are the only team in the top six who don't have a positive goal difference.

Like Liverpool, United play their three festive games in 168 hours. Nottingham Forest travel to Old Trafford in the first game on Boxing Day before a journey to Wolves starts the Premier League action on New Year’s Eve. United’s third game before the league takes another break for the FA Cup, is at home to Bournemouth on January 3. 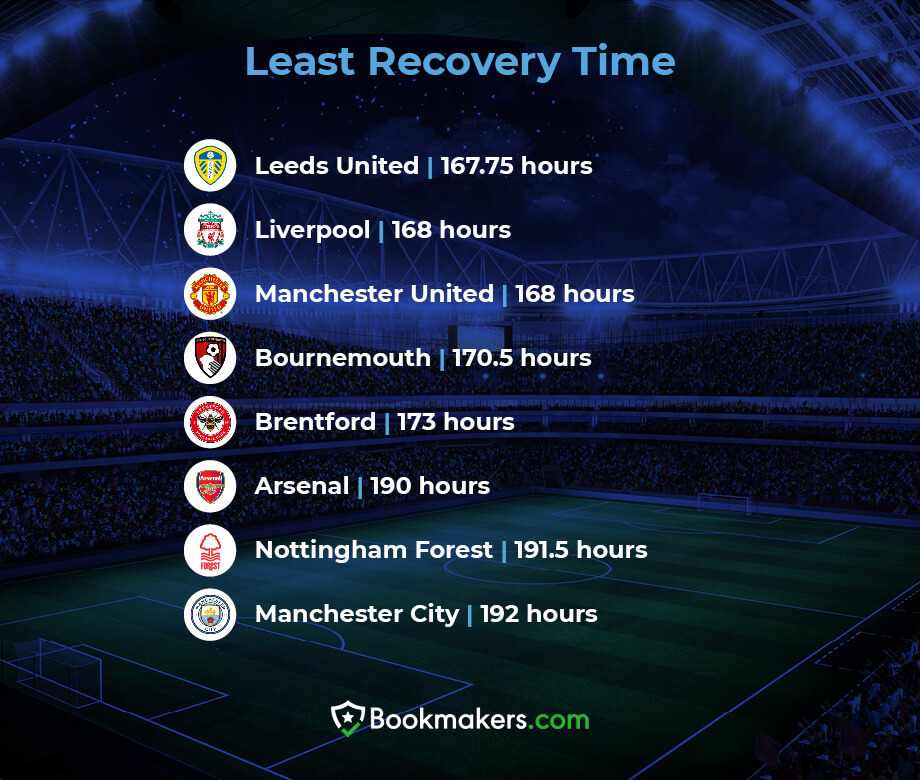 Leeds' stats show that they are conceding 1.44 goals per game this season. That's one reason why they are struggling at the wrong end of the Premier League table. The more time they can spend working things out on the training ground, the better their chances of survival will be. Time looks to be running out on American Jesse Marsch, who will hope to remain in the technical area for Leeds' three games in eight days.

Three games in just 167.75 hours is the most congested schedule for any Premier League side this Christmas, and it doesn't give Marsch, or whoever might be in charge of the Elland Road side, time to address the issues that have seen them drop to 18th in the standings.

A trip to fourth-placed Newcastle kicks off just 67 hours after the Whites host Manchester City on December 28. Leeds' third game is at Elland Road when West Ham are the visitors on January 4. Nobody can be relegated as a result of their three games at the end of December and the start of January, but these matches can define a season.