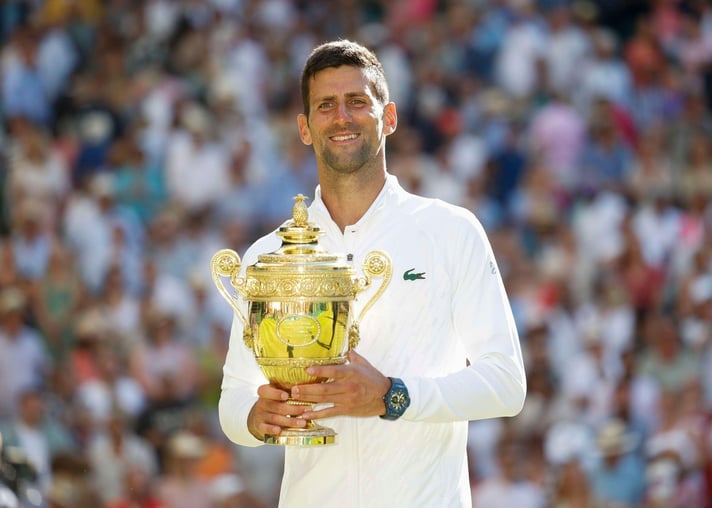 Wimbledon is the third Grand Slam tennis tournament of the calendar year. It takes place in south-west London every summer, with the top-ranked professional male and female players competing for one of the most prestigious prizes in the sport.

Many tennis fans like to place bets on the fortnight of action at Wimbledon, and there is always healthy competition when it comes to the men’s singles and ladies' singles. The former competition involves best-of-five set matches, while the female equivalent is best-of-three.

The Wimbledon outright winner markets are available on the best tennis betting sites year round, and the majority of outright wagers are placed once the draw has been made for the gentlemen’s singles and the women’s singles. There is the chance to either bet win only or alternatively have an each-way bet. In addition to this, you can sometimes back a player to win their particular quarter.

The Wimbledon Championships didn’t take place in 2020 due to the COVID-19 pandemic. However, Novak Djokovic has won the men’s singles in the last four years that there has been a tournament. The Serbian will be among the favorites when it comes to the 2023 renewal, and he’s looking to land an eighth success.

Should Djokovic land one more Wimbledon crown, he will draw level with the recently-retired Roger Federer. Matteo Berrettini, Daniil Medvedev and Carlos Alcaraz represent a new wave of players who could potentially challenge for major honours, while Rafael Nadal will look to add to his two successes at SW19.

The 2023 Wimbledon ladies singles tournament could be a more open affair, with no guarantee that clay court specialist Iga Swiatek is going to land a maiden victory in this Grand Slam event. Elena Rybakina and Ons Jabeur were the two players left standing in the 2022 tournament, and they are prominent in the market on tennis betting sites.

As with clay, there are a number of players who are better suited to the grass surface than others. The first port of call is to identify the players who have previously performed well at Wimbledon tournaments along with the other grass events.

In recent times, the women’s singles has been a good deal more open, and that means that players have reached the final, who were available at bigger odds on betting sites. In the past six renewals of the ladies' tournament, there have been unique winners on each occasion. An additional four different players also made the final and finished runner-up.

Conversely, the Wimbledon men’s singles has yielded a much smaller number of unique winners over the past few years. Players such as Pete Sampras, Roger Federer and Novak Djokovic have all been serial winners of the championship, and the latter pair were involved in an epic final in 2019, that saw Djokovic claim a tie-break victory.

How to Back Winners on the Wimbledon Outright Market

Ultimately, you are looking to wager on the player that you think will win the men’s singles or the ladies' singles. You can even choose to place a double, and aim to predict the winner of both tournaments. There is generally a smaller pool of male players who have the capability of winning, and it can often pay to stick with one of the favorites, especially if they have a strong track record.

When it comes to Wimbledon, it is sometimes advisable to keep your powder dry and see how the first few matches play out. You are then able to visit your tennis betting site of choice, and wager on the revised tennis odds for the outright markets. It can be worth betting each-way if you are looking at a selection trading at a big price on your sports betting app. This is so that you can get a guaranteed pay out if they reach the final.