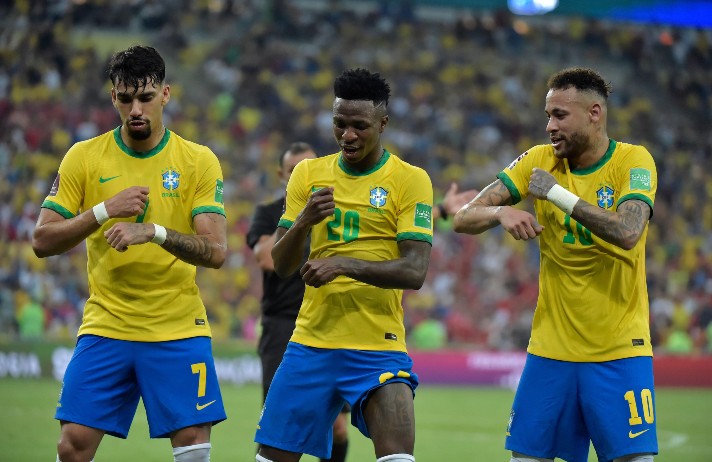 As Qatar prepares to host the World Cup, we at Bookmakers.com have delved into the history books to bring you the ultimate World Cup betting guide.

Since the tournament began in Uruguay in 1930, 900 matches have played in the 21 World Cups to date. Mario Mandzukic’s goal for Croatia in their 4-2 defeat to France in the 2018 final, was the 2,548th goal scored in the history of the World Cup.

Eight different nations have been crowned world champions, with Brazil leading the way with five titles, and they are one of the favorites with many of leading soccer betting sites to win it all this year.

France are looking to become the first country since Brazil in 1962 to win-back-to-back World Cups, but they face tough competition from a number of well-backed nations. This year’s tournament promises to be the biggest ever in terms of wagering as more and more countries pass legislation to allow online sports betting.

We look at trends that have occurred in past World Cups that could help you beat the bookies this year. Keep checking the leading World Cup betting sites to see if they are offering any free bets during the World Cup.

1-0 Remains The Most Frequent Score

Qualifying for the World Cup is one thing, but performing well at the tournament is another. Teams can coast through the qualification group stage scoring goals for fun to ensure they finish top of the group and avoid the need of a playoff.

So, it's no surprise that teams take a cautious approach when it comes to the World Cup tournament itself. There wasn't much caution shown when the World Cup was added to the calendar. Only six of the 53 games played in the first three tournaments ended in a 1-0 score. That equates to 11.3%.

In total, 18.4% of the 900 games played have ended 1-0. Only one of the 21 World Cup finals has been decided by a single goal within 90 minutes, and that was when Andreas Brehme's penalty five minutes from time was enough for West Germany to beat Argentina in the Stadio Olimpico in 1990. 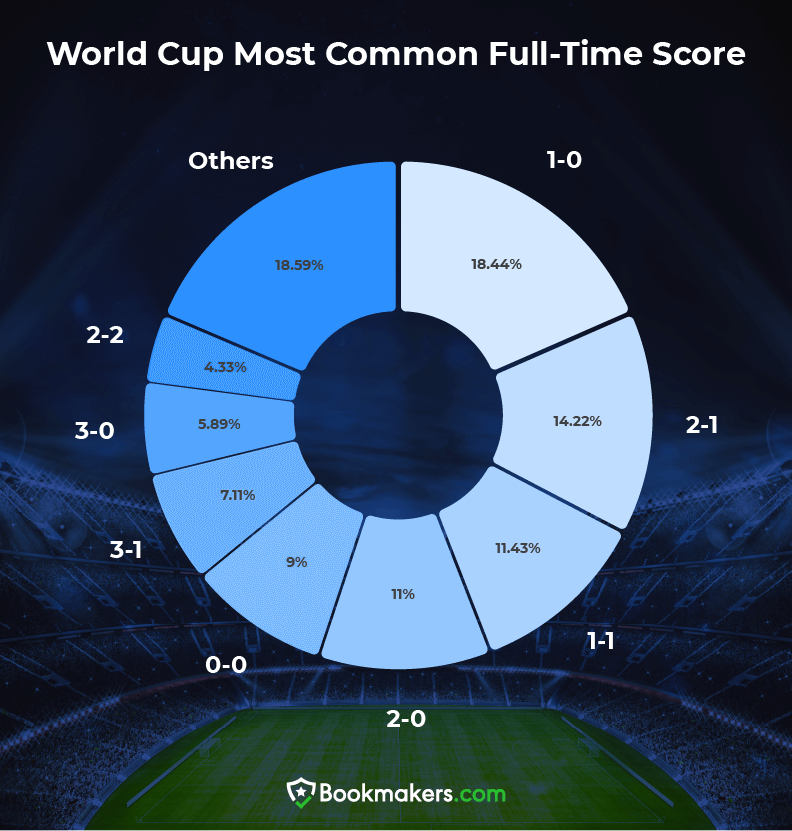 And it's a similar story with half-time scores. 1-0 is the most common score. It has been the score at the interval in over a third of all the games played at the 21 World Cups.

Belgium's 1-0 half-time lead over England in the third-place play-off game in Russia was the 313th game (34.8%) in which only one goal had been scored before the break. 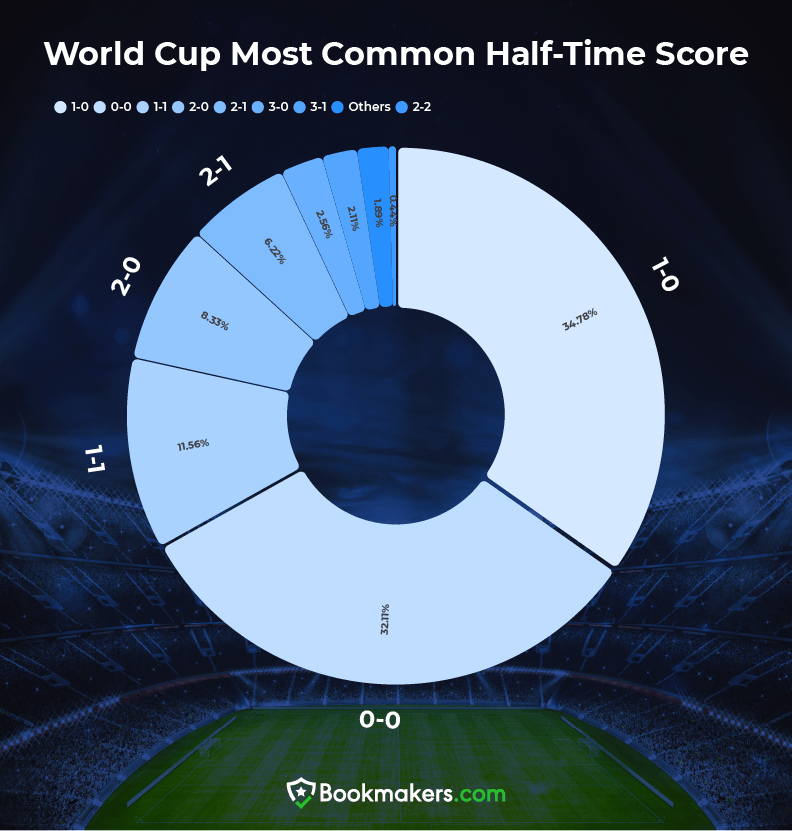 There’s Always A 2-1 Win At The World Cup

In the 21 World Cups played to date, only one scoreline has been an ever-present, and that’s a 2-1 win. The first-ever 2-1 win came on July 14, 1930 when Yugoslavia beat Brazil after leading 2-0 at the interval.

The most recent 2-1 win in a World Cup came when Belgium beat Brazil to book a place in the semi-finals in Russia four years ago. A Fernandinho own goal and a stunning long-range effort from Kevin De Bruyne gave the Belgians a 2-0 lead at the interval. A Renato Augusto header reduced the arrears, but Belgium saw the game out.

A 2-1 result ticks both boxes for two of the most popular wagers when it comes to football betting. It means both teams scored and over 2.5 total goals has also landed.

At the last World Cup in Russia, 13 of the 64 games ended 2-1, which was only two fewer than a 1-0 score, which was the most popular result after 90 minutes. Of those 13 games that finished 2-1, 11 came in the group stage, which might be worth considering this year if you plan to place a bet on your soccer betting apps.

When the 13 teams travelled to Uruguay for the first World Cup in 1930, nobody knew what to expect. The tournament certainly didn't have the hype surrounding it like this year's World Cup. And we had to wait 48 years for Panini to produce its first sticker album.

With no great levels of expectation on the players, each team played with freedom, which produced some very high-scoring games. The first two games, played simultaneously, produced eight goals. Of the 18 games played in Uruguay, 14 (77.8%) saw three or more goals scored.

However, as pressure increased on nations to do well at the World Cup, managers adopted a more conservative approach to games. Of the 64 games played in Russia four years ago, over 2.5 total goals was a winning bet 29 (45.3%) times. 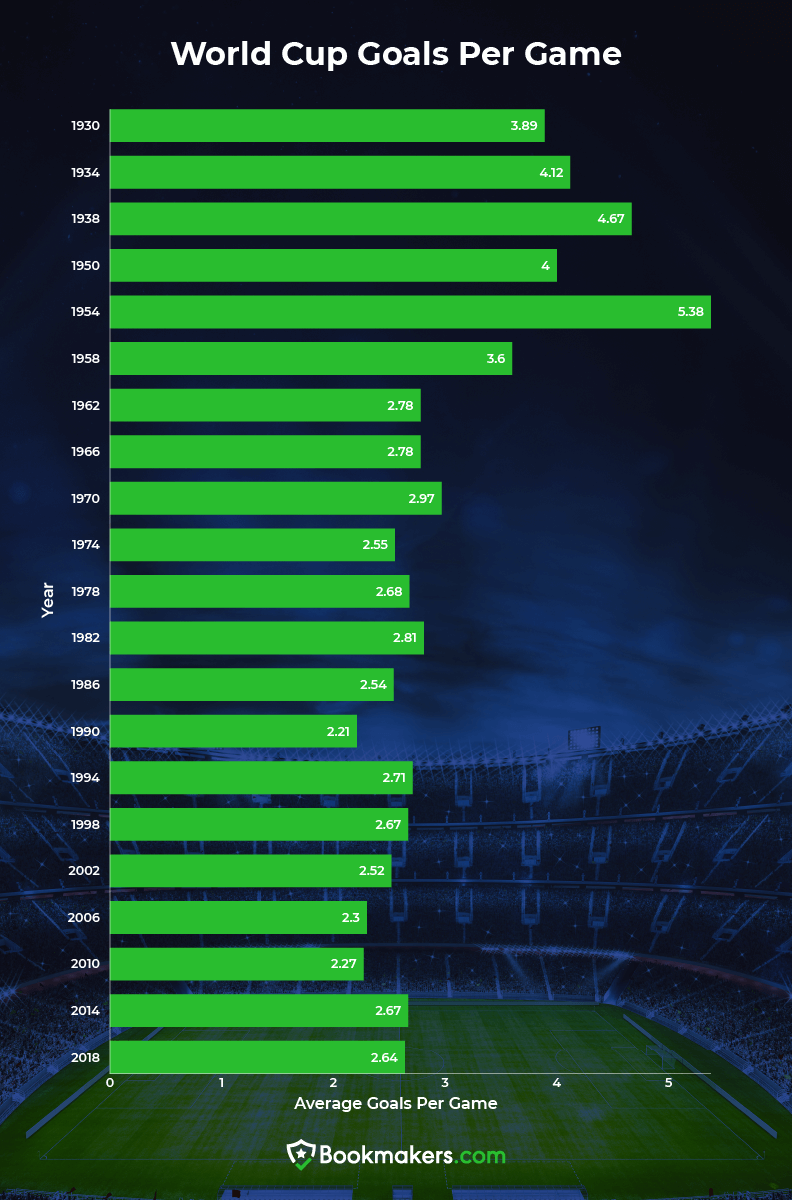 That percentage drops further when it comes to the knockout stage. Only five (31.2%) of the 16 sudden-death games saw a minimum of three total goals scored. Under 2.5 total goals was a winning bet in four of the last five World Cup finals.

Both Teams To Score On The Decline

The World Cup cannot be won in the group stage, but it can be lost. With only three group games to progress to the knockout stage, every game means something. Starting with a win takes a lot of pressure of a manager, and he can set his team up accordingly for the remaining two games.

The ideal scenario is to win games one and two, secure qualification and perhaps rest certain players. A team that opens the scoring can be forgiven for shutting up shop and preserving their energy in the hope of reaching the final. 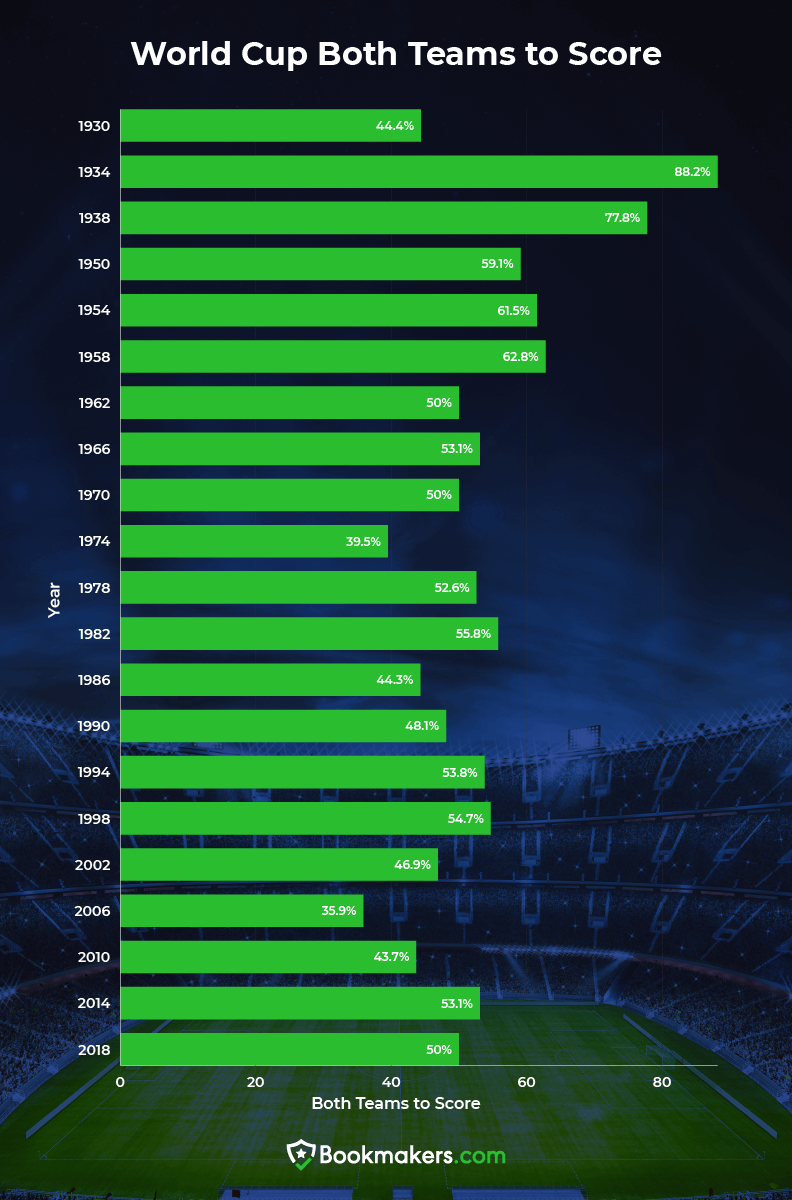 When it gets to the knockout stage, the scenario changes. A team that falls behind on the scoreboard have no choice but to go for it and throw the kitchen sink at their opponents.

In two of the last three World Cups, over half of the 16 sudden-death games have seen BTTS land. In South Africa in 2010, both teams to score landed in nine (56.3%) knockout games, and eight years later 10 (62.5%) saw the popular bet pay out. If you think that trend will continue in this year's tournament, visit your favourite soccer betting sites and place your bet.

One thing we can expect from this year's World Cup, is slow starts and frantic finishes. The World Cup is an opportunity for teams to face other countries they rarely get to play. A European nation won't get to play a South American team because of the fixtures schedule that now includes the Nations League.

Because there is no recent history between some nations facing each other, it takes a while to figure out how the other is set up. That might explain why many matches are slow-burners with chances few and far between. Only 334 (13.1%) of the 2,548 total goals scored since 1930 have been scored in the opening 15 minutes.

Never in the history of the World Cup has there been more goals scored in the first half than the second. The 1978 World Cup in Argentina, won by the hosts, saw 51 goals scored before half-time and 51 netted in the second half before extra-time. 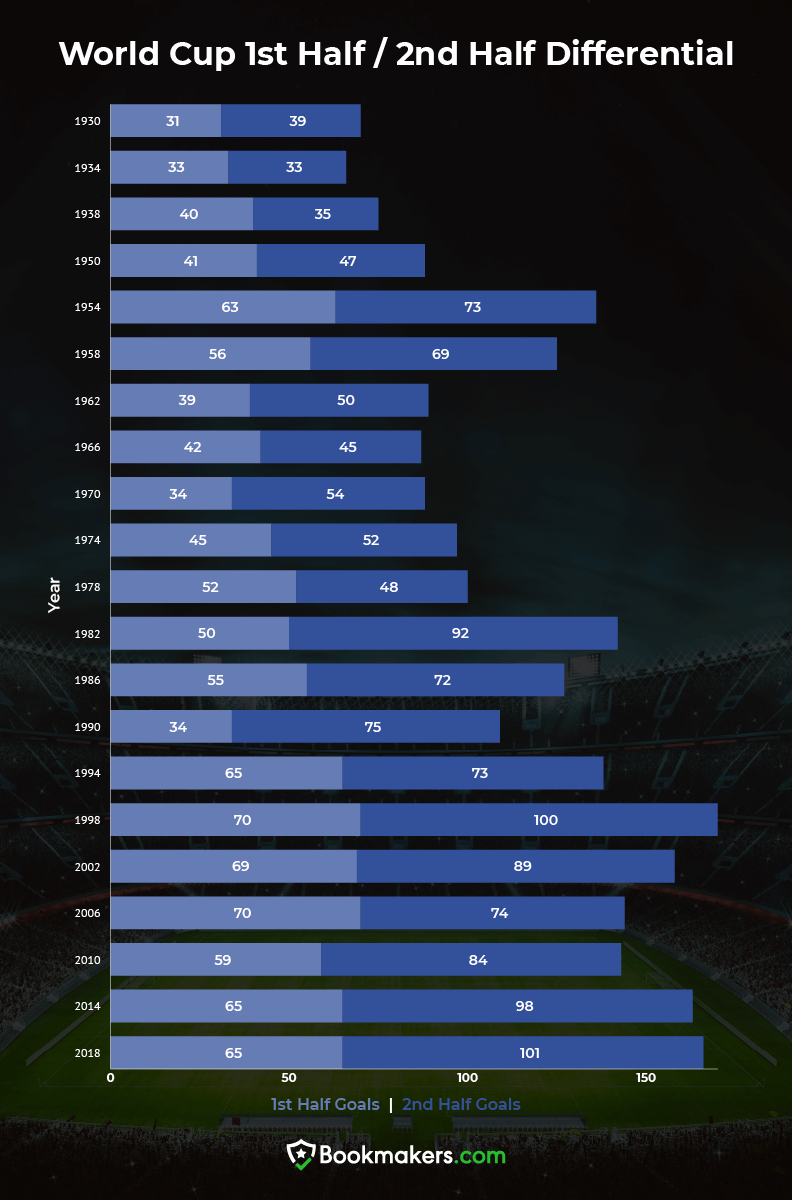 VAR will once again be in operation in Qatar, which means matches will go well beyond 90 minutes. There is every possibility we will see a game last over 100 minutes of normal time, before we even get to extra-time. Therefore, it might be worth considering betting on plenty of goals scored between the 76th minute and full-time.

Of all the goals netted in World Cup tournaments, 534 (21%) have come in the final 15 minutes and injury time. That's 200 goals more than the first 15 minutes. Another reason why so many more goals are scored so late on is because teams are attacking more to get something from a game. And as they press for a possible equalizer or a win to take them through to the knockout stage, they could leave themselves exposed at the back and concede. 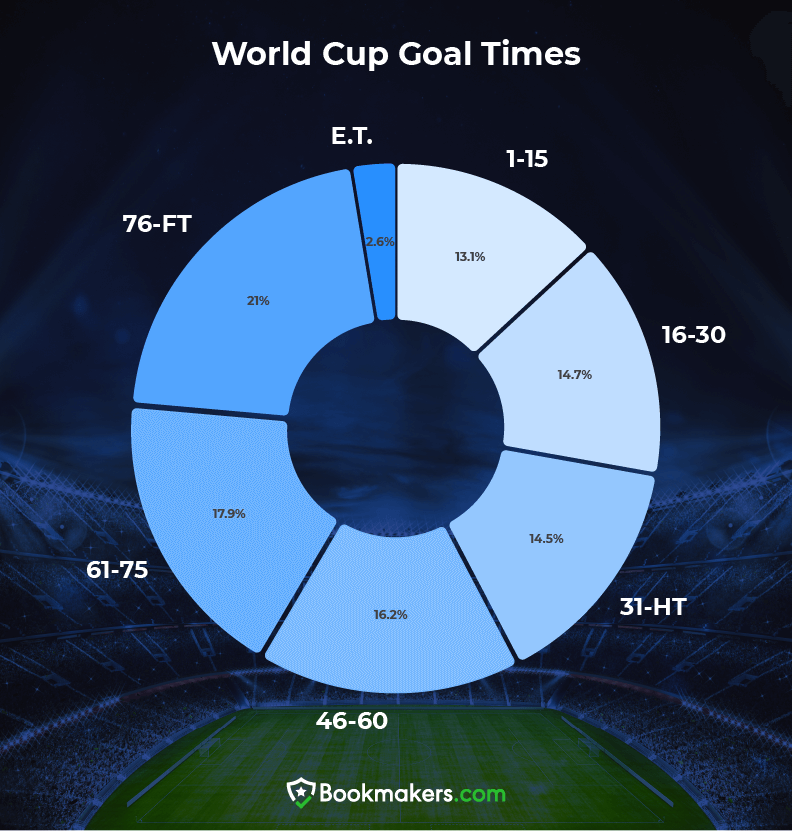 The World Cup is the biggest occasion in the soccer calendar, and the hype that comes with it is understandable. When the day of the opening fixture finally arrives, everyone is hoping for a blistering start to set the tone for the rest of the tournament.

However, when FIFA decided to select standalone games to start the tournament, the demand for goals fell on deaf ears. Before the 1966 tournament, multiple games took place at the same time to get the World Cup up and running.

At Wembley in 1966, hosts England faced Uruguay in the first game. What followed was a dour goalless draw. It set a precedent for World Cup openers for the following eight tournaments. From 1966 to 1994, the eight opening games produced a paltry total of five goals.

In 1990, Cameroon produced arguably the shock of the tournament when they toppled Argentina, who were hoping to start their title defence with a win. Francois Omam-Biyik was the hero that day for Cameroon. who had two men sent off. In the United States four years later, Germany started their defence against Bolivia, and a Jurgen Klinsmann goal from the edge of the box was enough to beat the South Americans.

Thankfully, since then, the goals have flowed with 21 goals in the last six opening games. The last two opening games have produced nine total goals. In 2014, hosts Brazil opened their campaign with a 3-1 win over Croatia with Neymar scoring twice. At the most recent tournament, Russia hammered Saudi Arabia 5-0 thanks to two goals from Denis Cheryshev. What will this year's World Cup opener between Qatar and Ecuador produce on November 20? 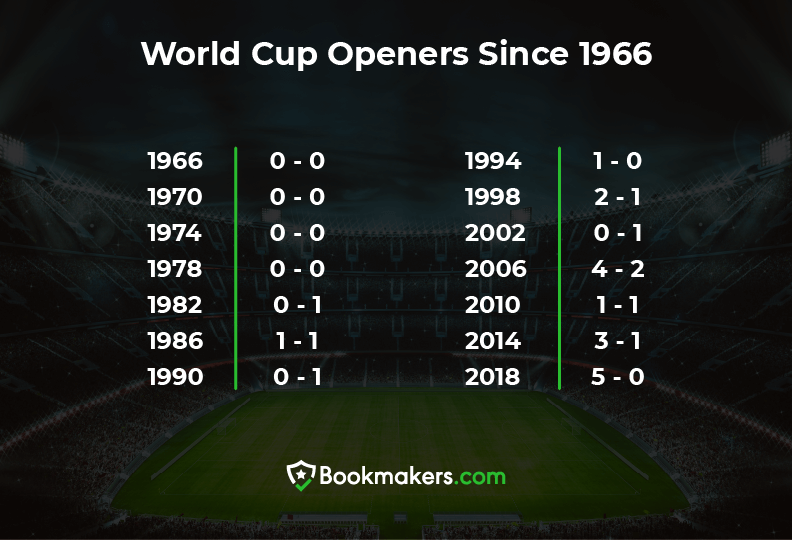