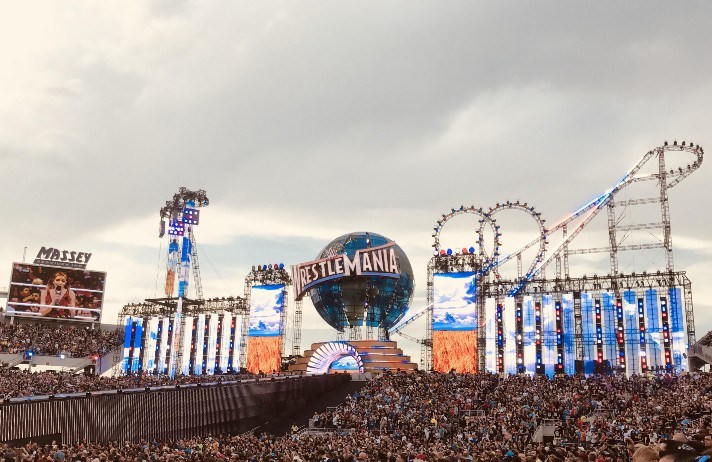 The road to WrestleMania 38 reaches its destination as the WWE rolls in to Arlington, Texas, on April 2nd and 3rd. The two-night extravaganza will see some of wrestling's biggest superstars, huge celebrities and all of the spectacle fans have come to expect from the Showcase of the Immortals.

We'll see Logan Paul, Pat McAfee and Johnny Knoxville in action, as well as an appearance from Stone Cold Steve Austin. Marquee names such as Ronda Rousey and Brock Lesnar also have huge matches, while the wrestling world anticipates seeing Cody Rhodes make his 'surprise' return to the WWE after a few years in AEW.

It may be surprising to some that there is betting available on a scripted event, but WrestleMania betting has proved to be hugely popular with bettors. Not every sports betting site will offer it, but those that do will either have it listed under specials or have a dedicated WWE betting odds section on site.

A lot of the matches are predictable, and the WrestleMania betting odds tend to reflect that. Historically, WrestleMania is where storylines end, usually with the babyface (the good guy) having his arm raised. Surprises have happened in the past, however, like Brock Lesnar ending the Undertaker's WrestleMania streak at WrestleMania 30, which nobody saw coming.

With that being said, let's take a closer look at the match card for April 2nd and 3rd and jump into our WrestleMania predictions.

The WrestleMania card is subject to change, even after the show has started. The same goes for odds at USA sports betting sites mentioned below. All odds are correct at the time of writing.

Roman Reigns has become the new face of the WWE, particularly since becoming a heel (a bad guy). He's been unstoppable, and the Head of the Table should pick up the win to unify both titles and further cement his legacy. Defeating the man who ended the Undertaker's WrestleMania streak in the process puts him on a whole new level of stardom. His 1/3 odds are short but fair.

Bianca Belair was the feel-good story we all needed in 2021. Despite Lynch's popularity, her surprise return and dethroning of Belair wasn't greeted with the same delight it otherwise would have been. Belair (1/4) gets her WrestleMania moment and beats The Man.

On a night where a lot of the results go the way of fan favorites, The Usos retain the Smackdown Tag Team Championships. Their 2/5 odds are skinny, but they probably should be skinnier. Boogs and Nakamura aren't as over with the fans as they need to be to get the reaction a title change on such a stage would deserve.

WrestleMania gets some added star power when Logan Paul teams up with The Miz. The Mysterios get a great moment, as the father and son pick up a win on the grandest stage of them all at odds of 1/2. The Miz blames Paul for the loss and gets knocked out for his trouble, sending everyone away happy.

There’s not a whole lot needed on this. Drew McIntyre wins. His odds of 1/10 pretty much tell you everything you need to know.

Ronda Rousey has been on a rampage since winning the Royal Rumble in January. She's 1/5 favorite to beat Charlotte Flair and win the Smackdown Women's Championship. Since this match is expected to headline the first night of WrestleMania 38, we fully expect Rousey to win and for fans to get the ending to the April 2nd action that they want.

In a semi-rushed storyline, AJ Styles and Edge have seen their roles reverse, with Edge becoming the de-facto heel. Neither man has anything to prove, but Edge is undoubtedly the one with less time remaining in his career. He can give AJ Styles the win here, giving him a rub before he returns to his part-time schedule. Backing Styles at 4/5 looks like the play.

Sami Zayn's conspiracy theorist gimmick has been a highlight of the WWE recently. Expect shenanigans and perhaps some help from the rest of the Jackass crew to help Johnny Knoxville get the win. He's 2/5 to do so.

Like him or loathe him, Pat McAfee is a breath of fresh air. Without having some external help, there's no way he should be beating Austin Theory, who has Vince McMahon's backing. Theory is 4/7 to win, and his odds should be a lot shorter.

RK-Bro (Randy Orton and Riddle) come into this one hot. The unlikely pairing has lasted much longer as a team than we all thought. Expect the pair’s time as a team to come to an end at WrestleMania when one turns their back on the other. Street Profits should walk out new Raw Tag Team Champions (odds – 9/4).

Champions Carmella & Zelina Vega defend their titles against Sasha Banks & Naomi, Rhea Ripley & Liv Morgan and Natalya & Shayna Baszler. This is a lower spot on the card for Sasha Banks than many would have expected a year or two ago, but her team should justify their 2/5 odds and walk away with the gold.

Many sports betting sites offer great welcome bonuses all year round, but they tend to ramp them up around the time of big events. While WrestleMania betting is growing in popularity, it's unlikely there'll be many betting offers specifically aimed at it.

Some of the offers that are generally available are:

Risk-Free Bets – place a qualifying bet and get a free bet for the same amount as your first stake if it loses.

Matched Deposit Bonus – Make your first deposit and receive bonus funds based on your amount. This is often 50% or 100%, but it can sometimes be more.

No-Deposit Bonus – Simply open an account and receive some bonus funds. This is one of the rarer welcome bonus types.

Promo Codes – During the registration process or perhaps when making your first deposit, enter a promo code to receive a bonus. There are no WrestleMania promo codes at the moment, but they will be listed right here if any become available.

For different new customer betting offers, registration via a particular link will be required. If you find an offer here at Bookmakers.com, click on the link to claim the offer, open your new account and enjoy your welcome bonus.

Where can I watch WrestleMania?

The first port of call for fans looking to watch WrestleMania 38 will be the WWE Network. It's a subscription service that gives you access to WWE PPV's and on-demand content. This option is available in the majority of regions around the world and will be the most widely used.

There are some other ways to watch WrestleMania 38, though, depending on where you are. United States residents can subscribe to Peacock, while those in the UK and Ireland can order the event on BT Sports Box Office.

Yes, some sports betting sites offer betting odds for WrestleMania and selected other WWE events. This is a surprise to many, as it is a pre-determined event, but bettors will find match betting, prop betting and other betting markets available.

Where can I bet on WrestleMania?

Not every sports betting site will offer WrestleMania betting odds and markets. However, many of the top betting sites found here at Bookmakers.com will. The odds will either be listed under Novelties/Specials or the bookmaker will have a WWE betting section.